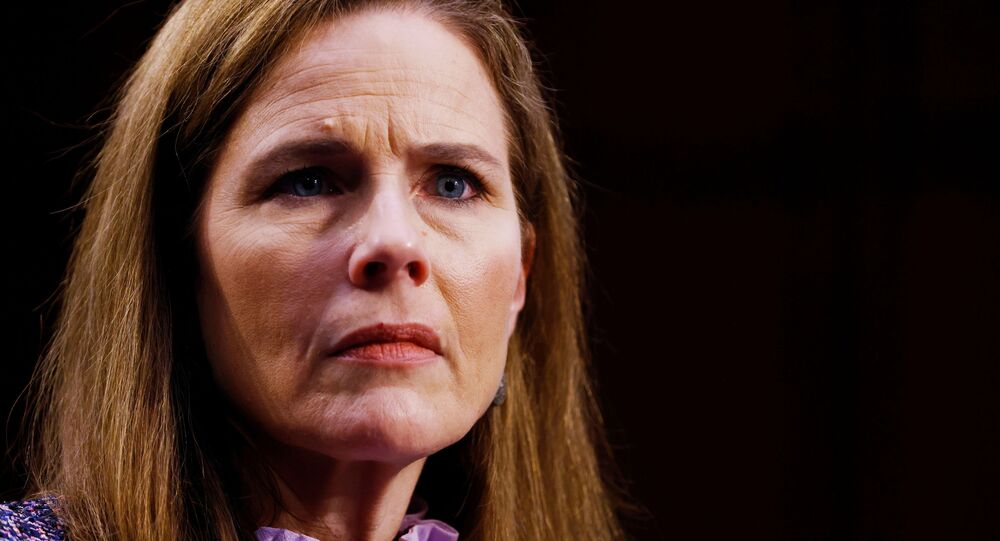 Judge Amy Coney Barrett‘s failure to name all five freedoms guaranteed under the First Amendment to the US Constitution has left many netizens baffled and furious as the Supreme Court nominee’s confirmation hearing continues before the Senate Judiciary Committee.

Netizens’ jaws were left on the floor Wednesday after Sen. Ben Sasse (R-NE) asked Barrett to enumerate the five freedoms guaranteed under the First Amendment. What many would view as a softball question turned out to actually stump the woman vying for a lifetime appointment on the US Supreme Court.

“Speech, religion, press, assembly," said Barrett, counting the freedoms on her fingers. "I don't know, what am I missing?"

Sen. Ben Sasse: "What are the five freedoms of the First Amendment?"

Netizens were quick to comment on Barrett’s forgetfulness, and many called out the fact that she had been lauded for her presumed intelligence and sharp memory after displaying a blank notepad during Tuesday’s hearing.

And the right was gassing her because she didn’t have any notes on her notepad 🙄 https://t.co/l8LL2yoV34

Amy Coney Barrett:
- Can't tell you the 5 Freedoms in the 1st Amendment
- Doesn't know it is illegal to commit Voter Intimidation
- Won't tell you it is unConstitutional to unilaterally postpone the Presidential Election
- Can't remember if she met with Trump before nomination
😑

Amy Coney Barrett can’t name the five freedoms in the first amendment, has kind of heard of that climate change thing, and won’t answer whether or not voter intimidation is illegal. This is pure insanity.

Amy Coney Barrett could not name the 5 freedoms guaranteed in the 1st Amendment.

That should disqualify her immediately.

Literally - she says she loves the Constitution, but doesn’t know the 5 freedoms guaranteed by the 1st Amendment?

What are the 5 freedoms of the 1st Amendment?”

That's like a basketball player not knowing what a ball is.

I’m literally sick to my stomach. Maybe she should’ve written some damn notes.

During Wednesday’s confirmation hearing, Barrett admitted she “did have a glass of wine” Tuesday night. “I will tell you that I needed that at the end of the day,” she said with a laugh.

"Let me just say on that kind of point you have a right to remain silent," said Sen. Richard Blumenthal (D-CT), evoking laughter from the nominee and the others in the hearing.

Some netizens felt as if Barrett should have put a cork in it, especially after she appeared to misspeak, vowing to “approach every case with an open wine - open mind.”

"I will approach every case with a open wine"
Kavanaugh is gonna love having her around pic.twitter.com/Lugc7qoe5H

Others, however, appeared to be in agreement with Barrett.

I will also approach every case with open wine, tbh. https://t.co/RnOT46tse3

Amy Coney Barrett will approach every case with an open wine https://t.co/5eqtzfNDG4 via @YouTube

ACB promises to approach cases with “an open wine”https://t.co/sNAzQx29PS

The fourth day of Barrett’s confirmation hearing is scheduled to begin Thursday at 9:00 a.m. local time.