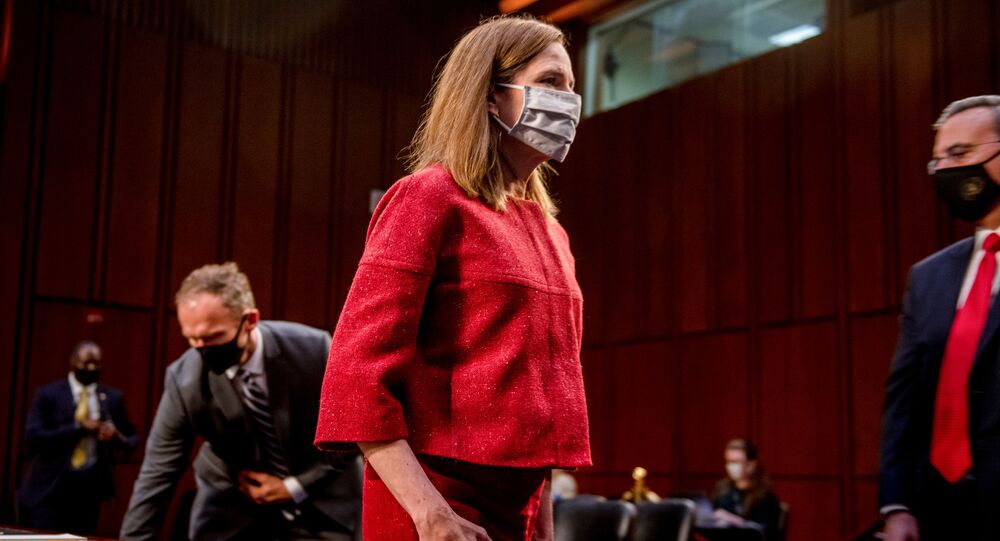 The US Democratic Party has raked in $35 million in donations during the first three days of the Supreme Court appointment hearings for Amy Coney Barrett.

With the Republican Senate majority set to confirm Barrett's nomination, Democratic senators have used the hearings to accuse President Donald Trump's administration of planning to use the resulting 6-3 majority of conservatives on the Supreme Court to abolish Obamacare, gay marriage and abortion.

Democratic candidate Joe Biden's campaign took the first day of the hearings as an opportunity for a fundraising drive, with Trump's nomination of Barrett dominating emails to supporters.

“This nomination is the Republicans’ latest attempt to tilt the scales of the court against the Affordable Care Act, even in the wake of a pandemic when folks need coverage the most,” one email read.

© AFP 2020 / ANNA MONEYMAKER
'How Low Can the Left Go?' Fury as Senator Asks Amy Barrett if She's Ever Sexually Assaulted Anyone
Democrat fundraising website ActBlue took $6 million on Monday, the first day of the hearings, $20 million on the second day and approached $10 million on Wednesday.

But that figure is just over half what ActBlue scooped up during the 2018 hearings for Brett Kavanaugh, during which Professor Christine Blasey Ford alleged the judge had sexually assaulted her at a party in 1982 when they were both teenagers.

Biden has refused to say whether or not he will pack the Supreme Court with extra members above the traditional nine if elected in order to engineer a liberal majority.

2016 Democratic candidate Hillary Clinton spent more than $565 million of a reported $1 billion raised for her election campaign, compared to $322 million spent by winner Trump from $600 million raised by the Republicans - including $66 million of the property tycoon's own money.