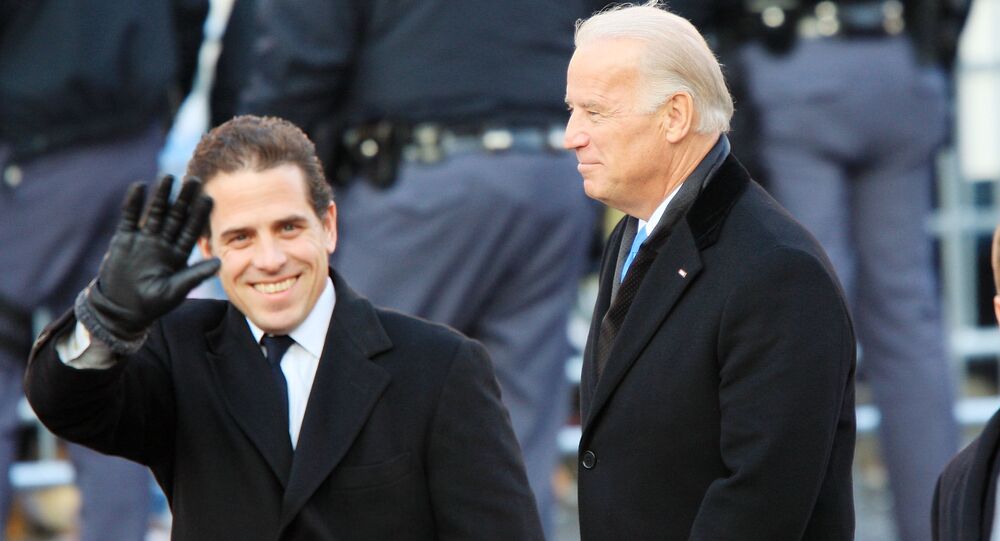 Last year, US President Donald Trump raised the issue of a possible conflict of interest over Hunter Biden taking an official position in the Ukrainian company, as his dad handled the Obama administration's policy towards the new Kiev authorities in his role as vice president. Joe Biden, however, denies that there was any such conflict of interest.

Son of the Democratic presidential candidate, Hunter Biden organised a never-before-mentioned meeting in 2015 between his dad, then vice president in the Obama administration, and his colleague from the Ukrainian gas firm Burisma, Vadym Pozharskyi, an adviser to the company's board, the New York Post reported citing findings made on a laptop purportedly linked to the Biden family. The laptop, labelled with a Beau Biden Foundation sticker, was dropped off for repairs and data restoration in the state of Delaware by an unidentified person in April 2019, but was never collected. The repairs shop owner said the computer was seized by the FBI in December 2019, but not before he was able to make a copy of its contents and send it to former Mayor Rudy Giuliani, who, in turn, provided them to the NYP.

The computer contained documents purportedly from Hunter Biden's time on Burisma's board, as well as some personal materials, including Hunter's photos with the family. Sputnik could not independently verify the authenticity of these files, nor the repairs shop owners claims about the FBI getting hold of the computer.

Among the alleged Burisma files on the laptop, one email stood out, purportedly sent by board adviser Pozharskyi to Hunter Biden. The email features a post-scriptum indicating it had been sent from an iPhone in Russian, a language sometimes used by Ukrainians alongside their native one. In the alleged email, Pozharskyi thanked Hunter for organising a meeting with his father at some point before 17 April 2015.

"Dear Hunter, thank you for inviting me to DC and giving an opportunity to meet your father and spent [sic] some time together. It’s realty [sic] an honor and pleasure", the alleged email reads.

The email puts earlier statements by Joe Biden, in which he claims to have never been involved in his son's "overseas business dealings", into question. In addition, prior to the alleged meeting with Joe Biden, Pozharskyi wondered in a May 2014 email if Hunter Biden could "use [his] influence" in order to help the company fend off attempts by members of the new Ukrainian authorities to blackmail Burisma for money.

"I have never spoken to my son about his overseas business dealings." pic.twitter.com/q62Fx8Pf4y

The alleged email, marked as an "urgent issue" in the subject, had been sent less than a year before Hunter purportedly acquainted Pozharskyi with his father. In the initial response, Hunter Biden purportedly wondered whether the Ukrainian authorities had pressed any formal charges against the gas company and who in the government could put an end to the attacks on Burisma. Almost a year after the alleged never-reported meeting with Pozharskyi, Joe Biden intervened in Ukraine's politics in relation to Burisma, sparking conflict of interest concerns years later.

Biden Got 'Son of a B**ch' Prosecutor General Fired

Hunter's admission to the board of Ukraine's largest gas extracting company in April 2014 at the time when his dad, then US vice president, led Washington's policy towards Kiev already raised some eyebrows. Back then, Biden's office shrugged off concerns by stating that Hunter Biden was a private citizen not representing the US government or its views.

The issue was raised again years later after Ukraine's then-Prosecutor General Viktor Shokin started an investigation into Burisma over alleged money laundering and tax evasion that its owner, Mykola Zlochevsky, had allegedly engaged in. Shokin claimed that the entire company, including the board Hunter Biden was on, would be scrutinised, but the probe never happened.

Shokin had long been criticised by American and European politicians alike for not doing enough to root out corruption in the new Ukrainian government, and in 2016, then-US Vice President Joe Biden persuaded Kiev to sack its prosecutor general, although Biden himself denies pressuring the country's authorities. Biden later revealed at the Council on Foreign Relations in 2018 that he made the Ukrainian authorities fire Shokin by threatening to withhold a $1 billion US loan crucial for keeping the Ukrainian economy afloat in the aftermath of the 2014 government overthrow.

The dubious nature of Joe Biden's role in Shokin's firing and how it could have helped his son Hunter was raised once again by US President Donald Trump in 2019, as he tried to get the probe into the affair going in the Ukrainian justice system. His attempts were revealed in the anonymous testimony of a whistleblower, who alleged that POTUS abused his power to force Kiev to open the probe into Joe Biden's actions in 2016 by withholding military aid to Ukraine.

© AP Photo / Charles Dharapak
GOP Senators Issue Report Alleging Impact of Hunter Biden's Ukraine Ties on US Policy 'Unclear'
The allegation was strongly denied by both the US and Ukrainian presidents, with the White House releasing recordings of their conversations. However, the Democratic Party used the whistleblower report as a pretext to initiate the impeachment process against POTUS, accusing him of abuse of power. Despite successfully "impeaching" Trump in the "blue" House, Democrats failed to remove him from office, as the GOP-controlled Senate court dismissed the accusations against the president. At the same time, Democrats made no attempt to investigate the actions of their would-be presidential candidate, who once again insisted that he was not involved in his son's business affairs.
...
Reddit
Google+
Blogger
Pinterest
StumbleUpon
Telegram
WhatsApp
116