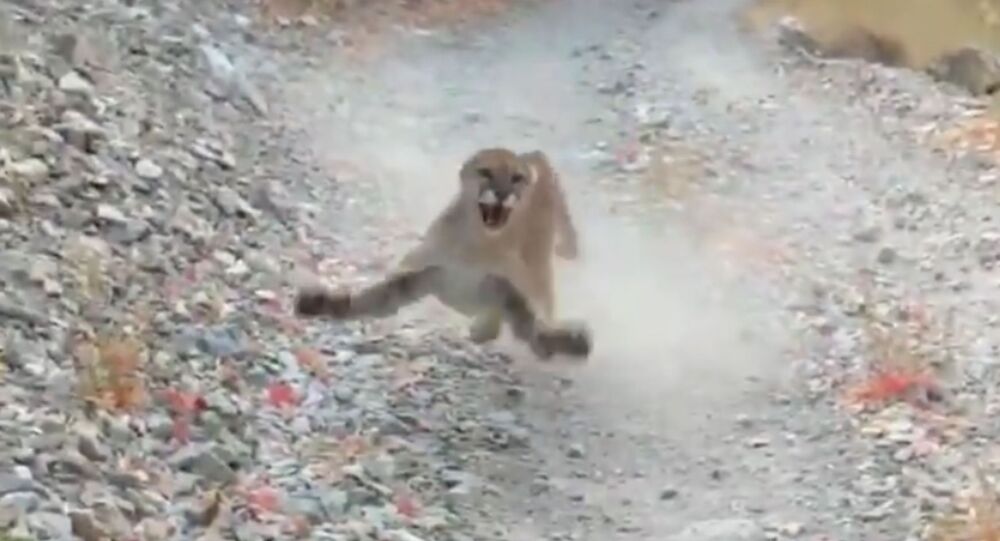 A Utah man recently survived a terrifying encounter with a mother mountain lion while jogging along a park trail.

On Saturday, Kyle Burgess, 26, accidentally came across mountain lion cubs in Slate Canyon while jogging along a trail. Before he knew it, the mother cougar began approaching him, and the encounter quickly escalated to her chasing and charging at him.

Burgess recorded the six-minute incident with the cougar. During the nerve-wracking, expletive-filled clip, Burgess makes loud noises, roars and walks away slowly in order to avoid the massive feline, which follows him while staying at a distance.

“No, no, go away, please go away,” Burgess says as he backs away from the cougar. “Come on, dude, I don’t feel like dying today,” he adds, as the cat keeps steadily approaching.

In the video, the cougar is seen and heard hissing and charging the lone trail runner in a bid to scare him off.

“This is scary. My heart is racing. Dude, OK. This is not fun,” Burgess says on the video as the cougar growls. “Go away! Go away! Go back to your babies!”

In an interview with KSL Newsradio, Burgess said he has been trail-running for years and has plenty of experience on the Slate Canyon Trail. While he has seen bobcats, he told the outlet, “This is the first time I have ever encountered a mountain lion.”

He said that he didn’t think that animal followed him out of hunger, but rather because of a desire to protect her young.

“Right as I knew what she was, a cougar coming up on me, I decided I needed to get away from her babies.”

Although Burgess has never had any formal training on such situations, he had done online research on keeping safe on the trails and spoken with hunters about what to do if he came across a dangerous animal.

“Don’t run away. Be the bigger thing that’s out there,” he said they told him.

During his six-minute ordeal with the mother cougar, Burgess made himself look big, never turned his back, made loud noises and eventually tossed a rock at the animal, after which she fled.