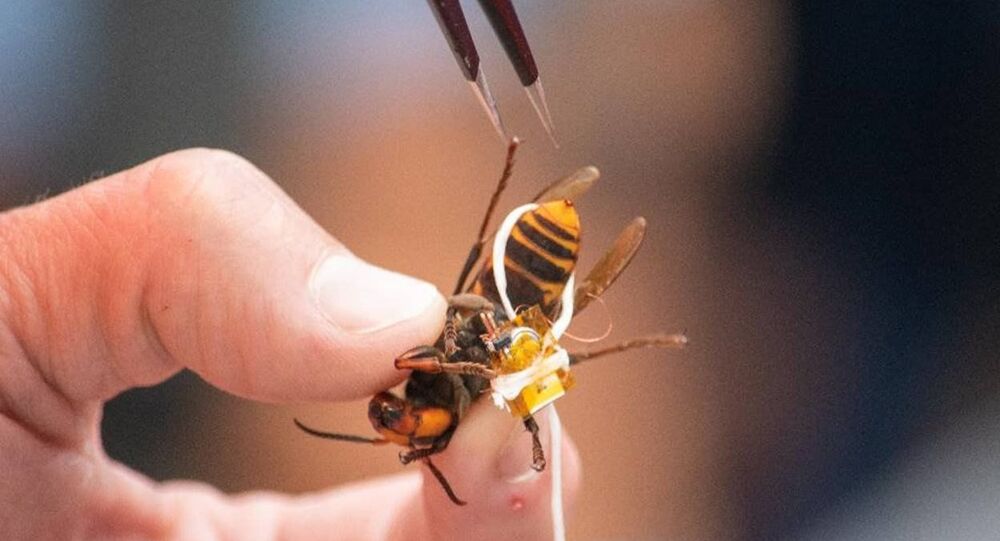 Scientists in the state of Washington have announced that they were again unsuccessful in live-tracking an Asian giant hornet - or "murder hornet” - to locate and destroy its nest and quell the species’ spread in the US.

Washington State Department of Agriculture (WSDA) officials held a virtual news conference on Monday to discuss their tracking of an Asian giant hornet and answer questions about their efforts.

State scientists revealed that an entomologist had attempted to use dental floss to tie a tracking device to a female “murder hornet” previously captured on October 5. Unfortunately, the tracker’s signal was lost shortly after the insect traveled through a collection of blackberry bushes.

Responding to an inquiry issued by a Whatcom County resident, WSDA entomologist Sven Spichiger explained that “there’s definitely at least two nests” in the county, which has yielded a number of specimens for the state.

A total of 18 Asian giant hornets have been captured across Washington since late last year, according to officials.

Earlier this month, the WSDA attempted to locate an Asian giant hornet nest by gluing a radio tag to another captured “murder hornet.”

"Gluing tracking tags is usually done on honeybees, bumble bees, things like that and some other insects. One of the neat things about hornets is they’re not quite as hairy as those, so there’s not much for the glue to grab onto,” Spichiger said at the time, as reported by KING-TV.

“So you do have to be very patient and wait till it dries, but when you’re handling an Asian giant hornet, obviously it doesn’t want you handling it, so you have to keep it chilled down."

Unfortunately, between the drying time, cooling from an icebox and the insect’s own movements, the glue was unable to completely bond to the Asian giant hornet before making contact with its wings, ultimately resulting in the “murder hornet” being unable to fly.

News of this failure comes several weeks after state officials revealed that, in the 1,400 traps set across the state, only a single Asian giant hornet had been captured.

Scientists have been racing against time, as colonies of the species tend to show more development in the months of August and September. Officials hope to be able to track down and destroy the colonies before they can spread and enter the “slaughter phase,” in which a colony of Asian giant hornets can usurp a honeybee hive and make quick work of some 30,000 of the hive’s previous occupants via decapitation, according to the WSDA and National Geographic.