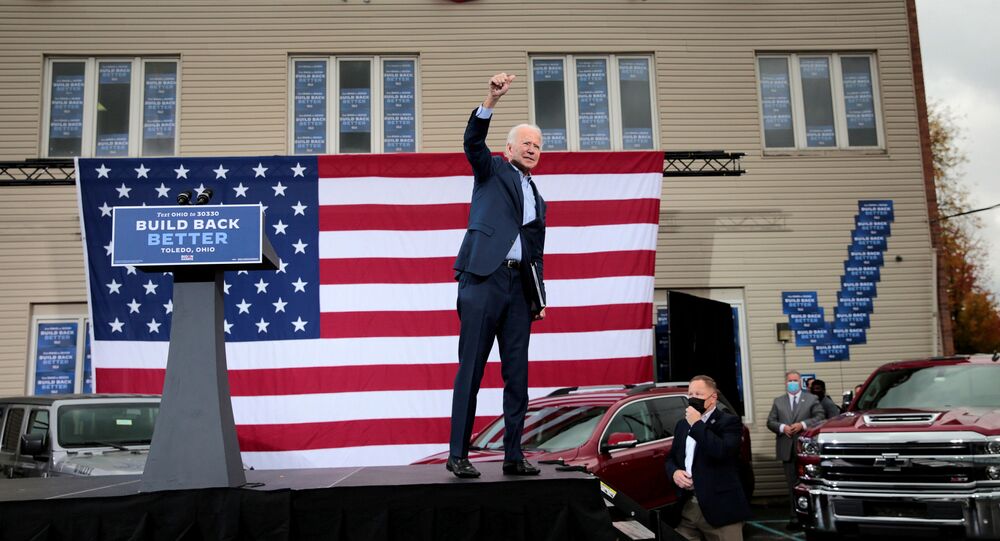 WASHINGTON (Sputnik) - US President Donald Trump once again mocked Democratic presidential candidate Joe Biden, telling thousands of people at the campaign rally in Sanford, Florida, that the Democrats will turn America into a "socialist nightmare".

Trump told his Florida supporters on Monday that he was in great shape and feeling energised, which was not the case with Biden.

"Sleepy Joe Biden, not a nice guy by the way, I have to be honest, … he had a very bad day today, … he forgot Mitt Romney's name, he didn't know what state he was in and he said today he is a proud Democrat running for the US Senate, it's the second time", Trump said at the first campaign rally he held since announcing his COVID-19 diagnosis.

Sleepy Joe Biden had a particularly bad day today. He couldn’t remember the name of Mitt Romney, said again he was running for the U.S. Senate, and forgot what State he was in. If I did any of this, it would be disqualifying. With him, he’s just Sleepy Joe!

Trump said that Biden was "owned by the radical globalists" who have shipped away US jobs and shut down US factories, forcing the US to engage in "endless wars".

On Monday, Biden apparently could not recollect the name of ex-Massachusetts governor Mitt Romney, who ran against former President Barack Obama in 2012. Biden referred to him as "a Mormon, the governor".

Later, at a campaign event in Toledo, the former vice president failed to define the post he is actually running for in this election. It was not clear if that was misspoken or he was just daydreaming, but in February, he made a similar mistake at a Democratic event in South Carolina saying that he is Democratic candidate for the United State's Senate.

Joe Biden: “I’m running as a proud Democrat for the Senate”https://t.co/hsTHCunJzQ pic.twitter.com/H96lX0qTWS

Earlier this month, Trump pulled out of the proposed second scheduled debate with Biden. The US president announced his decision after the Commission on Presidential Debates (CPD) announced the debate would be virtual in order to eliminate any risk of contracting the novel coronavirus.

Trump tested positive for COVID-19 at the start of October and was hospitalized at the Walter Reed Military Medical Center. Ahead of the Monday campaign rally in Florida, White House Physician Dr Sean Conley said that Trump had tested negative for the coronavirus "on consecutive days" and was not infectious to others.