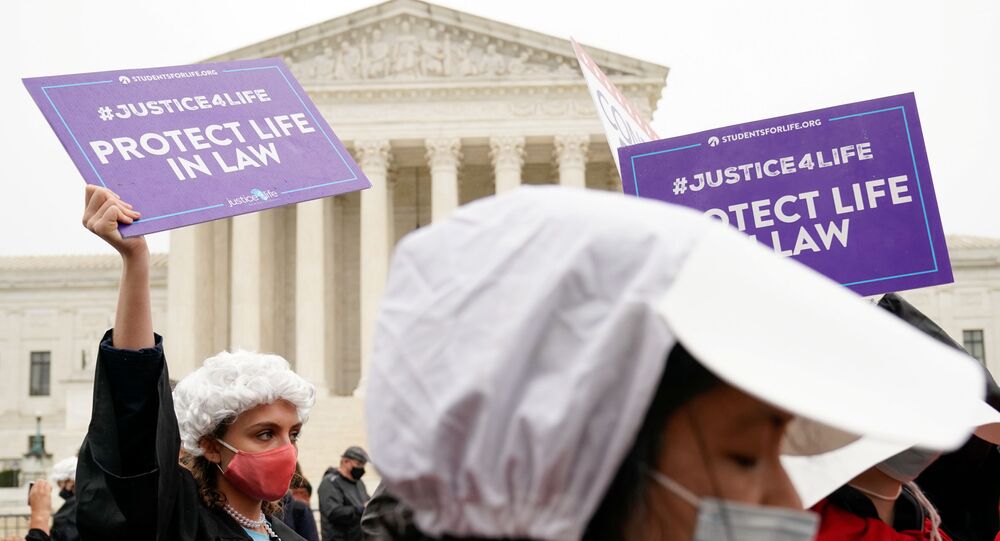 Over 20 Arrested During Demonstrations Held Amid Barrett's Confirmation Hearings - Reports

Protesters gathered outside the Dirksen Senate Office Building on Monday, the first day of Barrett's hearings. US Capitol Police arrested 21 demonstrators for crowding and obstruction, while another person was arrested for unlawful conduct, Fox News said.

Happening now: Protesters opposed to the confirmation of conservative Judge Amy Coney Barrett are being arrested outside the Dirksen Senate Building as Barrett’s confirmation gets underway. About two dozen seem poised to be arrested by Capital Police. #SCOTUS #DCProtests pic.twitter.com/hKLv5g5qEx

Earlier, it was reported that costumed demonstrations were held outside the US Supreme Court in Washington ahead of the Senate judiciary committee's confirmation hearings of Barrett, who is Trump's nominee to replace late Justice Ruth Bader Ginsburg.

According to footage on social media, opponents of Barrett's nomination put on red robes and white-winged bonnets in reference to "The Handmaid's Tale," a dystopia about a theocratic state in which the role of women is limited to giving birth to children and serving.

Anti-Barrett protesters have created a perimeter around a riser, where they are attempting to have a rally, by holding yellow caution tape stamped with the hashtag #reclaimthecourt. Meanwhile, conservative students try to drown them out, chanting “we have the votes!” #dcprotest pic.twitter.com/hbjnhatupL

Liberal groups are concerned that the conservatism of Barrett, a Catholic mother of seven, could put women's right to abortion at risk.

Supporters of Barrett, too, gathered near the court building. Many of them wore white wigs and black judicial robes and held "pro-life" banners, the C-Span channel reported.

Trump wants Barrett to be confirmed as soon as possible, before the presidential and congressional elections on November 3 when Democrats hope they will retake control of the Senate from the Republicans. Trump's rival, former vice president Joe Biden, has repeatedly stressed that Trump's nominee should not be confirmed before the elections.

The Supreme Court may have to decide the 3 November election outcome amid fears of voter fraud due to mail-in ballots.