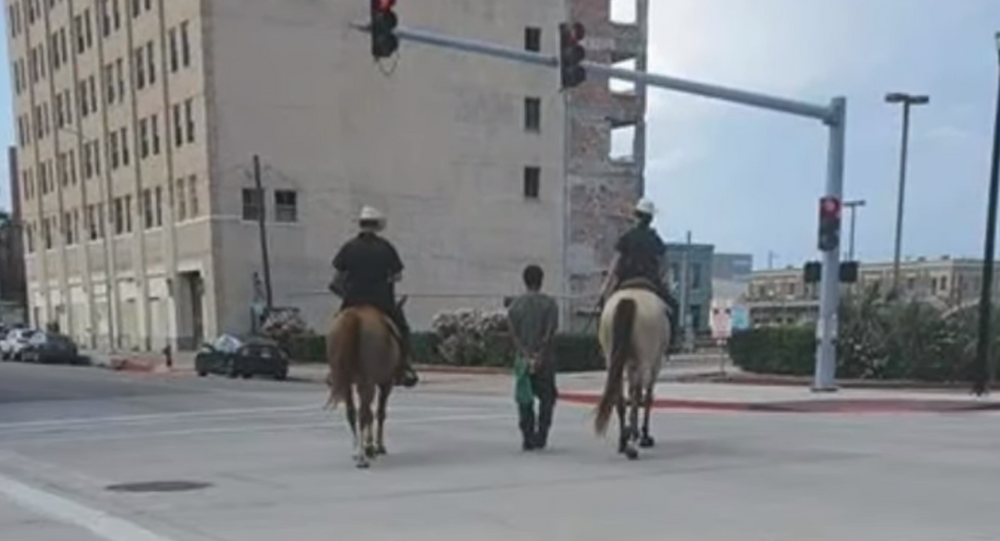 In August 2019, images showing two white horse-mounted police officers escorting a handcuffed African-American man down a roadway with a length of rope in Galveston, Texas, triggered national outrage and condemnation on social media. A probe was launched into the incident at the time that concluded the officers “had not violated the law.”

Donald Neely, a Black-American man in Texas, who was photographed in 2019 leashed and handcuffed as two white horse-mounted police officers walked him down streets, has filed a lawsuit against the city of Galveston and its police department, seeking a $1-million compensation over the “offensive” incident that has been compared to “slavery”, the Houston Chronicle reported.

“[The two officers] knew or should have believed that Neely -- being a Black man -- being led with a rope and by mounted officers down a city street as though he was a slave, would find this contact offensive,” argued Neely’s attorney, Julie Ketterman, in the lawsuit filed in Galveston County court. “Neely felt as though he was put on display as slaves once were”.

While seeking compensation for emotional distress, malicious prosecution and negligence for her client, the attorney said in court filings that the client “suffered from fear because one of the horses was acting dangerously, putting Neely in fear of being drug down the street by a run-away horse,” according to KPRC.

Neely, 44, was arrested by mounted officers on 3 August 2019 for criminal trespassing, according to the Galveston Police Department. A “line was clipped to the man’s handcuffs” as the officers walked him to an area from which the mounted police could transfer him to a police vehicle. Photos of the incident outrage many and were condemned as being reminiscent of “slavery”.

We have verified with law enforcement officials in Galveston, that the photograph taken in Galveston is real. It is hard to understand why these officers felt this young man required a leash, as he was handcuffed and walking between two mounted officers. pic.twitter.com/bEFZnn4qmH

The police department apologized at the time and claimed that the officers led the suspect to their staging point, as a transport unit was reported to have not been immediately available at the time of the arrest. However, the police acknowledged that the “trained technique” caused an “unnecessary embarrassment” for the Black detainee, but insisted the officers “did not have any malicious intent.

Footage from two officer body cameras was released in the months following the incident. The officers were identified as Patrick Brosch and Amanda Smith.

“This is gonna look really bad,” one officer says in the video. “I'm glad you're not embarrassed, Mr. Neely.”

Neely was homeless and mentally ill at the time of the arrest, according to the Houston Chronicle.

The suspect, who later moved in with his sister and received medical help, said that he “felt embarrassed” after video and photos of him being leashed and walked by white police officers went viral and were viewed by millions of people across the world.

“It came back and hurt me because I did not know I was getting video recorded by the public,” Neely said in a statement to the Houston Chronicle.