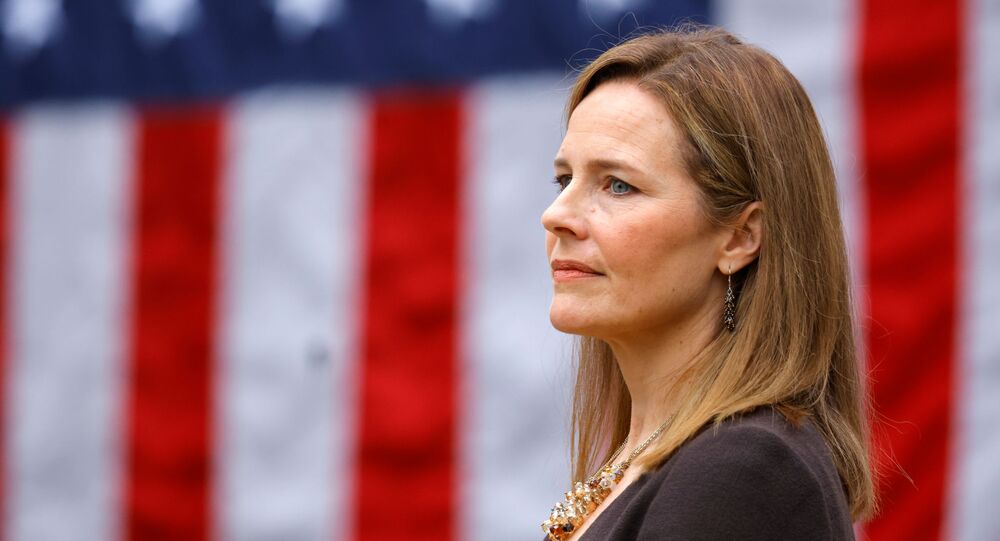 Supreme Court nominee Amy Coney Barrett should recuse herself in any cases linked to the outcome of the November 3 presidential election as well as a challenge to the Obamacare health law, US Senate Democratic leader Chuck Schumer said on Sunday.

According to Schumer, Barrett should step aside in any cases involving the presidential election because of Trump's earlier statements about his expectations that the court would rule in his favour if Barrett's nomination was confirmed.

Schumer's statement comes a day before Barrett will be facing her Senate confirmation hearing. The 48-year-old attorney will deliver her opening statement to the Republican Judiciary Committee and will face questions from senators on Tuesday and Wednesday before the hearing will be concluded on Thursday.

© REUTERS / CARLOS BARRIA
U.S. Court of Appeals for the Seventh Circuit Judge Amy Coney Barrett reacts as U.S President Donald Trump holds an event to announce her as his nominee to fill the Supreme Court seat left vacant by the death of Justice Ruth Bader Ginsburg, who died on September 18, at the White House in Washington, U.S., September 26, 2020

Last month, President Trump nominated Amy Coney Barrett for the vacancy on the Supreme Court to succeed late Justice Ruth Bader Ginsburg. The move was criticised by Democratic presidential hopeful Joe Biden, who also urged the Senate not to confirm any Supreme Court candidate until after the 3 November election.

According to a Morning Consult/Politico poll conducted in late September, 37 percent of respondents believed the Senate should vote to confirm Barrett to fill Ginsburg’s seat, while 34 percent felt the opposite. The poll showed that at least 40 percent of respondents said that the Senate should only vote on confirming Barrett if Trump wins in November presidential election, while 39 percent said the vote should take place as soon as possible, regardless of the possible election results.