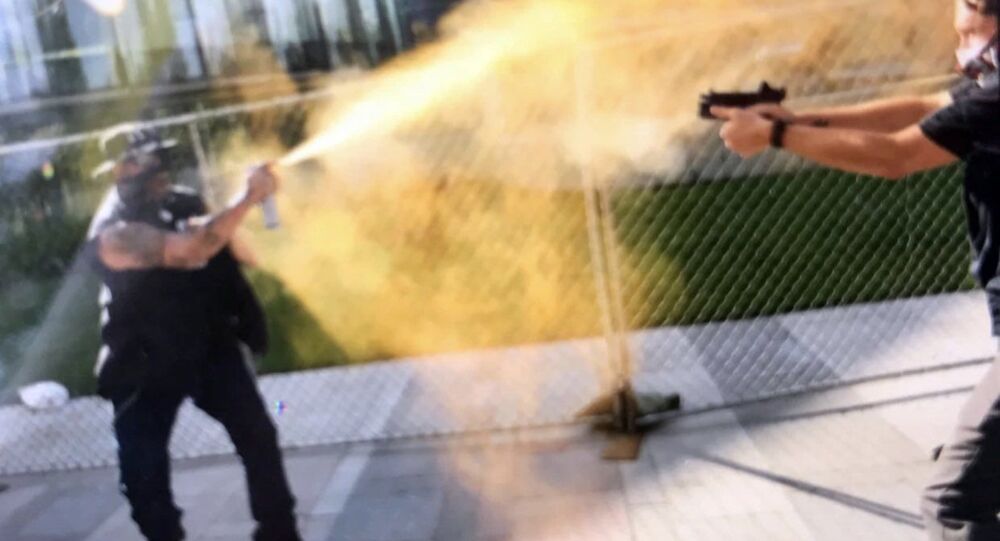 On Saturday afternoon, the US city of Denver, Colorado, witnessed two opposing rallies at the same time at the city’s Civic Center Park – one pro-police and the other anti-police. Police had a large presence in the area to prevent potential violence or clashes between the two groups.

A resident of Denver, Colorado, was killed on Saturday in the wake of a shooting that took place during two opposing rallies at the city’s Civic Center Park, one pro-police and one anti-police, the Denver Police Department said.

The two sides were reported by some to be right-wing pro-police “Patriot Rally” members and, on the other side, Black Lives Matter protesters.

“Officers are investigating a shooting that occurred in the Courtyard by the Art Museum. 1 victim transported to the hospital their condition is unknown,” the police department said.

ALERT : Officers are investigating a shooting that occurred in the Courtyard by the Art Museum. 1 victim transported to the hospital their condition is unknown, 1 suspect in custody . pic.twitter.com/1F6NuVlv0F

Police in their initial report that the shooter had been at the crime scene. He was identified as “a private security guard with no affiliation with Antifa”.

Later, police said that a second suspect had been detained in relation to the shooting and that the unnamed victim was later pronounced dead at the hospital.

Denver police said that it is now investigating the incident as a homicide.

Update: This shooting is now being investigated as a Homicide. Updates will be posted as information comes available.

ICYMI: Division Chief Montoya provides info near the scene today's homicide investigation. This remains an active investigation and any additional info will be shared to this thread as soon as it becomes available. #Denver https://t.co/Bj5aoMUapq

Footage of the deadly shooting was posted on social media. In the video, shooting can be heard before police forces, present at the scene at the time, rushed in the direction of the gun sound to find the victim lying on the ground covered with blood, while a shooter stood nearby.

The Denver Post reported that a private security guard had shot the victim after the latter sprayed mace at him and that the victim was part of the pro-police “Patriot Rally”.

A video of what happened prior to the shooting was also posted online. The masked victim appears in the video as another man tells him, “Go ahead and f**king mace me”. Seconds later, seemingly, the victim maced another person and then the guard shot him.

Important context: man in “Black Guns Matter” shirt urges conservatives to mace him. “F*ck around and find out,” he says. Another man shoots the victim off screen during the altercation. pic.twitter.com/hzPC1gmQvO

One Person Killed, One Injured in Shooting at Amazon Fulfillment Centre in US, Reports Suggest