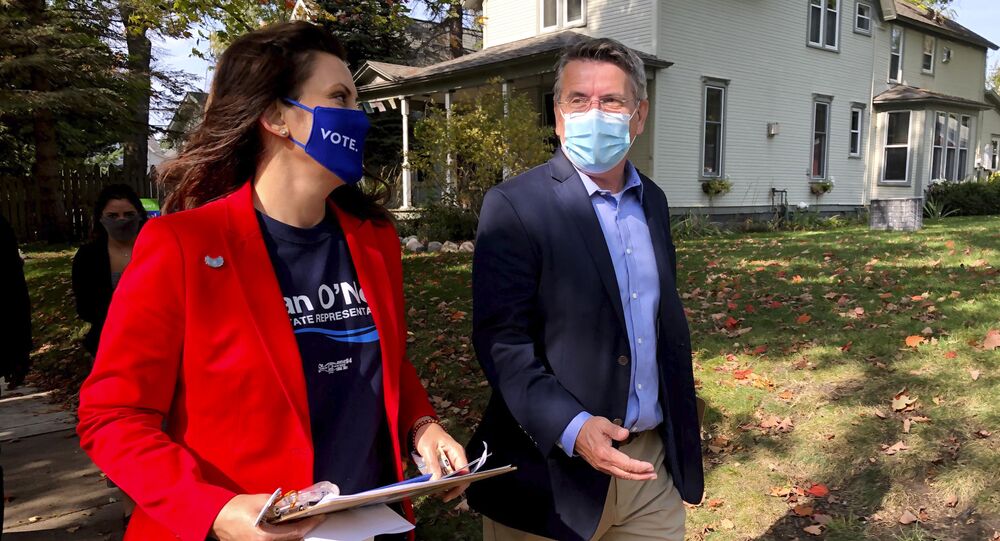 Earlier in the week, the Michigan attorney general, Dana Nessel, announced that several militia group members had been taken into custody on charges of domestic terrorism for what is described as a plot to kidnap the state's governor, Gretchen Whitmer.

A sheriff in Barry County, Michigan, named Dar Leaf, who took part in anti-lockdown protests with the militants who were taken into custody for allegedly participating in a plot to kidnap Governor Gretchen Whitmer, suggested during an interview earlier in the week that the men were only attempting to "arrest", not "kidnap" the governor.

Speaking to Fox 17 Michigan reporter Aaron Parseghian, Leaf theorized that the militants were attempting to "make a felony arrest". He did not appear to regret his personal association with those charged of the kidnapping attempt.

“It’s just a charge, and they say a 'plot to kidnap' and you got to remember that. Are they trying to kidnap? Because a lot of people are angry with the governor, and they want her arrested. So are they trying to arrest or was it a kidnap attempt? Because you can still in Michigan if it's a felony, make a felony arrest,” Leaf suggested.

The sheriff, who was revealed to have participated in rallies with those detained and charged with domestic terrorism, appealed to the presumption of innocence, commenting on the "plot" charges.

“The two gentlemen that I know of from my county, were they involved in that? I don’t know. They’re innocent till proven guilty. And we really, really should be careful, trying to try them in the media,” Leaf offered, referring to brothers Michael and William Null, who are among six people accused of participating in the domestic terror plot, and who had both earlier joined a rally with the sheriff during previous anti-lockdown protests.

Earlier in the week, Whitmer expressed her gratitude to law enforcement for thwarting the attempted kidnap. On 8 October, the FBI and the Michigan attorney general announced that thirteen people - among them members of a so-called Wolverine Watchmen militia group - had been taken into custody, suspected of being involved in the terror plot.

Leaf, along with the two arrested Null brothers, was among those protesting strict coronavirus-related measures earlier imposed by Whitmer in Michigan. Particularly, the governor had prohibited any gathering of over 50 people and introduced mandatory face masks indoors while extending the state of emergency until 27 October.

Commenting on the arrests, Whitmer expressed hope that they would lead to convictions.