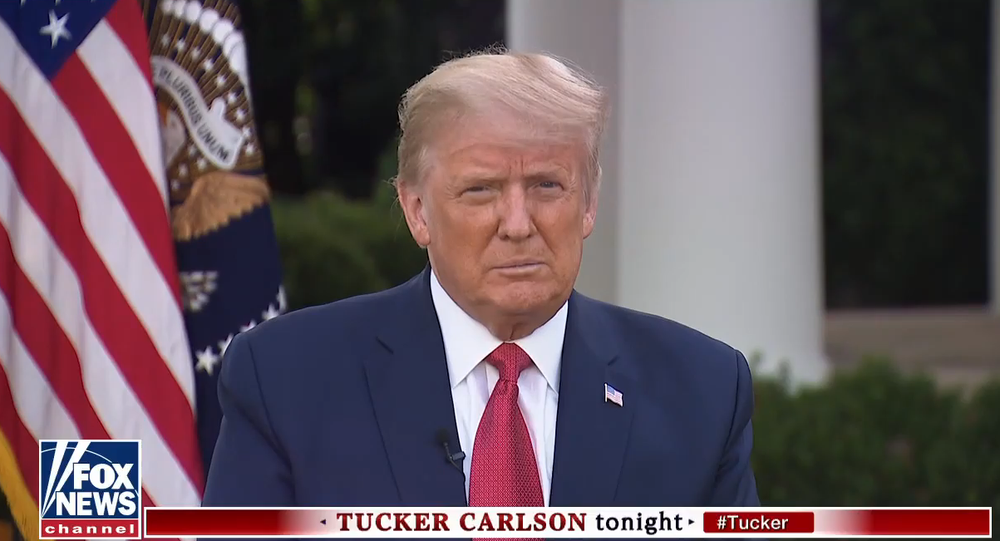 US President Donald Trump last week announced that he and his wife had tested positive for the coronavirus. After spending four days at the Walter Reed Hospital before returning to the White House, Trump says he feels "great" and expressed his readiness to get back to holding public campaign events.

In a first televised interview since being diagnosed with COVID-19 last week, US President Donald Trump offered details about his treatment and ongoing recovery process with Fox News contributor Dr. Mark Siegel, speaking to him from the Rose Garden on Friday.

In what the president described as a "medical examination", Trump said that he is now medication-free and revealed that he feels "really, really strong", while also detailing his first days in combating COVID-19.

Trump detailed actions taken when he arrived to hospital, and described tests he underwent.

"They tested the lungs,” Trump said. "They have incredible equipment at Walter Reed. In fact they said, ‘No, you can leave your jacket on.’ I said, ‘I’ll take it off anyway, if you want.’"

Crediting early action for what appears to be a recovery, Trump praised the Walter Reed hospital's equipment and doctors, along with touting an experimental antibody cocktail he received while in the facility. He also revealed that he tried to "negotiate" with the doctors over his treatment, but ended up listening to what they had to say.

"They wanted to keep me for observation," Trump continued. "You know, they wanted to be sure it was good. But [...] I was there for, I guess, three-and-a-half days [...] I wanted to leave after the first day. I really felt I was in not bad shape. After the first day, I think I would have been in much worse shape had I not taken this [Regeneron] medication."

Praising the medication and noting that it is "apparently good to be president", Trump reiterated his promise to supply anyone infected with COVID the same treatment that he received. The US president outlined that he would "love to" donate plasma if he is asked to do so.

Eager to resume his campaign and public speaking events, Trump will appear on Saturday, according to the White House schedule. He also claimed that he was ready to participate in a second presidential debate, originally scheduled for 15 October, but, upon learning that it would be held in a virtual format, he refused to participate, claiming that he would not "waste his time" debating online.

Trump's next scheduled meeting with Democratic presidential rival, Joe Biden, is tentatively scheduled for 22 October, and it is still unclear whether a third presidential debate will occur. The Biden team rejected the 29 October date proposed by the Trump campaign, noting that the decision to change scheduling is solely up to the Commission on Presidential Debates.