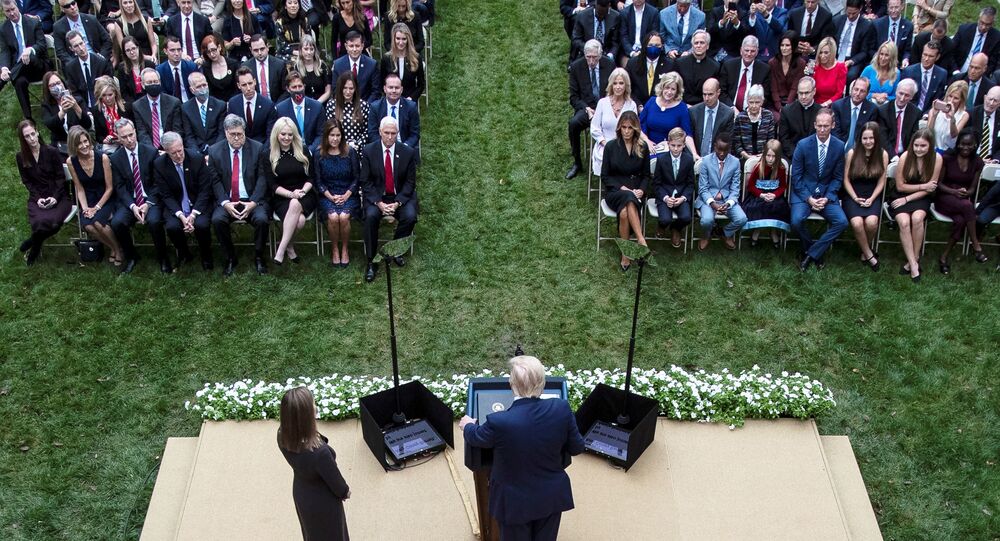 On 2 October, US President Donald Trump announced that just a few days following a White House event where the president revealed his Supreme Court nominee, he and the first lady, Melania Trump, had contracted the coronavirus disease. At least 37 White House staffers and “other contacts” have reportedly tested positive for COVID-19.

US top health expert and director of the National Institute of Allergy and Infectious Diseases (NIAID), Dr. Anthony Fauci, said on Friday that the 26 September event at the White House Rose Garden, in which President Donald Trump announced Judge Amy Coney Barrett as his nominee for the US Supreme Court vacancy, was a “superspreader” event for the COVID-19 coronavirus pandemic.

Over the course of the interview, Fauci stressed the importance of wearing masks amid the virus pandemic in order to avoid infection.

“We've found out a couple of other things that made it compelling to recommend strongly that everyone wear a mask,” Fauci said. “We found out that about 40 to 45 percent of all infected people did not have symptoms. So, you do not know that they are infected. And we found out that those people are a substantial part of the people that actually transmit infections to other people.”

Last week, Trump and his wife Melania tested positive for COVID-19. The 74-year-old president was hospitalized for three days at the Walter Reed Medical Center before returning to the White House on Monday.

Trump’s infection was followed by a COVID-19 outbreak inside the White House, in which at least 37 staffers were shown to have contracted the novel disease, according to data collected by Peter James Walker and published on Tableau Public.

Trump suggested in an interview with Fox Business that he could have contracted COVID-19 during a recent meeting with the families of soldiers who were killed while serving in the US military, suggesting that he could not ask them to keep their distance from his person.

However, White House spokesperson Alyssa Farah told reporters on Thursday she does not personally think Trump became infected during the 27 September meeting with military families.

“Based on contact tracing, the data we have, we don't think it arose from that event,” Farah said.

On 26 September, Trump nominated Barrett to fill a vacancy in the Supreme Court opened following the death of Justice Ruth Bader Ginsburg on 18 September.

As of Friday, the United States has registered over 7.6 million coronavirus-related infection cases, along with 213,390 deaths, according to data collated by the Johns Hopkins University.