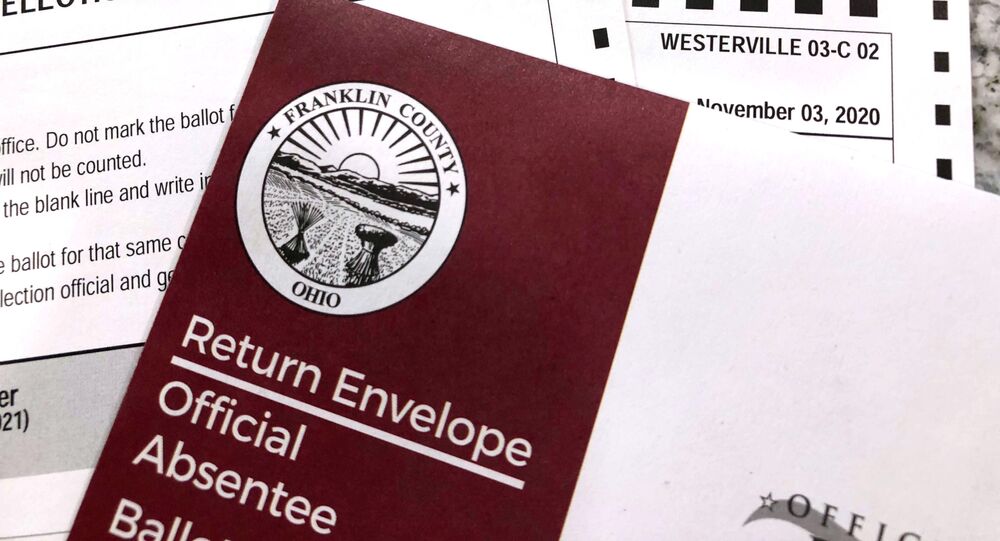 Voting by mail in the US has sparked heated debate between Democrats and the GOP in advance of the approaching presidential election, as the Dems tout mail-in balloting as a safe way to vote amid a deadly pandemic, and the latter slam it for paving the way to election fraud.

Residents of Ohio's Franklin county received some 50,000 wrong mail ballots ahead of the upcoming presidential election, a local election board said on Friday.

Reacting to the incident, US President Donald Trump tweeted that the upcoming presidential election was "rigged!!!" on Friday, adding that it is "out of control".

"Breaking News: 50,000 OHIO VOTERS getting WRONG ABSENTEE BALLOTS. Out of control. A Rigged Election!!!", the US president tweeted.

Franklin county officials responded to the Trump criticism, admitting that a "serious mistake" was made, but quickly assuring that measures had been taken to correct the error.

"Mr. President, it certainly was a serious mistake, but a serious mistake that we’re working hard to make right. Our board is bipartisan and our elections are fair. And every vote will be counted", the Franklin country board of election tweeted in response to Trump's angry tweet.

​The board also promised to send a replacement for every invalid ballot.

"We can now confirm that 49,669 voters received an incorrect ballot. Those voters will be contacted directly by the Franklin County Board of Elections and a replacement ballot will be mailed to them", the election board tweeted on Friday.

County Elections Director Ed Leonard stressed that no votes would be counted twice, after accurate ballots are received by voters, while Ohio Secretary of State Frank LaRose's office ordered the board to roll out an explanation letter detailing the mistake.

According to The Columbus Dispatch, Franklin County has already sent 237,498 absentee ballots to voters who requested them in the first wave of record pandemic-prompted mail-in balloting. It turns out that over one of every five mailed absentee ballots was wrong.

As all the wrong ballots are said to be replaced soon, extra controls have reportedly been imposed to prevent the mistake from occurring again.

Political squabbles unfolded around the idea of a massive mail-in ballot during the upcoming November presidential election, with Democrats encouraging the practice as a safe way to vote amid the pandemic while the Republicans, led by the president, oppose voting by mail, believing that it could lead to election fraud.

Since the beginning of early voting, the United States has seen several incidents of local mail-in ballotting problems, prompting additional condemnation from Republicans.

In Michigan, the local GOP office said that they had found a ballot box that could easily be opened and was containing one ballot inside, claiming that the integrity of the widely-used ballot boxes could not be guaranteed. The New York City Board of Elections has also received criticism over several errors in mail ballots - incorrect names, addresses and military affiliation where there was none. Swing state Pennsylvania also saw some discarded mail ballots with votes for Trump, sparking concerns at the Department of Justice.