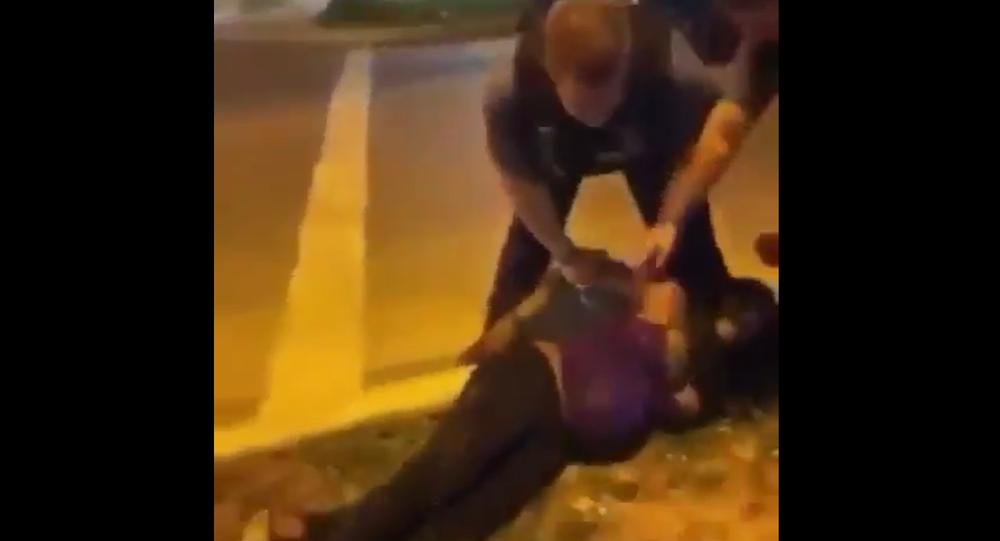 Activists in Kansas City, Missouri, are calling for the firing of the local police chief and a 50% budget cut to the department following the recent viral and brutal arrest of an expecting mother.

Deja Stallings, who is nine months pregnant, broke her silence during a news conference Thursday, a week after she was arrested and manhandled by officers with the Kansas City Police Department (KCPD).

“KCPD wants you to believe that they are the victim, but they are not,” the 25-year-old told the crowd. “I am a traumatized pregnant woman. I am not a threat. Now I can barely walk. I cry every day because I am scared for my baby.”

Activists and civil rights group members also spoke at the October 8 news conference, calling attention to the actions of the KCPD, which were caught on camera by various bystanders.

In one widely-circulated clip, arresting officers are overheard threatening to arrest bystanders unless they back up from the pregnant woman.

White Kansas City Cop "Kneeling" On The Back Of Black Pregnant Woman pic.twitter.com/KS14c1jBGx

Additional footage captured from the September 30 scene shows an officer forcing Stallings onto her stomach before shoving his knee into her lower back and handcuffing the expecting mother.

The officer then fails to lift Stallings onto her feet, only managing to turn her over.

@NBCNews @CNN @TheRevAl here is a police officer in Kansas City with the knee on the back of a pregnant mother due 10/9. She is almost due. pic.twitter.com/l0pRwy8t7L

“My baby girl has not even been born, but she is a victim of police brutality. I am trying to stay strong,” Stallings concluded on Thursday.

The KCPD cop in question has not been reprimanded or suspended from the force. Furthermore, authorities have maintained that Stallings, booked on a charge of hindering police duties, interfered with officers’ arrest of an unnamed man.

“So we are not naming that officer,” said KCPD spokesperson Sgt. Jacob Becchina on Thursday, as reported by Fox 4. “The officer is currently on duty. On full duty. There is no restrictions or anything like that.”

Becchina said that an internal probe has been launched into the incident by Jackson County Prosecutor Jean Peters Baker’s office to determine whether the officers on the scene violated policy or did not follow procedure.

It’s worth noting that without eyewitness footage, the investigation would be left with only surveillance video and dashboard camera footage from police cruisers. KCPD officers will not be equipped with body cameras until the end of 2020, the department projects.

Since Stallings’ arrest last Wednesday, local activists have assembled and demanded the city fire KCPD Chief Rick Smith and the arresting officer in question. They have also called for the police department’s budget to be cut in half, with the slashed funds redirected to education and mental health services.

At an Occupy City Hall protest in @KCMO to denounce police brutality, attorney Stacy Shaw asks why would a @kcpolice officer put his knee in the back of a woman who is nine months pregnant? Deja Stallings, seated on the left, is due any day. She was charged with hindering arrest. pic.twitter.com/vp2HxiRozZ

Kansas City City Council member Eric Bunch told the Kansas City Star that the September 30 arrest of Stallings is just one of many reasons why he and his colleagues should “take whatever action within our power to completely re-imagine what public safety means in this city.”

Bunch highlighted the KCPD received a $272 million operating budget from the city for 2020-2021, which amounts to more budgeted funds than Kansas City’s health, parks, medical care and other services combined.

While Missouri law requires a city to allocate 20% of its general budget to authorities, the KCPD receives 38% of those city funds.