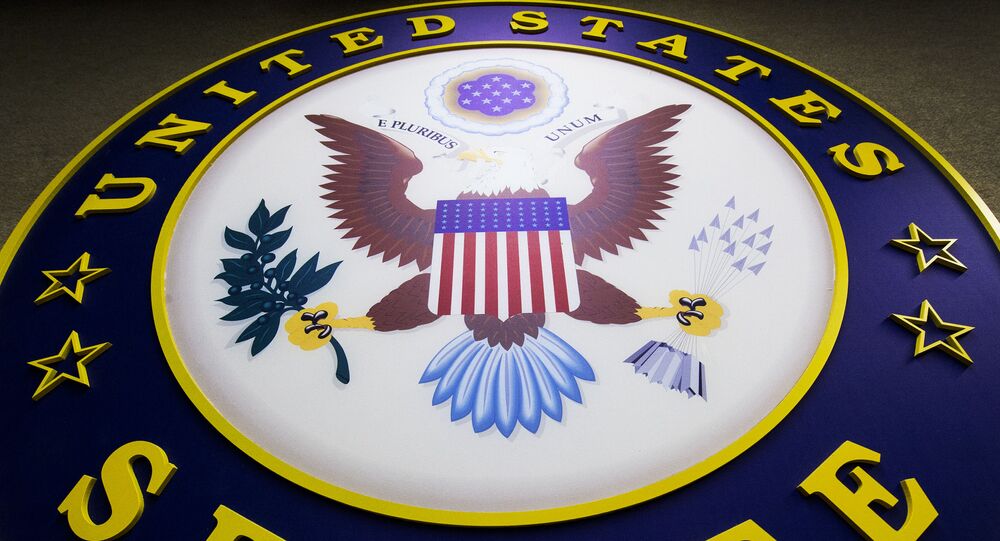 While all eyes are locked on the presidential debates and the competition between Trump and Biden, a no less important battle is to take place on 3 November, in which the future of 35 seats and control of the US Senate will be decided.

The main struggle for dominance in the Senate, currently controlled by the GOP, will take place in six states where Republican and Democratic candidates have toss-up chances of winning the vote, the Cook Political Report said, in its latest assessment of the situation. All six toss-up seats are currently held by the GOP Senators.

In three of these states, Iowa, Maine and North Carolina, Democratic candidates are currently polling higher than their Republican counterparts. North Carolina and Iowa Senators Thom Tillis and Joni Ernst lost appeal to voters in May and June, with many respondents linking the disfavor to their support of President Donald Trump's handling of the coronavirus pandemic. Polling results for the past two weeks in these two states have shown a wide range of opinion, however.

In some polls, Ernst trails 5% behind Democratic opponent Theresa Greenfield, while in others they are tied. The same goes for Thom Tillis from North Carolina, who prevailed over Democrat Cal Cunningham in one of the most recent polls conducted by East Carolina University. The results suggest that the fate of these two states is far from predetermined, as many things could happen in October.

Keeping people affordably & stably housed amid COVID-19 while not bankrupting small property owners is both a moral imperative & a public health necessity. The Administration must prioritize coupling the eviction moratorium with rental assistance.https://t.co/rUq034hSsP

The situation is a bit different for Maine's Senator Susan Collins, who trails up to 8% behind Sara Gideon in some polls. According to The Guardian, the long-time holder of Maine's Senate seat has suffered deeply over her support for Trump's earlier Supreme Court pick, Brett Kavanaugh, who has faced several accusations of sexual misconduct, although direct proof was not at the time available.

Three Toss-Up States That Have Chance of Staying Red

In the remaining three states, Montana, Georgia and South Carolina, GOP candidates currently holding their seats have the upper hand, according to recent polls, but the margin between them and their Democratic opponents is slim. South Carolina Senator Lindsay Graham is in the tightest competition among the three, slightly ahead of Democrat Jaime Harrison by a mere 1% and losing up to 2%, in some polls. Graham's diminishing performance comes as Trump has lost position in a state which has a relatively strong Democratic base with a significant percentage of African-Americans and a slightly better than national average percentage of people with higher education degrees.

Mr. Harrision is ducking the debate because the more we know about his radical policies, the less likely he is to win. It's not about medicine, its politics.

His liberal views are a loser in South Carolina - and he knows it!

GOP members Steve Daines from Montana and David Perdue from Georgia earlier showed a slim margin separating them from their Democratic challengers, but the situation has changed for both since the beginning of October. Daines earlier dominated in most polls, with a margin of up to 9%, while Perdue looked good in a majority of September surveys, with Democrat Jon Ossoff trailing behind by up to 8%. In the latest polls, both Senators retain a shot at keeping their seats, however a Graham victory hangs in the balance.

What Does It Mean for Democrats?

The 3 November election will determine who will be the majority voice in the US Senate, currently held by Republicans at 53 to 47. Control of the upper chamber of the US congress will allow Democrats the opportunity to pass bills with greater ease, should they keep the House, and Republicans to block undesired acts or decisions. For the Democratic Party to achieve the majority, it must win four additional seats, or just three, should Joe Biden and Kamala Harris secure the Oval Office, since the vice president can tip the scale in a 50–50 tie.

According to the Cook Political Report estimates, two GOP seats, held by Arizona's Martha McSally and Colorado's Cory Gardner, are at significant risk of going Democratic, while only one Dem seat, held by Alabama's Doug Jones, is gravitating toward turning GOP. That gives the Democrats one of at least three seats needed to have a shot at controlling the Senate. With three more, they are almost guaranteed at achieving it.

In this light, if Graham loses, Daines and Perdue lose their seats and one of the remaining three toss-up states goes Dem – the Democratic Party has a possibility of winning the upper chamber and with it the entire Congress. If the Biden-Harris ticket wins, the GOP would require a miracle to keep the Senate red. With less than a month until voting day, many things remain in the balance in the races for the swing-states.