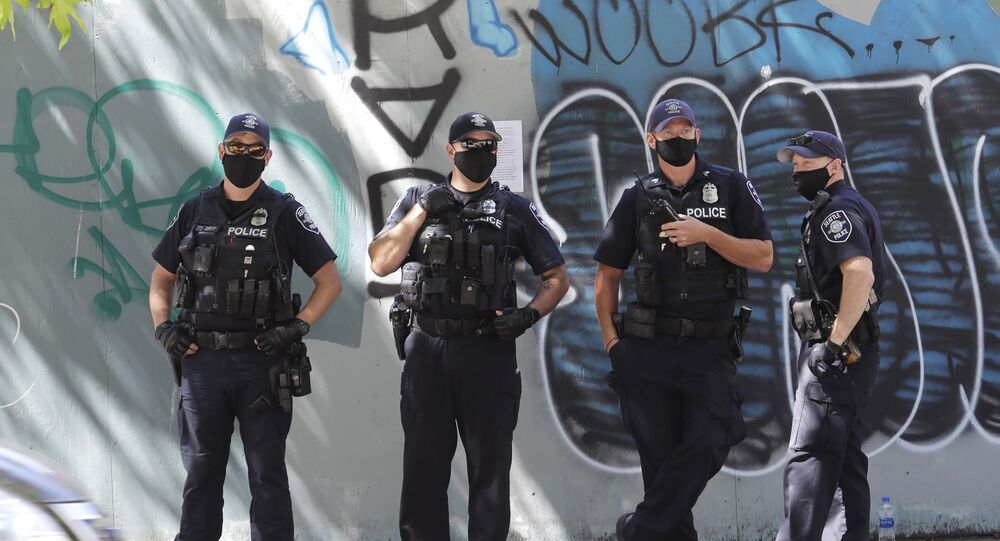 The Capitol Hill Organised Protest group has confirmed the artists will be compensated for their creative work on the mural, without giving the overall sum, though, citing upcoming additional maintenance costs.

As the Seattle authorities reportedly paid street artists to restore a Black Lives Matter mural near the former Capitol Hill Organised Protest zone after it appeared faded and chipped, they also inadvertently funded such controversial inscriptions such as “ACAB”, “f***police”, and “100% Antifa”.

HAPPENING NOW: Newly minted #BlackLivesMatter mural on Pine St. in Capitol Hill is being “cleaned up.” Artist “Future Crystals” was commissioned by the city to make the second “E.” But decided to add some anti police graphics without permission from city or other artists.#seattle pic.twitter.com/DPVzmLUHek

Twitter user Kitty Schackleford posted a livestream video on Wednesday of an unidentified artist demonstrating parts of the mural featuring a number of slurs. While one of the messages spotted on the renovated mural threatened to charge Mayor Jenny Durkan, whose administration is paying for the work of art, a second read “100% Antifa” - a line used Michael Reinoehl, the Portland activist allegedly behind the murder of a Patriot Prayer demonstrator in August.

Apparently the city of Seattle is paying artists, including this militant streamer to permanently restore the Black Lives Matter mural outside the CHOP zone. "ACAB," "no good cops in a racist system," & "abolish ICE" (among other things) are now officially endorsed by the city. / pic.twitter.com/XHFuspU0qf

Reinoehl, who called himself a member of the Antifa movement, was later killed by federal marshals as they were attempting to arrest him.

“The funny thing is... the city of Seattle is paying me to do this, so it’s beautiful”, the artist said in the video posted by Shackleford. He then went on to read out a couple of other messages, saying, “No good cops in a racist system, city of Seattle. Jenny Durkan, you’re next. You can’t hide. We charge you with – I gotta finish the sentence”.

Hardly had the BLM mural been restored, when city authorities and artists working on the project apparently took notice of anti-police slurs and other slogans featured on the final work, supposedly done by an artist called Future Crystals, judging by the recent contents of his Instagram page.

As follows from a video by journalist Jonathan Choe the eyebrow-raising messages were "cleaned up" on Thursday afternoon, after they failed, expectedly, to gain the authorities’ approval. Future Crystals defended them, though, as "artistic expression”.

Seattle police have engaged in quite a few violent clashes with protesters over the BLM-marked summer: just one recent incident reportedly saw at least six officers injured.

On top of this, local law enforcement chief Carmen Best, resigned in August after the City Council voted to cut her salary and that of her command staff while trimming the department’s budget by almost $4 million and reducing the force by as many as 100 officers.

Focus on the Mural

Last month, the 15 artists who originally created the mural came up with a plan alongside the City of Seattle's Office of Arts and Culture to preserve it after parts of it became faded, outlet KUOW reported.

They created the mural in June on Seattle’s Pine Street, painting it in colourful block letters. One of the artists, Takiyah Ward, said city crews were actually planning to etch the letters into the street for them to be better preserved as time passes.

"We're just digging into even further this message — this idea, the movement, making it really permanent. And so, we're all super excited about that fact. They're going to etch the letters out in stone ... which will then allow us to layer the paint and colours in a way that makes them more permanent”, Ward explained.

SDOT confirmed that the artists will be financially compensated for the renovation, though didn’t specify the amount. They told the Capitol Hill Seattle Blog that they wouldn’t know the final cost of the project until it’s finished. Even after completion, “there will be ongoing investments to preserve the artwork in the future”, SDOT remarked.