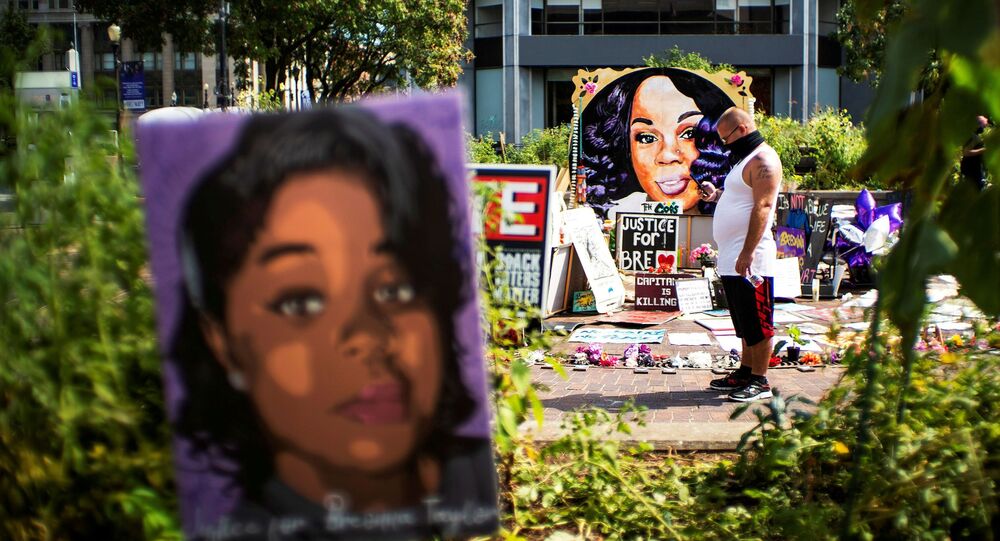 Police bodycam footage released on Wednesday shows the officers who fatally shot young black woman Breonna Taylor in March left her apartment without checking if she was still alive and needed medical assistance.

Video released by Louisville, Kentucky police shows a SWAT team called to the fatal shooting of black woman Breonna Taylor took minutes to check if she was alive or dead.

The bodycam footage from the Louisville Metro Police Department (LMPD) on Wednesday shows heavily-armed SWAT team officers clearing Taylor's apartment in the aftermath of a botched raid by narcotics detectives on March 13 2020.

Crucially, dialogue indicates that the officers who shot Taylor did not immediately check her for signs of life or call an ambulance, but waited for SWAT to arrive and secure the building.

As the team arrives at the building, an other officer tells them Taylor's boyfriend Kenneth Walker "said she’s down in there. He said, 'she's dead, she's down' but we weren't rushing in to check."

Three officers forced their into Taylor's home on a 'no-knock' warrant searching for her ex-boyfriend Jamarcus Glover as she and Walker slept. Walker, who insists the police did not identify themselves, opened fire with a handgun, allegedly hitting one officer in the leg.

Evidence files released b the LMPD on Wednesday showed three returned fire for a total of 32 shots. Six bullets struck Taylor, a 26-year-old emergency room technician, one of which was fatal. Previous media reports had been unclear on those details. Walker, standing beside her at the end of a corridor, was not injured.

© REUTERS / Kevin Mohatt
Redacted Grand Jury Recordings for Breonna Taylor Case Released Amid Federal Probe
Walker had already surrendered when the SWAT team arrived. Another bodycam video shows him sobbing and asking "What is this about?"

As the SWAT officers enter the apartment, one says: "She’s down at the end of the hall." Minutes pass while they secure the scene until one officer says "Check her. We gotta check her."

One officer calls for "EMS" - emergency medical services - while others say "Help roll her over" and "check her pulse." Officers ask Taylor if she can hear them and note that she has suffered a gunshot wound to the chest.

"She's done," the commanding officer says at last says ordering the others to leave. "We’ll keep one person here on her. She's done."

Taylor's death sparked a string of Black Lives Matter protests in Louisville and elsewhere in the US even before the high-profile death in police custody of George Floyd in Minneapolis in May.

The announcement late last month that none of the three detectives would face murder or manslaughter charges over the killing prompted another demonstration which saw over 100 arrests and two police officers shot and wounded.