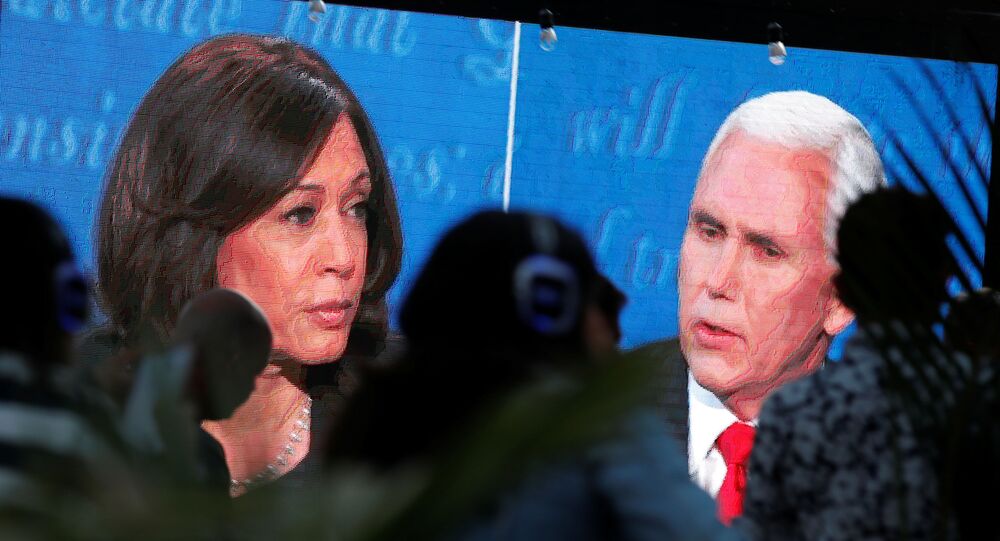 WASHINGTON (Sputnik) - US Vice President Mike Pence and California Senator Kamala Harris attacked each other over the pandemic, Iran, climate change, and police violence before closing the debate by discussing voter fraud.

The first round of questions dealt with the pandemic, during which Harris called the White House's handling of the crisis the "greatest failure of any presidential administration in US history."

She accused the Trump administration of covering up the seriousness of the pandemic.

The vice president also said the administration has tens of millions of doses of the vaccine that will be ready before the end of the year.

Pence added that if Trump did not take the unprecedented step of shutting down the economy the US could have lost 2.2 million people. Pence also suggested that if the 2009 swine flu had been as lethal as COVID-19, two million Americans would have died when Joe Biden was vice president.

Harris raised concerns about the vaccine. Pence demanded that Harris stop undermining confidence in the vaccine.

Harris said it would be good to know who Trump owes money to and if he is making decisions based on his debt. Trump paid $750 in taxes, and is in debt for at least $400 million. Pence claimed that Trump has paid tens of millions of dollars in taxes.

In terms of policy, Harris said Biden would repeal Trump's tax bill. Pence claimed that Trump cut taxes across the board, suggesting that the average American family has received up to $2,000 in cuts. Pence also claimed that Biden will raise taxes.

Harris said Biden will invest in clean energy and research so that the US remains an innovation leader.

Pence said that Biden would not only raise taxes but would end fracking, a claim Harris quickly refuted. The vice president also claimed that Biden would increase regulation, abolish fossil fuels and economically surrender to Beijing.

The candidates then battled over climate change policy. Pence said a strong free market economy has led to a clean environment. The Trump administration, he added, has done it through innovation, natural gas and fracking.

Harris accused the Trump administration of not believing in science.

Pence said that the US wants to improve relations with China but will hold Beijing accountable over COVID-19.

The debate then turned to the topic of relations with Iran, with Harris lobbing an opening salvo.

"Look at the Iran nuclear deal, which now has put us in a position where we are less safe because they are building up what might end up being a significant nuclear arsenal," Harris said on Wednesday. "Because of Donald Trump's unilateral approach to foreign policy, coupled with his isolationism, he pulled us out and has made America less safe."

Harris vowed that the Biden administration would reform policing, including imposing a ban on choke-holds in light of violence against Blacks.

Pence denied that the US justice system is systemically racist, calling the assertion an "insult" to law enforcement. He said that while there was no excuse for what happened to George Floyd, there is also no excuse for rioting.

The vice president said African Americans were 19 times more likely to be prosecuted for minor drug offenses than whites and Hispanics while Harris was attorney general of California. Harris said her role as attorney general in California is a model of what the US needs to do and what will happen in the Biden administration.

The final round dealt with several issues around the integrity of the November 3 election, with Harris accusing Trump of trying to suppress the vote. In addition, Harris also encouraged Americans to vote early and use mail-in ballots.

Trump has repeatedly claimed that mail-in ballots could lead to voter fraud.

There was more at stake than usual on Wednesday night, given that the final two presidential debates could be canceled due to Trump’s COVID-19 diagnosis. Wednesday’s debate was also unique because, out of an abundance of caution, organizers installed plexiglass shields between the two candidates.

USA Today Washington Bureau Chief Susan Page moderated the debate which was held at the University of Utah in Salt Lake City.