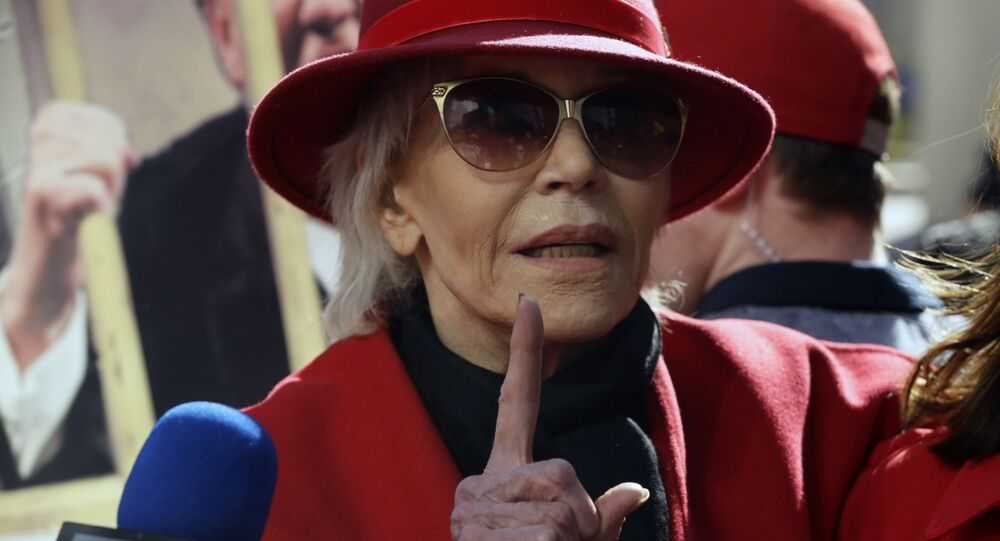 The administration of US President Donald Trump has been consistently criticized over its response to the ongoing coronavirus (COVID-19) pandemic, which has so far killed over 211,000 Americans and infected over 7.5 million people in the US alone, including Trump, his wife and many White House officials.

American actress Jane Fonda characterized the coronavirus pandemic as “God’s gift to the left”, calling on Americans to use a “tremendous opportunity” and remove the Republican president, Donald Trump, in the 3 November US presidential election. She added that the country is currently at a crossroads.

“We are people who can help determine which way humanity goes. What a great gift, what a tremendous opportunity, we’re just so lucky, we just have to use it with every ounce of intelligence and courage and wherewithal we have,” Fonda said in a video published on Tuesday.

The 82-year old actress and progressive political activist argued that the COVID-19 pandemic “has ripped the Band-Aid off” what Trump is and what his policies look like.

“I just think COVID is God's gift to the left,” Fonda suggested, adding that it was “a terrible thing to say. I think it was a very difficult thing to send down to us, but it has ripped the Band-Aid off who [Trump] is and what he stands for and what is being done to average people and working people in this country.”

As Election Day is less a month ahead, Fonda said that Americans now have a “chance to harness that anger and make a difference”.

Fonda’s remarks were met with outrage by some on social media platforms, with some Twitter users accusing her and Democrats of seeking “political favor” instead of talking about the loss in life and the the damage caused by the virus pandemic.

“I love the way she rocks back with a smirk at the end like she’s just shared something fun instead of talking about the death of 200k+ ppl, the isolation and fear of the poor and unemployed, the tragedy of childhood stolen from our kids,” someone tweeted. “What a ghoul! All for political favor.”

I love the way she rocks back with a smirk at the end like she’s just shared something fun instead of talking about the death of 200k+ ppl, the isolation and fear of the poor and unemployed, the tragedy of childhood stolen from our kids. What a ghoul! All for political favor.

It’s what the left has been waiting for....something, anything to kill the economy. This virus was so conveniently timed. Coincidence?

That's all they care about, that power! Care nothing about americans.

God does not take sides with those that creates mayhem. @Janefonda , have you have forgotten that the disease came from China, not God!

Absolutely, that's why they also never want put any blame with China, because behind the scene they're texting them heart Emojis.

I don’t think COVID is a gift to anyone @Janefonda

The COVID-19 disease has infected over 7.5 million people in the United States and killed 211,725 people in the nation as of Wednesday, the highest fatality rate of any country in the world. The Trump administration has been widely accused of failing to handle the crisis.

Trump and his wife, Melania, have also tested positive for the virus as part of a COVID-19 outbreak inside of the White House, where a number of senior administration officials have contracted the disease.