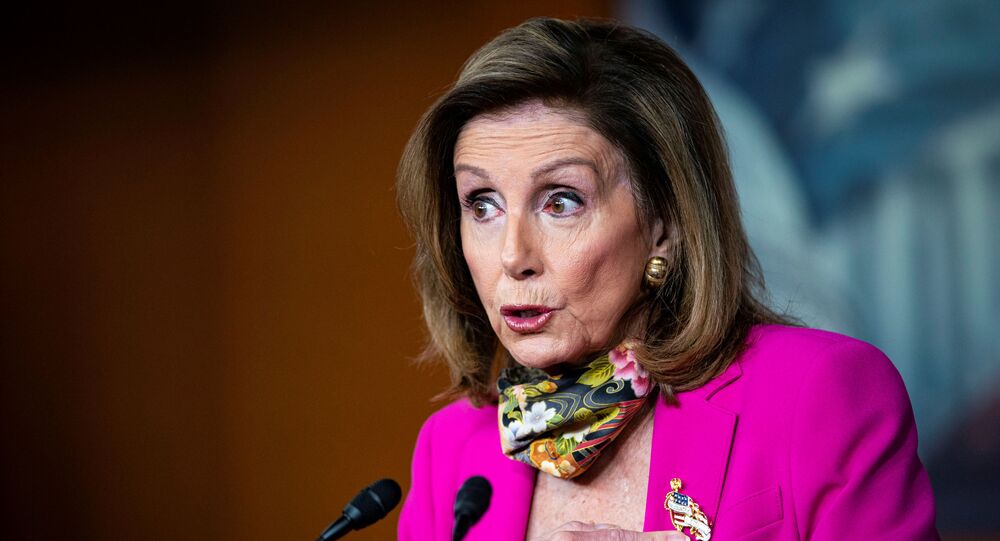 In negotiations with Secretary of the Treasury Steven Mnuchin, Democratic House Speaker Nancy Pelosi pushed for a larger stimulus package than the one proposed by the GOP. It included provisions for financial aid for illegal migrants, which the speaker reportedly refused to give up during talks.

Soon after abandoning crucial talks on a stimulus package with Democrats, which had been in a stalemate for weeks, US President Donald Trump came up with an alternative course of action – he invited Democratic leaders, specifically House Speaker Nancy Pelosi, to consider passing several standalone bills instead of a single package. These bills would focus on rescuing the economic sectors suffering the most due to the pandemic, while one of them would allow for another round of $1,200 stimulus checks for US citizens.

If I am sent a Stand Alone Bill for Stimulus Checks ($1,200), they will go out to our great people IMMEDIATELY. I am ready to sign right now. Are you listening Nancy? @MarkMeadows @senatemajldr @kevinomccarthy @SpeakerPelosi @SenSchumer

POTUS has vowed to sign the bill providing $1,200 checks immediately if it passes the Senate and the House; however, Pelosi and other Democratic leaders haven't responded to Trump's offer, with the House speaker only condemning the president for ending talks on the stimulus package. In the past, Pelosi has strongly opposed the idea of chopping the package into a set of standalone bills, which would essentially separate those parts of the package that enjoy bipartisan support from those that are advocated mainly by Democrats, such as help for illegal migrants.

The lack of action on Pelosi's part regarding Trump's offer hasn't gone over well with netizens, many of whom have blasted the speaker for not caring about US citizens, but only for her and her party's agenda. They suggested that otherwise she would have had no trouble with passing the $1,200 stimulus checks bill, which would be of great help to those who lost their jobs due to the COVID-19 pandemic.

TRUMP: "If I am sent a Stand Alone Bill for Stimulus Checks ($1,200), they will go out to our great people IMMEDIATELY"...

Why won't Nancy Pelosi agree to a stand alone bill for $1,200 stimulus checks direct to the people?

She doesn't care about YOU.

Some noted that Pelosi is just holding stimulus payments for US citizens "hostage" in order to pass measures unpopular with the GOP, such as payments for illegal migrants or "bailouts" for cities and states run by Democrats.

The American people are struggling right now, but you don’t care.

You are an EVIL person.

Several twitterians suggested that voters should call the speaker's office and remind her to put the interests of Americans before anyone else's.

Nancy Pelosi is holding up your stimulus check ($1200) so she can get funding for ballot harvesting and social services for illegal immigrants.

It’s too bad @SpeakerPelosi @SenSchumer have already surrendered as usual. They never fight for us. They just complain. https://t.co/M9fXoefM2j

One netizen praised Trump's offer to the Democrats as a smart move that leaves the party without any better options – either take the deal or tell US citizens they don't care about them.

Nice move by #Trump putting the ball in Nancy Pelosi's court on the $1200 item of the Stimulus package.

If she rejects a completely bipartisan provision, it'll be hard for her to look America in the face and say she cares.

Art of the Deal energy.

Meanwhile, supporters of Nancy Pelosi on Twitter came to her defence, arguing that her stimulus package aims to provide more help than the GOP's counter-offer. Some recalled that the two parties had a similar standoff in May, when the Republicans allegedly stalled the adoption of stimulus measures proposed by the Democrats.

Don’t let #trump make it sound like Nancy won’t give out stimulus checks to Americans. She wants to give out MORE Money and the @GOP won’t budge. The #GOPSuperSpreaders are making it sound like #NancyPelosi won’t help but she wants to help more then Trump. Look @ her proposal https://t.co/3LvEMxqvu9

It's not on Nancy Pelosi to take the deal #MoscowMitch put forth. The question is why won't he just take the deal she put forth in May. Why is it that she is questioned, and not him. There has been deal on the table for months.

The talks on the stimulus package, which were called off by Trump on 6 October, had been in a deadlock for weeks, as the Democrats, represented by Pelosi, refused to drop certain parts of the bill. The Republicans, in turn, opposed the idea of passing the $2.2 trillion stimulus package, advocating for less spending with a $1.62 trillion counter-offer.