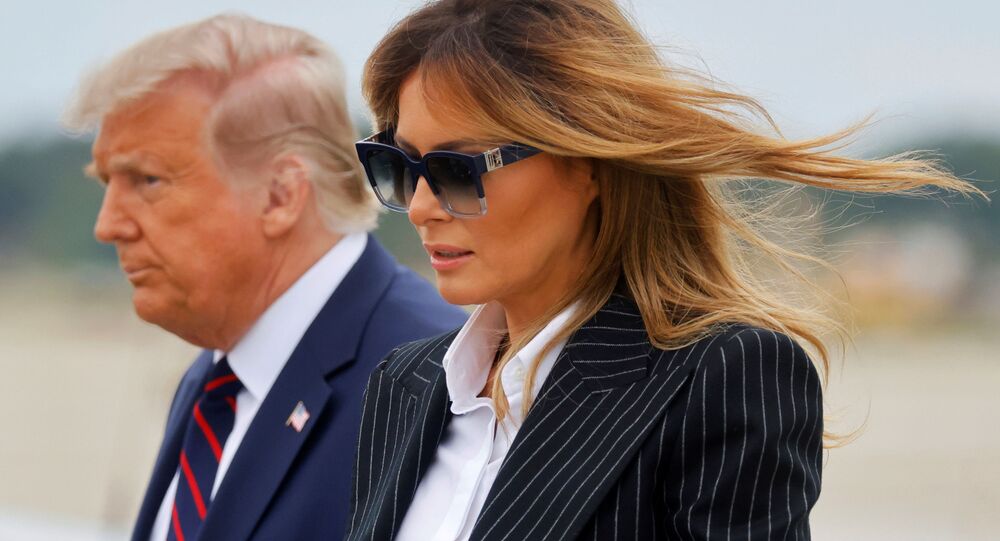 As a whole series of positive corona diagnoses have swept through the US government, FLOTUS pointed to the first family’s top priority - to work for the well-being and safety of the White House staff.

As President Donald Trump was discharged from hospital on Monday, First Lady Melania, who was diagnosed with COVID-19 alongside her husband on Thursday night, outlined the safety guidelines in place for those staying or working in the White House, which is under her jurisdiction.

"The health and safety of the residence staff is of the utmost importance to the first family", Melania Trump said in the statement, stressing that hospital-grade disinfection policies have been effective and staff have been encouraged to work remotely, whenever possible, ever since the start of the pandemic in March.

Among others, senior aide Ivanka, who has tested negative for the disease, has of late been working from home for safety reasons.

White House deputy press secretary Judd Deere said staff are being advised not to come to work if they show symptoms and that a host of measures are in place to better protect those on the job, especially given certain White House premises typically being crammed with people.

"In addition to encouraging staff not to come to work if they have any symptoms, social distancing, readily available hand sanitiser, regular deep cleaning of all work spaces, and recommended facial coverings, those in close proximity to the president will continue to be tested for COVID-19 to ensure exposure is limited to the greatest extent possible", he said in a statement.

For instance, the White House press office, where press secretary Kayleigh McEnany and two of her deputies have come down with the highly contagious infection, is working on a rotating schedule, with staff taking turns to manage the desks and phones.

Trump aides including Hope Hicks, one of his closest advisers, and his "body man" Nick Luna also tested positive, as have an escalating number of staff in the residence and Pentagon officers - adding to fears among the rest of the staff they may have been exposed to the coronavirus.

A cleaning crew outfitted in hazmat suits later sanitised the West Wing after President Trump returned to the White House, where daily tests are conducted on staffers in the president's immediate circle, while the rest or employees are checked for the coronavirus every 48 hours.

The residence has also installed additional sanitisation and filtration systems to help keep the air clean and not let the virus linger there.

A "well-being" consultant has reportedly been hired for staff members to anonymously address any mental health concerns due to the virus outbreak in the administration.

Trump admitted that his administration previously downplayed the pandemic, with officials and POTUS often seen turning a blind eye CDC recommendations. Yet, photos taken after his arrival from hospital showed a renewed attempt at precaution.

President Trump walked out of the Walter Reed military hospital on Monday, where he was treated with an antibody therapy cocktail and antiviral solution remdesivir in a combination reportedly hardly tested on anyone before. He's now back at the White House, and claiming he feels even "better than I did 20 years ago".

Despite concerns he could have been allowed to travel back to the White House prematurely, thereby further exposing his aides to the virus, the president's doctors insisted that their evaluations, and "most importantly his clinical status, support the president's safe return home". POTUS has since appeared in a video, urging Americans not to let the contagious novel coronavirus dominate their lives.

On Tuesday, Trump's medical team stated that he already showed no infection symptoms. White House physician Sean Conley said in a memorandum that Trump's vital signs and physical exam remain stable, adding that the US president is doing "extremely well". Regardless, deputy press secretary Judd Deere said staff were limiting their exposure to the president and were wearing the appropriate personal protective equipment.

"The American people can rest assured with the president's return that the White House is taking every precaution necessary to protect not only him and the first family, but every staff member working on the complex to support the federal government's operations consistent with CDC guidelines and best practices", he said.