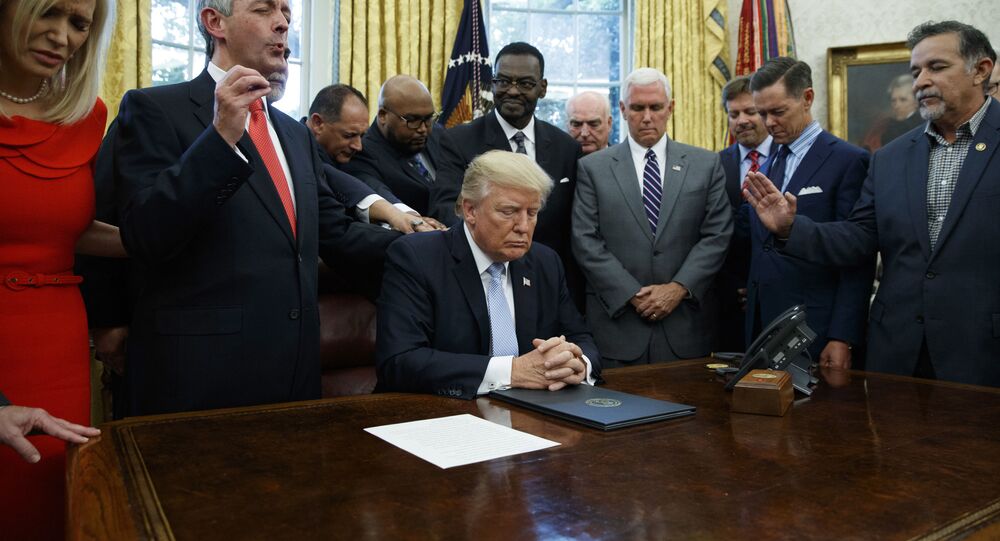 During an interview last week with Scott Hennen and Todd Mitchell, hosts of 'What's On Your Mind?' on a North Dakota radio station, Eric Trump listed a number of his father's major accomplishments, including "saving Christianity".

US President Donald Trump's third child Eric Trump, during a radio interview last week that resurfaced and went viral Tuesday, said his father has "literally saved Christianity" from Democrats who are attempting to "close churches all over the country" amid the ongoing coronavirus (COVID-19) pandemic.

Eric slammed the Democratic Party as "the party of the atheist", arguing that they wanted to "attack" Christianity by closing churches, while they are "totally fine keeping liquor stores open" amid the pandemic.

Here's the audio of Eric Trump listing "he literally saved Christianity" as one of his father's accomplishments in office. pic.twitter.com/uJG6YUPAbq

Listing his father's accomplishments during the interview, recorded prior to Trump's Friday announcement of his infection with COVID-19, Eric also suggested that President Trump has "more backbone than any person who's ever lived".

Netizens were shocked by Eric's remarks, with some reminding of an early-September report about Trump allegedly mocking his Christian supporters, saying "Can you believe that bulls**t?"

Wonder how Jesus feels about this

God did not and does not need a fallen, corrupt man to "save" Christianity. An omnipotent God is in no need of DJT. However, it appears to me that DJT is greatly in need of Him.

Some other users refuted Eric's claims, arguing that Trump's rival in the 3 November presidential election Democratic nominee Joe Biden "literally goes to church every Sunday and is a devout Catholic".

@EricTrump Biden literally goes to church every Sunday and is a devout Catholic. There is not one Democrat that wants to "close churches". Democrats aren't the "party of atheists" we just understand the separation of church and state. Where do you get this shit from?

Bears repeating: Joe Biden is a devout Catholic! When is the last time we saw ANYONE named Trump in church? I'll wait.