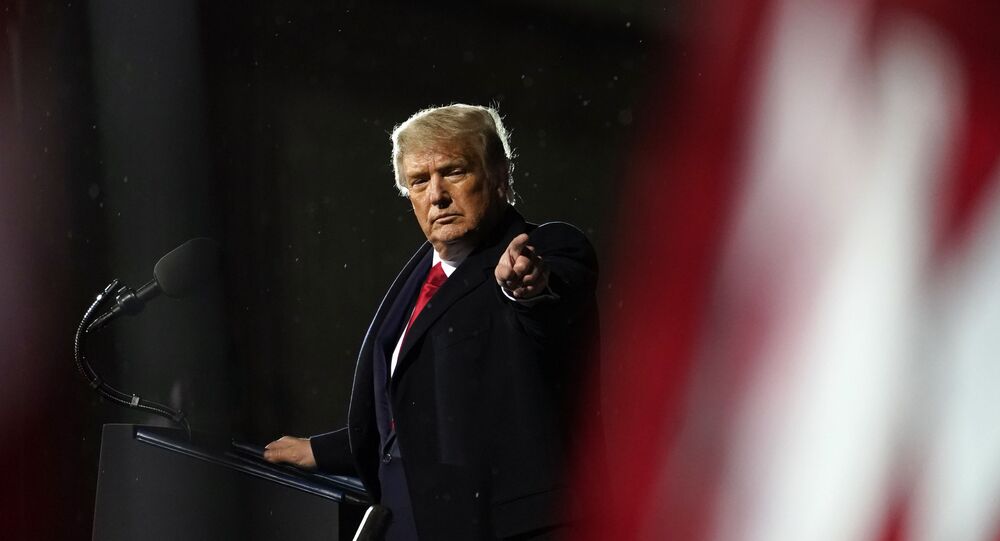 US President Donald Trump has been facing accusations from the Democrats of so-called "collusion" with the Russian government since the 2016 election campaign. Recently, reports emerged suggesting that it was Hillary Clinton who has plotted the "Russiagate" in order to drag attention away from her e-mail scandal.

President Donald Trump announced Tuesday that he has authorised full declassification of the documents pertaining to "Russia hoax" and the scandal with the e-mails of the former Democratic presidential candidate Hillary Clinton.

"I have fully authorized the total Declassification of any & all documents pertaining to the single greatest political CRIME in American History, the Russia Hoax. Likewise, the Hillary Clinton Email Scandal. No redactions!", Trump tweeted Tuesday.

In a follow-up tweet, Trump noted that "all Russia Hoax Scandal information was Declassified by me long ago", insisting that "people acted very slowly".

All Russia Hoax Scandal information was Declassified by me long ago. Unfortunately for our Country, people have acted very slowly, especially since it is perhaps the biggest political crime in the history of our Country. Act!!!

​​His announcement comes after reports emerged suggesting that it was a plan of Hillary Clinton to "tie" Trump to Russia ahead of the 2016 US presidential election.

POTUS has been facing allegations on collaborating with the Russian government during his 2016 election campaign, even though no evidence was provided to back the accusations and Moscow has been repeatedly denying any connections with the Trump campaign or other interference with the US electoral process.

Later in 2017, Robert Mueller launched a special investigation to look into the alleged Trump's connections with Russia that lasted for two years. It was finalized in March 2019 with a 448-page report, which found no evidence of any links of the Trump campaign to the Russian government.

Recent reports suggested the hype around the alleged Trump-Russia "collusion" was ramped up by Clinton so that the public attention would be distracted from the controversy around her e-mails. The fact that she has been using a private server instead of a government one to deal with all her correspondence since when she served as Secretary of State first emerged in March 2015 after the report by The NYT.

Her preference of private e-mail server caused debates, with some people believing it was against the federal law to use personal e-mail account for working with government-related correspondence. Clinton herself insisted she had been doing so as a matter of "convenience".

The controversy drew wide attention during the 2016 presidential election, where Clinton participated as a Democratic nominee. In July 2016, former CIA director James Comey said that the results of the investigation of Clinton's e-mails did not provide grounds to prosecute her, while noting, however, that she had been "extremely careless".