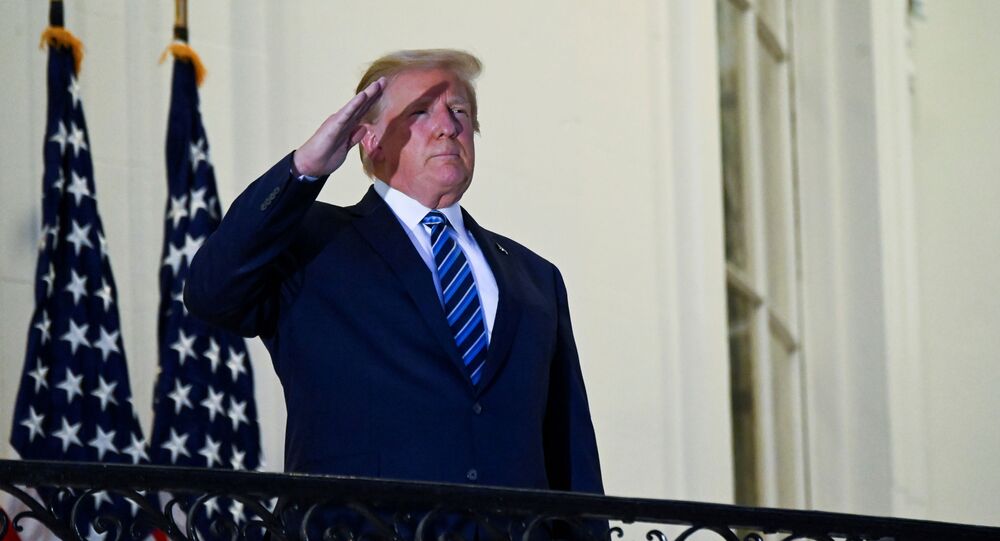 WASHINGTON (Sputnik) - US President Donald Trump said in a statement on Tuesday that he asked Senate Majority Leader Mitch McConnell to focus on approving Supreme Court nominee Amy Coney Barrett and to set aside negotiations with Democrats to pass a new COVID-19 relief bill.

"I have instructed my representatives to stop negotiating until after the election when, immediately after I win, we will pass a major Stimulus Bill that focuses on hardworking Americans and Small Business," Trump tweeted. "I have asked @senatemajldr Mitch McConnell not to delay, but to instead focus full time on approving my outstanding nominee to the United States Supreme Court, Amy Coney Barrett."

...@senatemajldr Mitch McConnell not to delay, but to instead focus full time on approving my outstanding nominee to the United States Supreme Court, Amy Coney Barrett. Our Economy is doing very well. The Stock Market is at record levels, JOBS and unemployment...

Trump rejected the congressional Democrats' $2.4 trillion COVID-19 relief bill, which he claims will be used to bail out Democrat-voting states that purportedly have high crime rates.

In response to Trump's move, the US Speaker of the House of Representatives, Nancy Pelosi, observed that by halting negotiations on a new coronavirus relief bill amid the ongoing resurgence in infection cases, Trump is showing his "true colors". She accused the Republican president of "putting himself first, at the expense of the country".

"Walking away from coronavirus talks demonstrates that President Trump is unwilling to crush the virus, as is required by the Heroes Act," Pelosi said in a statement. "He shows his contempt for science, his disdain for our heroes - in health care, first responders, sanitation, transportation, food workers, teachers, teachers, teachers and others - and he refuses to put money in workers' pockets, unless his name is printed on the check."

Pelosi has been trying to get Republicans to agree to pass the Health and Economic Recovery Omnibus Emergency Solutions (HEROES) Act, which the Democrats originally proposed at $3 trillion, before reducing it to $2.2 trillion and agreeing to further revisions in recent weeks.

The legislation passed the House of Representatives last week and is now pending in the Republican-controlled Senate.

Congress passed four packages of the Coronavirus Aid, Relief, and Economic Security (CARES) Act in the second quarter of this year, dispensing roughly $3 trillion to disburse as loans and grants to businesses, paycheck protection for workers, and personal aid to qualifying US citizens and residents.

Republicans and Democrats have been locked in a stalemate on a successive package to CARES, arguing over the size of the next relief, as hundreds of thousands of Americans, including tens of thousands in the airline sector, are at risk of losing their jobs as a result of the ongoing pandemic. Trump, who stands for reelection in November, accused Pelosi of playing football over the issue. The House Speaker retorted that any successful deal must be to the advantage of Americans and not for Trump’s political expediency.