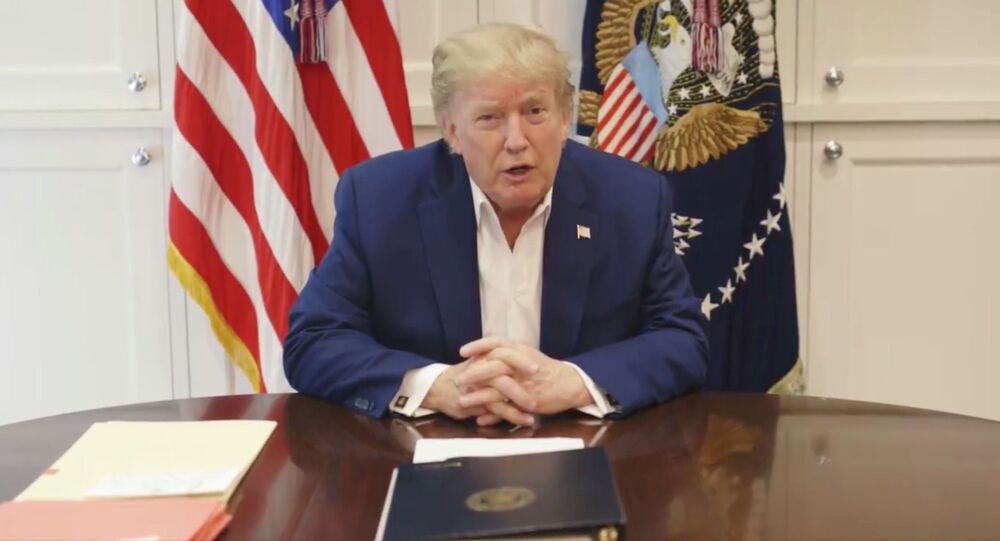 On Monday, US President Donald Trump announced he planned to leave Walter Reed military hospital later in the day after spending several days there due to symptoms of COVID-19. However, his doctors warned the president's illness is not yet over.

"Though he may not be entirely out of the woods yet, the team and I agree that all our evaluations, and most importantly his clinical status, support the president's safe return home, where he'll be surrounded by world-class medical care 24/7," Dr. Sean Conley, Trump's personal physician at the White House, said at a Monday news conference.

Conley added that Trump would be remaining in the residential wing of the White House and not yet returning to work. The Washington, DC, presidential mansion has itself become a COVID-19 hotspot, as numerous Trump administration officials have tested positive for SARS-CoV-2, the virus that causes the respiratory illness, including most recently White House Press Secretary Kelly McEnany.

Earlier on Monday, Trump tweeted he would be leaving the hospital at 6:30 p.m. Monday evening.

I will be leaving the great Walter Reed Medical Center today at 6:30 P.M. Feeling really good! Don’t be afraid of Covid. Don’t let it dominate your life. We have developed, under the Trump Administration, some really great drugs & knowledge. I feel better than I did 20 years ago!

​"Feeling really good! Don’t be afraid of Covid. Don’t let it dominate your life. We have developed, under the Trump Administration, some really great drugs & knowledge. I feel better than I did 20 years ago!" Trump said.

Conley said Trump had met "most of the discharge requirements." He later noted Trump had been given supplemental oxygen at least once, but declined to go into extensive detail, citing privacy rules created by the Health Insurance Portability and Accountability Act (HIPAA). That included dodging repeated questions about when Trump's most recent negative test was, saying, "I don't want to go backwards."

Conley noted Trump is on a "routine regimen of COVID therapy" and said Trump had not taken a fever-reducing drug in at least 72 hours, but would not go into precise detail about the medication the president was taking. However, he previously noted Trump was taking dexamethasone, a steroid commonly reserved for severe cases of COVID-19.

CNN reported that some of Trump’s doctors at Walter Reed had voiced concerns about Trump leaving the hospital too soon, warning it could lead to a second hospitalization later due to either his ongoing COVID-19 infection or the side-effects of experimental drugs given to Trump.

"I think you've seen the videos, and now the tweets, and you'll see him shortly. You know - he's back," Conley told one reporter who asked about symptoms and side-effects that might still be affecting Trump.

CNN journalist Dana Bash also reported, citing a source with knowledge of Trump's phone calls, that he had said on Monday: “I need to get out of here.”

On October 2, Trump flew to Walter Reed National Military Medical Center in Bethesda, Maryland, following his announcement he had been diagnosed with COVID-19.

According to data collected by the New York Times, more than 7.4 million Americans have contracted COVID-19, and nearly 210,000 have died from the virus.