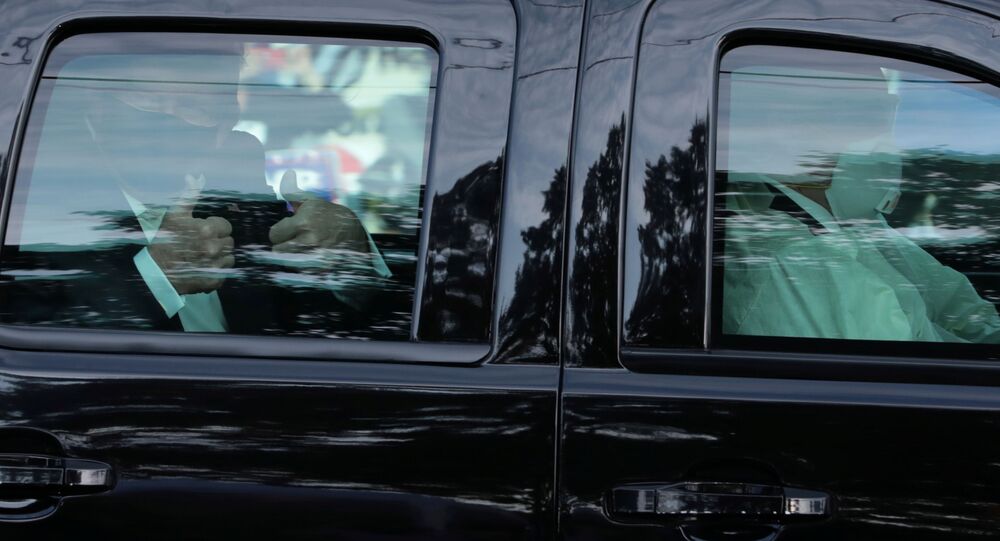 WASHINGTON (Sputnik) - Trump's brief appearance before his supporters gathered near the hospital endangered all the people who were with him in the vehicle, Dr James Phillips, attending physician at the Walter Reed National Military Medical Center, said.

The physician posted on Twitter that the black Surburban Trump was inside was "hermetically sealed against chemical attack", which, he says, posed a risk of contracting COVID-19 to every person inside the vehicle.

"Every single person in the vehicle during that completely unnecessary Presidential 'drive-by' just now has to be quarantined for 14 days", Phillips said, calling his short trip "insanity".

That Presidential SUV is not only bulletproof, but hermetically sealed against chemical attack. The risk of COVID19 transmission inside is as high as it gets outside of medical procedures. The irresponsibility is astounding. My thoughts are with the Secret Service forced to play.

Phillips has repeatedly criticised Trump before on a number of issues, including his response to the pandemic and his 2020 campaign, and has even called on the president to resign.

ALERT??? All Caps? Sent out to the entire world? Hmmm. Seems to me like the President is hoping to cause a panic. How ironic. https://t.co/8nTicWvCR2

The President has a duty to the country to resign.

Trump briefly left the Walter Reed hospital to greet his supporters on Sunday. His motorcade drove past a small crowd of his supporters and then returned back to the medical center. Trump waved from behind the closed window of the car and did not get out of the vehicle. He was wearing a face mask, just like all the other people inside the SUV.

Users on social media noticed that the Secret Service agents that were inside the vehicle with Trump were actually provided with N95 respirators. Protection of this kind is recommended by the Centers for Disease Control and Prevention to prevent exposure to infectious respiratory illnesses, as they filter out at least 95 percent of very small particles.

White House spokesman Judd Deere also confirmed that "the movement was cleared by the medical team as safe to do" and that "appropriate precautions were taken to protect the President and all those supporting it, including PPE".

In a video released on Twitter on Sunday, Trump said he was going to make "a little surprise visit", hinting at his planned appearance before supporters at Walter Reed. Earlier on Sunday, he also thanked his fans and supporters gathered outside the medical facility, tweeting that they "really love our Country."

Trump arrived at the Walter Reed National Military Medical Center in Maryland on Friday, after announcing on Twitter that he and his wife Melania had tested positive for the coronavirus. Dr Brian Garibaldi of Johns Hopkins University, in charge of the president’s therapeutics, said on Sunday that Trump had responded well to the remdesivir antiviral treatment and that he could be allowed to return to the White House as early as Monday.