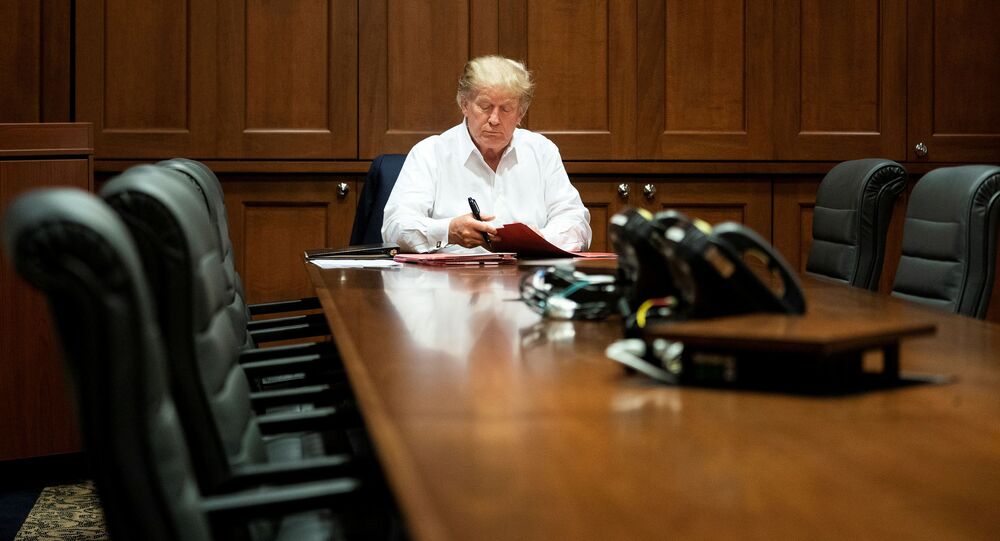 MOSCOW (Sputnik) - US President Donald Trump has been following media coverage of his hospitalization and was reportedly agitated by descriptions of his condition as concerning, CNN reported on Sunday citing sources.

According to the network, Trump was particularly upset when the news broke that doctors expressed concern over his health since he was diagnosed with COVID-19 earlier in the week.

Trump’s condition has been subjected to feverish speculation in the US media after White House physician Sean Conley gave an unconvincing account of the president’s health at a news briefing Saturday.

The news briefing was immediately followed by leaks from the White House staff that doctors had expressed concern over the president’s health and that he was given supplemental oxygen while at the White House, before being hospitalized at the Walter Reed Military Medical Center.

© AP Photo / Joyce N. Boghosian
NSA Robert O'Brien Says Trump Feeling 'Very Well', Transition of Power Not on the Table
Trump has since posted a video where he claimed to be “feeling much better” and that he expects to return to the White House soon. Conley, also on Saturday, said that Trump has made progress since being diagnosed and that "while not yet out of the woods, the team remains cautiously optimistic."

Trump and his wife Melania tested positive for COVID-19 on Thursday, shortly after his communications director Hope Hicks came down with the disease. The diagnosis has thrown the already tumultuous presidential election campaign into further disarray.