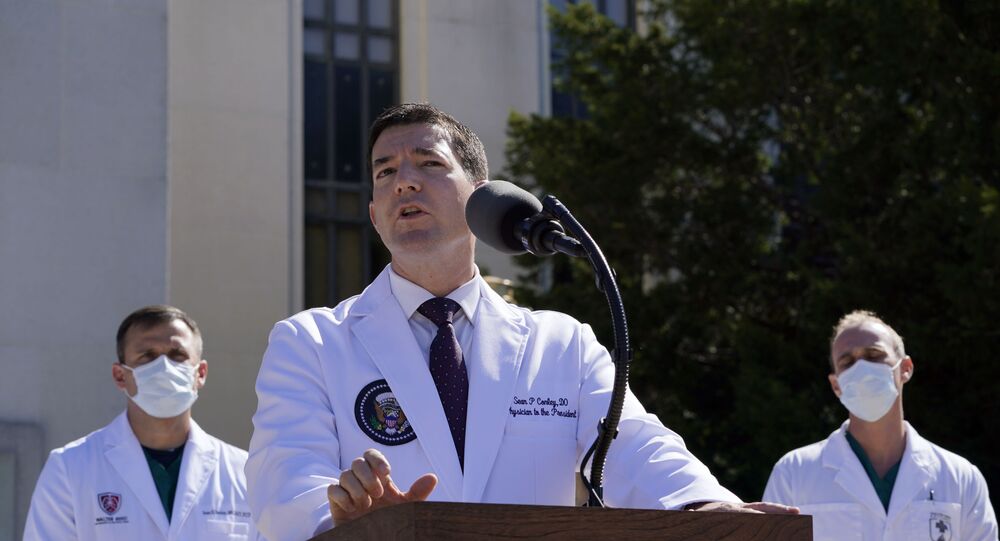 The president reported testing positive for the novel coronavirus in the early hours of Friday morning, saying he and First Lady Melania Trump had contracted the disease.

President Donald Trump is "doing very well" and is on track to making a full recovery, presidential physician Dr. Sean Conley has announced.

"Just 72 hours into the diagnosis now, the first week of Covid, and in particular days 7-10 are the most critical in determining the likely course of this illness. At this time the team and I are extremely happy with the progress the president has made," Conley said, speaking to reporters in Bethesda, Maryland on Saturday.

According to the doctor, Trump experienced fever, a "mild cough, some nasal congestion and fatigue" on Thursday, "all of which are now resolving and improving."

Dr. Sean Dooley, another physician monitoring the president's health, said Trump's cardiac, liver and kidney function were all "normal," and that he was not receiving oxygen, and has shown no problems breathing or walking around the White House Medical Unit.

"He's in exceptionally good spirits, and in fact as we were completing our multidisciplinary rounds this morning, the quote he left us with was 'I feel like I could walk out of here today', and that was a very encouraging comment from the president," Dooley added.

Doctors say Trump received a "special antibody therapy" 48 hours ago, and received a dose of Remdesivir on Friday, with a five-day treatment planned.

Dr. Conley said Trump has already been given "plenty of work" from the US Chief of Staff, and "he's doing it." The doctor did not specify what this "work" was.

Conley declined to provide reporters with an estimated date when Trump might be discharged.

He also declined to comment on when the president may have become infected, or by whom.

Conley said First Lady Melania Trump was "doing great," and "has no indication for hospitalization or advanced therapy," and was "convalescing at home."

Trump tweeted about his condition later Saturday, praising the "AMAZING!!!" doctors, nurses and staff helping him to fight the coronavirus "PLAGUE."

Doctors, Nurses and ALL at the GREAT Walter Reed Medical Center, and others from likewise incredible institutions who have joined them, are AMAZING!!!Tremendous progress has been made over the last 6 months in fighting this PLAGUE. With their help, I am feeling well!

Later, the US Senate Majority Leader Mitch McConnell said on twitter that he had spoken with trump in a phone call and said the president sounded well.

Just had another great call with @POTUS. He sounds well and says he’s feeling good. We talked about the people’s business — fighting the pandemic, confirming Judge Barrett, and strengthening the economy for American families. Let’s keep our President & First Lady in our prayers.

© REUTERS / LEAH MILLIS
CNN Leads Chorus of Mainstream Media Reporting Donald Trump's COVID Condition as 'Serious'
The presidential medical team's comments were challenged by an anonymous source said to be 'familiar with the situation' who spoke to Reuters on Saturday, and who said that some of the president's vital signs over the past 24 hours have been 'very concerning'.

The source suggested that the president was not yet on a clear path to recovery, and said that the next 48 hours would be 'critical' to his care.

Separately, ABC News has reported, citing 'sources close to' the president, that Trump had been given oxygen at the White House on Friday before his hospitalization at Walter Reed.

Trump was taken to the Walter Reed National Military Medical Center in Bethesda on Friday night "as a precautionary measure" after he announced that he and his wife had contracted Covid shortly after midnight on Friday morning.