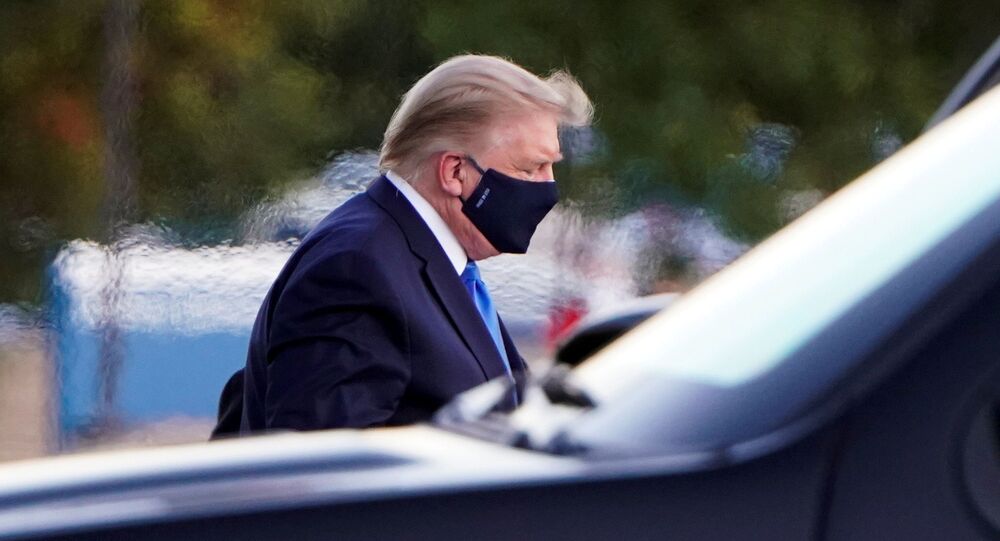 Donald Trump's high-rolling fundraiser at the Trump National Golf Club Bedminster, New Jersey, took place 1 October, and the next day the US President Donald Trump revealed that he and First Lady, Melania, had tested positive for COVID-19 and would go into quarantine.

New Jersey authorities are scrambling to deal with the possibility of a surge in coronavirus cases in the aftermath of Donald Trump’s high-rolling fundraiser at his golf club in Bedminster, N.J., on 1 October.

After the bombshell announcement by Trump on Friday that he and his wife, the First Lady Melania Trump, had tested positive for COVID-19 in the wake of earlier news that Hope Hicks, a close White House aide, had caught the respiratory disease, state authorities started contact tracing on 2 October for people who attended the fundraiser in Somerset County about 35 miles west of New York City, reported POLITICO.

​It is not clear how many people were on-site for the event, with reports of around 100 people present.

The mayor of Bedminster Township, Larry Jacobs, confirmed that measures to deal with the situation were underway, and the town "has initiated contact tracing and is looking to identify close contacts and potential exposures at the the fundraising event."

The mayor said in a statement:

"Bedminster anticipates full co-operation from the Trump Organization and from all those who attended the event. The information disclosed during contact tracing remains confidential. Bedminster Township wishes the President and the First Lady, and all who are affected with COVID-19, a full and speedy recovery."

New Jersey, which had been hit particularly hard by the coronavirus pandemic in its initial stage, with thousands of new cases each day and hospitals almost overwhelmed, had been recently forced to face a surge in cases yet again after a lull of several months.

A rise in cases was registered in the southern New Jersey town of Lakewood, known for its large ultra-orthodox Jewish population, and in late September Ocean County Health Department confirmed that there was a significant spike in registered coronavirus cases, particularly in the 20-29 age group, which a surge in gatherings, parties, restaurant and church attendances was seen to be exacerbating.

Now the Trump fundraiser is being treated as a potential "superspreader". It is unclear whether Donald Trump caught the coronavirus directly from senior counselor Hope Hicks, who had traveled with him on 29 September for the debate against the Democrat party's presidential nominee Joe Biden in Cleveland.

New Jersey Gov. Phil Murphy said at a press briefing on Friday afternoon that everyone who was “in and around the Bedminster event” was being urged to take precautions, including “self-quarantining and ultimately getting tested.”

When asked whether social distancing guidelines had been violated at the fundraiser, Murphy was cited as saying:

“I can’t rule anything in or out right now. It’s too early to tell.”

Attendees of the fundraiser have been sent emails to inform them of Trump’s diagnosis and requiring them to contact their "medical provider if you or any of your loved ones is ill or develops a fever, shortness of breath, or other respiratory symptoms.”

According to two guests at the fundraiser, cited by POLITICO, most of it took place outdoors, with many in the crowd wearing masks and adhering to social distancing rules.

A smaller part of the fundraiser, for donors who paid $250,000, was held indoors, with 19 people sitting at a table with the President for between 45 minutes and an hour, according to a video by Republican donor Dr. Richard Roberts, published by a New Jersey local news outlet, the Lakewood Scoop.

As for their impression of the US President on that day, John Sette, the former Republican chair of Morris County, was quoted as saying:

Sette added that Trump maintained a distance of about 50 feet from people in the gathering. Food was reportedly served at stations around the grounds by staff positioned behind plexiglass.

However, according to the outlet, since-deleted social media posts by another person who attended the event suggested most in the crowd did not wear a mask.

Other media accounts cited anonymous people in attendance as having remarked that Donald Trump seemed “lethargic” and “not himself” during the fundraiser.

As speculations circulate regarding where Trump might have caught the virus, a video emerged on Friday of Republican Senator Mike Lee of Utah, holding his mask in his hand while hugging people attending an event on 26 September in the Rose Garden of the White House.

The scene in the Rose Garden as Trump announces his next Supreme Court pick. pic.twitter.com/uVqp4w0nJf

​According to footage of the event, almost no one was wearing a mask, with Judge Barrett’s colleague, the president of Notre Dame Reverend John Jenkins also testing positive since then.

In an email to students, faculty, and staff, he subsequently wrote:

“I regret my error of judgment in not wearing a mask during the ceremony and by shaking hands with a number of people in the Rose Garden.”

According to CNN, at one point during the event at the Rose Garden, Health Secretary Alex Azar was seen putting on a mask, while Attorney General William Barr and Dr Scott Atlas, were also seen without masks and shaking hands with people.

As all Trump campaign events are to be moved to a virtual format or temporarily postponed, it's likely that many of his duties will be handed over to Vice-President Mike Pence during this time.

Video: Trump Thanks Supporters for Well Wishes in First Statement Since COVID-19 Diagnosis

Trump Says 'Doing Well', Tweets 'Thanks' to Everybody