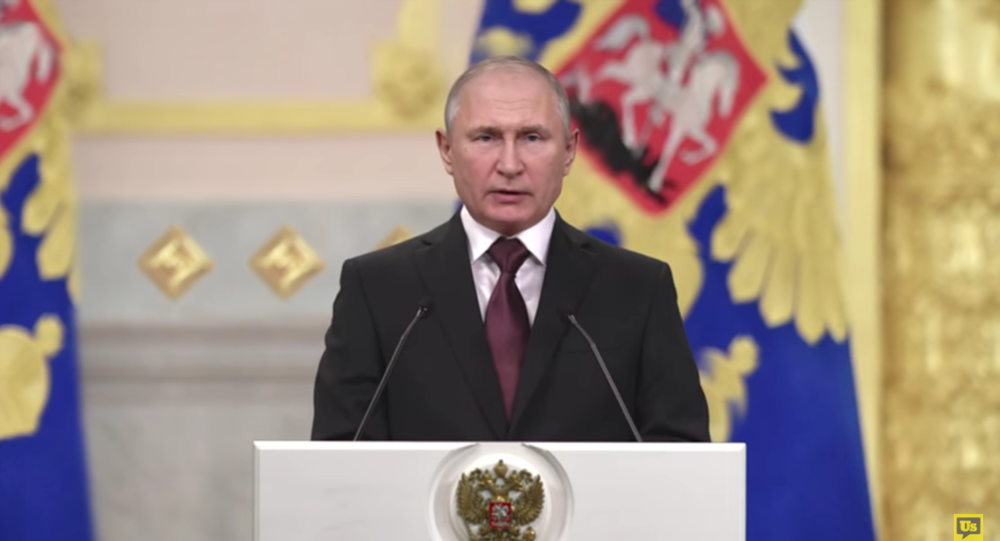 ‘You’re Doing It to Yourselves’: Deepfake US Election Ads Featuring Putin, Kim Pulled From Websites

A series of ads featuring digital likenesses of Russian President Vladimir Putin and North Korean leader Kim Jong Un purporting to urge Americans to “save the election” have been pulled from various websites.

An ad campaign by RepresentUs, a US nonprofit group that pushes anti-corruption measures and supports lobbying overhaul, has been pulled from several social media websites over fears it could deceive the public. The ads feature two foreign leaders commonly held in American politics to be dictators as well as attempting to subvert the US electoral process: Putin and Kim - or rather, digital recreations of the two world leaders.

"America, you blame me for interfering with your democracy, but I don't have to. You are doing it to yourselves," a digital Putin says in one video, standing behind a lectern bearing the Russian double-eagle coat of arms. "Polling stations are closing, you don't know who to trust, you are divided. There are strings we can pull, but we don't have to. You are pulling them for us."

In another video, a digitally recreated Kim tells viewers in a confusingly Spanish-sounding accent: “Democracy is a fragile thing, more fragile than you want to believe. If the election fails, there is no democracy. I don’t have to do anything. You’re doing it to yourselves. The people are divided. Your voting districts are manipulated. Voting locations are closing, so millions cant vote.”

“It’s not hard for democracy to collapse. All you have to do is nothing,” the ersatz Kim continues, smirking.

“Democracy lives or dies with you,” the ad says at the conclusion of the fake speech. “This footage is not real, but the threat is.”

However, the videos only got limited attention before being pulled from purchased ad time by several websites, including YouTube, and several TV networks, such as CNN, Fox News and MSNBC, according to The Hill.

"Our policies are meant to keep advertisers from running ads that are fundamentally edited to distort reality (like deepfakes, or photoshopped images)," Google spokesperson Charlotte Smith told the publication. "We removed this ad in accordance with this policy."

However, some celebrities have still hopped behind the campaign, including American actress Amy Schumer and Australian singer Sia, both of whom tweeted about it on Tuesday.

In a Tuesday statement, RepresentUs co-founder and President Joshua Graham Lynn said, "For decades, America has been gerrymandered, votes have been suppressed and voters purged, money has taken over our political system.”

"In 2020, we're seeing it all come home to roost. By featuring two leaders who have a vested interest in the collapse of our democratic system, we are putting the American people face-to-face with just how fragile our democracy really is. We hope it inspires Americans to come together to fight for this one issue that unites us all,” Lynn continued.

"Deepfakes are an entirely new kind of threat to democracy and the integrity of the media. This ad exposes the threat for all to see,” RepresentUs co-founder and CEO Josh Silver also said in the release.

While the anti-Trump sections of the US intelligence community and think tank apparatus that help shape US policies have long maintained, against verifiable proof and common sense, that Russia ordered interference with the 2016 US presidential election in order to get Donald Trump elected president, accusations about attempts on the 2020 election have been few and far between. Some much publicized reports based on what Grayzone reporter Ben Norton called “comically thin evidence” have attempted to point fingers at obscure websites like PeaceData, which Norton demonstrated is more credibly tied to the Pentagon, not the Kremlin.

Periodic reports about plans by the Democratic People’s Republic of Korea (DPRK) to attempt to interfere in the November 3 election have also appeared in US media, but again, little real, material evidence has been presented. In December 2019, Japan’s Public Security Intelligence Agency issued a warning that Pyongyang could try to interfere, and in June, similar comments by an American academic turned into a series of media reports claiming the same.

"I fully expect North Korea to test its own capabilities to see what it can get away with by hacking into the US election system,” Sung Yoon Lee, the Kim Koo-Korea Foundation professor in Korean Studies at the Fletcher School of Law and Diplomacy at Tufts University, told Fox News on June 17. “North Korea's cyber abilities are simply one of the best in the world; it would be surprising if North Korea did not test its abilities during the election."