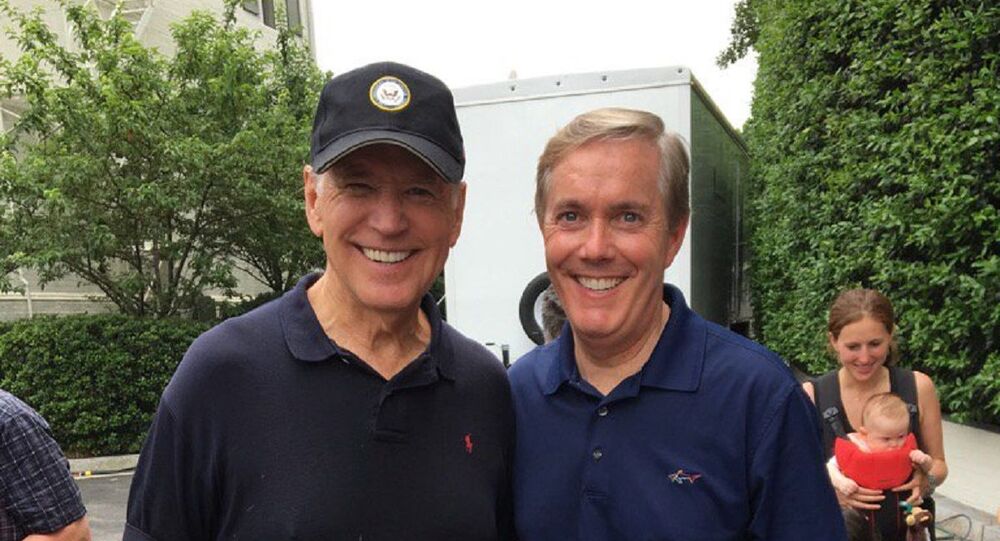 More than 73 million viewers tuned in to the first presidential debate between Donald Trump and his Democrat rival, Joe Biden, on Tuesday night. The debate, where issues ranging from the coronavirus to taxes to the environment and the recent civil unrest across US cities, were discussed, was criticised for degenerating into a schoolyard spat.

The Trump campaign is concerned that C-SPAN presenter Steve Scully may unfairly attempt to silence the president when he faces off with former Vice-President Joe Biden in Miami, Florida two weeks from now.

In a series of tweets and retweets late Thursday, the Trump campaign’s official twitter account blasted the Commission on Presidential Debates for trying to give Scully “control of @realDonaldTrump’s mic at the next debate” October 15, accompanying the post with an old tweet of Scully posing with the then Vice-President Biden at a ‘Biden Beach Bash’ four years ago.

This is the guy @debates wants in control of @realDonaldTrump's mic at the next debate. https://t.co/qlUQ9fp44g

Scully, host of C-SPAN’s Washington Journal, reportedly served as an intern for Biden in the 1978 while Biden was a senator for Delaware. He also served as an intern with Republican Pennsylvania Senator John Heinz III and in 1980 joined Democrat Senator Ted Kennedy’s presidential campaign.

During the 2016 Republican primaries, Scully retweeted an op-ed by political commentator and ‘Never Trump’ conservative David Brooks, quipping “No, Not Trump, Not Ever” along with a link to the piece.

Dan Gainor, vice-president of the not-for-profit Media Research Center based in Reston, Virginia, decried the move to pick Scully as moderator. “How is this even possible?” he asked Fox News. “When they picked the moderator did they try to ensure that it would be biased to benefit Biden? This is the equivalent of giving the Democrats home-field advantage,” Gainor said.

Scully interviewed Trump in July 2019, asking him questions on a range of topics, from China to his typical workday and personal life. The host was praised for his “fair,” “unbiased” and non-confrontational approach online.

Republicans have criticised Chris Wallace, the Fox News host and moderator of the first debate which took place on Tuesday. Texas Senator Ted Cruz called the debate a “train wreck,” and claimed that “a major contributing fact was the moderator Chris Wallace, a registered Democrat, repeatedly interrupting to try to help Joe Biden.”

“The next debate is set to be moderated by a former intern to… Joe Biden. (And Ted Kennedy.) This is NUTS. And no Republican should allow this bias to continue in future elections,” Cruz suggested in a multi-tweet thread adding that debates should be moderated by well-known and outspoken conservative and liberal pundits such as Mark Levin, Chris Hayes, Rush Limbaugh or Rachel Maddow.

2/x This is NUTS. And no Republican should allow this bias to continue in future elections.

(1) GOP primary debates should be moderated by people who actually vote in a GOP primary. (Not Dem journalists who want GOP to lose.)

Democratic-leaning media have dismissed Republicans’ concerns, suggesting Scully’s work for Biden was coincidental, and required for college credit during his studies at American University. As for the photo of Scully and Biden together, The Daily Beast suggested that “equally jolly photos exist” of Scully living it up with Republicans, including former President George W. Bush.

Trump announced late Thursday that he and First Lady Melania tested positive for coronavirus, with the White House announcing that it has consequently removed a Florida campaign trip slated for Friday from the President's schedule. It remains unclear at this point whether the President's illness will affect the 15 October debate or its format in any way.