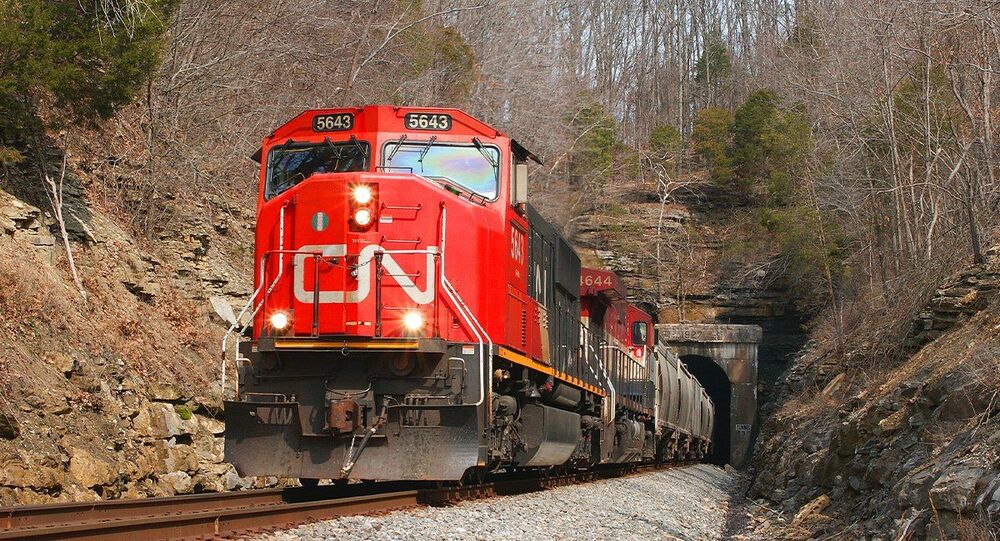 US President Donald Trump has authorized the Alaska - Alberta Railway Development Corporation (A2A Rail) to "construct, connect operate and maintain railway facilities at the international boundary between the United States and Canada," according to his Tuesday presidential permit.

"Permission is hereby granted to [A2A Rail] to construct, connect, operate, and maintain certain railway Border facilities, as described herein, at the international border of the United States and Canada at Southeast Fairbanks Census Area, Alaska, in the Ladue River Valley at 63°15'N and 141°W, approximately 45 miles due north over land from the Alcan Border Crossing on Alaska Route 2 (also known as the Alaska Highway) and approximately 60 miles due east over land from the town of Tok, Alaska," read Trump's presidential permit issued by the White House Tuesday evening.

#Trump to approve $22B railway between #Alaska and #Alberta, #Canada pic.twitter.com/kwS0ew8lOl

The document noted the "construction, connection and operation" of the facilities "shall be subject to inspection by the representatives of appropriate Federal, State, and local agencies."

Trump took to Twitter over the weekend and tweeted his intent to grant approval to the $22 billion railway connecting Alaska and Alberta.

Based on the strong recommendation of @SenDanSullivan and @repdonyoung of the Great State of Alaska, it is my honor to inform you that I will be issuing a Presidential Permit for the A2A Cross-Border Rail between Alaska & Canada. Congratulations to the people of Alaska & Canada!

"The Government of Alberta is glad to see the approval of the A2A rail project in the United States," said Christine Myatt, spokesperson for Alberta Premier Jason Kenney, in an emailed statement to the Canadian Broadcasting Corporation (CBC).

The outlet noted the railway will be capable of carrying cargo ranging from oil to passengers.

"You can diversify a little bit … you don't just have to haul crude oil. You can hold a lot of other commodities, too, as long as there's a market for it. So market access is big, not just for crude oil," said Kent Fellows, an economist at the University of Calgary's School of Public Policy, to the CBC.

A2A Rail announced in early July that it had commissioned Washington, DC, engineering firm HDR "to immediately commence with detailed land surveying along the Alberta segment of the railway’s proposed route."