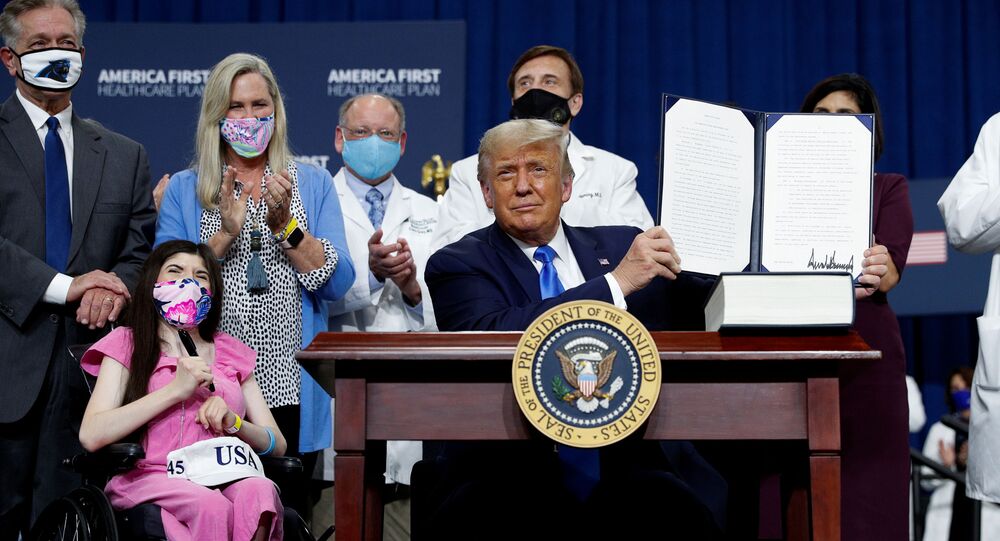 On 24 September, Donald Trump signed an executive order on an America-First Healthcare Plan aimed at improving the nation's medical system. US analysts and healthcare experts have discussed the timing of the president's executive order and the future of Obamacare.

Simultaneously, the US president is seeking to undo the Obama-era Affordable Care Act (ACA): on 10 November, the US Supreme Court is due to hear the legal challenge to the ACA, commonly known as Obamacare.

"The administration is currently arguing before the Supreme Court that the ACA should be invalidated. If it succeeds this would leave millions of people without coverage and many more millions without certain coverage for pre-existing conditions", argues Professor Timothy Jost, health care policy expert at Washington & Lee University’s law school.

Commenting on Trump's moves to substantially slash the cost of drugs and health services, Jost notes that "those actions are largely delayed until after the election", suggesting that they are largely aimed to improve the president's election odds.

The future of Obamacare is hanging in the balance as "the order also comes at the transition of Supreme Court Justice Ruth Bader Ginsburg last week, which adds uncertainty for the ACA", according to Quardricos Driskell, a professor of politics with George Washington University. He notes that this is the latest bid to "strike down the entire law".

The GOP has waged an unremitting war upon Obamacare for ten years, says William Stroock, a political analyst and author.

He recollects that earlier came two Supreme Court challenges and "the repeal of the Obamacare mandate that required Americans to carry insurance or pay a fine".

On 22 December 2017, Trump signed into law the repeal of the individual mandate penalty under the ACA for not purchasing health insurance coverage even if they couldn't afford one.

As a third challenge to the constitutionality of Obamacare heads to the Supreme Court, Trump is laying the groundwork for a replacement should the entire law be struck down, Stroock explains.

The right-wing of the American political spectrum has repeatedly pointed to Obamacare's apparent flaws, stressing that the ACA left roughly 30 million uncovered by any health insurance plan whatsoever. The Kaiser Family Foundation's research indicated that about half of the uninsured still cannot afford to buy coverage. The entity also found that while the ACA implementation under Barack Obama cut the number of uninsured non-elderly individuals from 46.5 million in 2010 to fewer than 26.7 million in 2016, in subsequent years this figure has steadily risen, reaching 27.9 million in 2018.

The Republicans also argue that the ACA failed to provide protections for all Americans' pre-existing healthcare plans, stressing that less than 6 percent of the population got access to this feature. The GOP and the Trump administration also point out that "the average insurance premium in the individual market more than doubled from 2013 to 2017", making it "unaffordable" for low-income Americans.

Touching upon the fears that people with preconditions currently provided with Medicaid extension could lose their coverage in case the ACA is struck down, GOP senators say that these concerns are groundless: "What they’re talking about is what they think politically resonates, but 100 out of 100 senators agree we’re going to protect pre-existing conditions regardless of what happens with Obamacare", Republican Senator Ted Cruz said on CNBC's “Squawk Box” on Monday.

The GOP is not alone in criticising Obamacare: over 40% of Americans are apparently dissatisfied with the programme. According to the 22 September Kaiser Family Foundation poll, 49% of Americans currently support the ACA, while 42% of respondents have a negative opinion about the Obama-era law.

However, Trump administration officials acknowledge that the president's executive orders concerning healthcare are just the first steps on the path to change the US healthcare system: "With four more years… President Trump will continue advancing policies that improve the health and well-being of all Americans", Dr. Benjamin S. Carson, secretary of the US Department of Housing and Urban Development, wrote in his recent opinion piece for Fox News.

Why the US Healthcare System Won’t Stop the Coronavirus