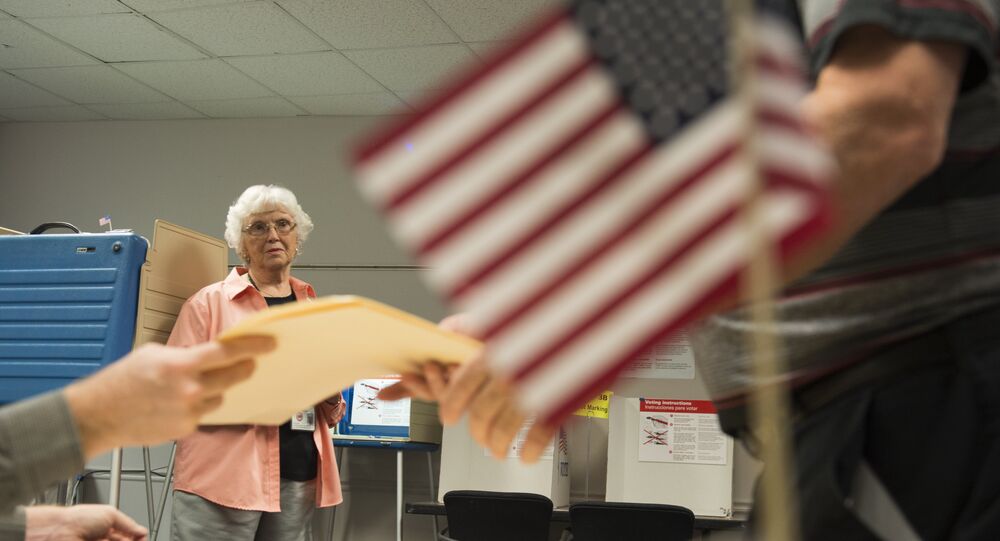 Discarded mail-in ballots found in an outside dumpster in Luzerne County of the swing state of Pennsylvania prompted deep concerns in the US Justice Department, which raised the alarm over the county elections office's practices. US academics have discussed the pros and cons of voting by mail.

On 24 September, the DoJ sent a letter to Shelby Watchilla, the director of elections of Luzerne County Bureau of Elections, informing her about an inquiry over potential issues with mail-in voting. The document revealed that nine discarded military ballots were found in the county with seven of them being cast for presidential candidate Donald Trump. Although on Friday, Luzerne County officials blamed the incident on a temporary independent contractor, FBI investigators found more troubling practices associated with the processing of received ballots. For instance, it has been revealed "that all or nearly all envelopes received in the elections office were opened as a matter of course", the letter revealed.

Touching upon the issue of discarded ballots, Donald Trump, who has long cast doubt on the practice of mail-in voting, said that he is “not sure” that the presidential election would be “honest”: "We want to make sure the election is honest and I’m not sure that it can be", he told reporters at the White House. "I don’t know that it can be with this whole situation — unsolicited ballots, they are unsolicited, millions being sent to everybody."

Mail-In Ballots: What Can Cast Doubt on the 2020 Election?

"The incident in Pennsylvania was a result of a state Supreme Court ruling that was intended to support the Trump administration in requiring that 'naked ballots' without secrecy envelopes be discarded", suggests Dr. Melinda Kovacs, Associate Professor of Political Science at Missouri Western State University, pointing out that Luzerne County, where this occurred, is under Republican control.

The concern of a potential voting fraud associated with mail-in ballots is somewhat exaggerated, according to her. However, she admits that there is one thing that could cast doubt on the 2020 election, namely if there are attempts at not counting every ballot.

"The seven of the nine discarded ballots that were for President Trump ought to be added to the nationwide total of the votes the president received, if and only if all mail-in ballots are counted, if the count is not stopped in any location until every last one is accounted for, regardless of how long the count has to go on for", Kovacs stresses.

Furthermore, mail-in voting appears to be a safe alternative to in-person voting amid the coronavirus pandemic. There will be a dramatic increase in voting by mail due to the fears of getting infected, according to him. To date, over 200,000 COVID-related deaths have been registered in the country.

Conservatives are Ringing the Alarm Bell

However, constitutional lawyer Robert Barns does not share Sedler's optimism: "This year poses the greatest risk and exposure to an election in recent memory tainted by serious public doubts about the integrity and accuracy of the vote", he warns.

In addition to the aforementioned nine discarded ballots found in Pennsylvania, three trays of mail including absentee ballots were found last Tuesday in a ditch in Outagamie County, Wisconsin. Commenting on the matter, the US Postal Service stated that they are aware of the incident and that the investigation into the discarded mail had already been launched.

The problem with absentee and mail-in ballots does not end here, as on Sunday conservative group Project Veritas released alleged evidence of "ballot harvesting" in Minneapolis. A video shared by the group featured a man who was bragging about collecting hundreds of absentee ballots for then Minneapolis City Council candidate Jamal Osman.

While the case cited by Project Veritas has yet to be confirmed, the ballot harvesting problem was raised even ahead of the pandemic by The Federalist in 2018. With this practice, intermediaries collect mail ballots for other voters and deliver them to polling officials, which, according to the media, creates "opportunities for mischief". In some states this practice does not contradict the law: in 2016, an amendment to California's vote by mail legislation allowed any person to collect and return ballots, which prompted criticism from the state's GOP. Thus, in Orange County alone over 250,000 harvested ballots were dropped off on Election Day in November 2018, according to Fred Whitaker, chairman of the county Republican Party.

In July 2020, the Heritage Foundation released a legal memo outlining major vulnerabilities of absentee and mail-in ballots. Among other issues, the conservative think tank highlighted that though all 50 states have bans on electioneering in and near polling places, "there are no prohibitions on electioneering in voters’ homes – which is what happens all too often with absentee ballots and voting by mail", making voters vulnerable to intimidation and unlawful "assistance". Besides this, absentee ballots could be misdirected, stolen, forged, and altered, the legal memo underscored.

In early September, Attorney General William Barr reiterated concerns surrounding an expanded mail-in voting this year, warning that it could open the door to election fraud: "People trying to change the rules to this, to this methodology - which, as a matter of logic, is very open to fraud and coercion - is reckless and dangerous and people are playing with fire", Barr said on CNN's "The Situation Room with Wolf Blitzer".

In light of the emerging reports, the role of the Supreme Court has taken on a new significance, according to Robert Barns.

"If the Supreme Court does not step in and clean it up, this election may see half the country doubting the legitimacy of the winner, no matter who the winner is", he stresses.

Last Wednesday, President Trump noted that he expects that the upcoming election may end in the Supreme Court: "I think it's very important that we have nine justices", the president emphasised. "I think it's better if you go before the election, because I think this scam that the Democrats are pulling — it's a scam — the scam will be before the United States Supreme Court".