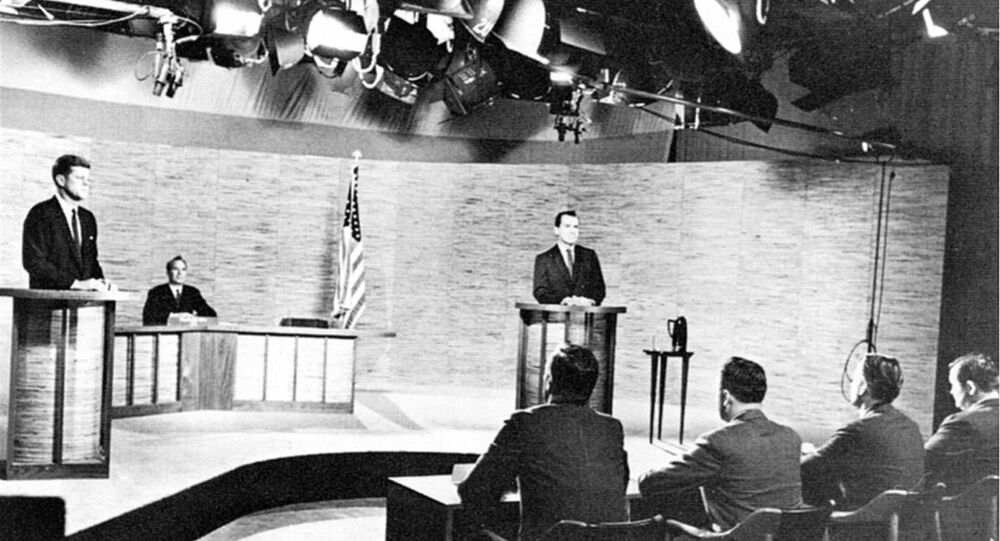 Will Trump Versus Biden Match Up to Some of the Feisty Presidential Debates of the Past?

US President Donald Trump and former Vice President Joe Biden are set for the first televised presidential debate of 2020 on Tuesday night. The debate has been central to the campaign for the last 60 years and has produced some memorable moments.

The New York Times has claimed Trump paid only $750 in federal income taxes in both 2016 and 2017 and paid nothing in many of the previous years - an allegation which the president immediately referred to as “fake news”.

I'm not looking to punish anyone, but it's about time the super-wealthy and corporate America start paying their fair share.

​Biden is expected to go for the jugular on the tax issue in the first debate, while Trump may focus on the former vice president’s health and also on his son, Hunter’s business dealings in the Ukraine.

But what have been the most memorable moments of past debates?

The 1960 clash between John F. Kennedy and Richard Nixon was not actually the first televised election campaign.

In 1956 when Democratic candidate Adlai Stevenson was challenging Republican president Dwight Eisenhower neither man appeared in the debate but instead two surrogates - former First Lady Eleanor Roosevelt for the Democrats and Maine senator Margaret Chase Smith for the Republicans.

Four years later Nixon - who had been Eisenhower’s vice president - stepped up to the plate against the young Massachusetts senator.

There were four debates in total and the first garnered an audience of 66 million.

Nixon, who refused the offer of make-up, looked sweaty, pale and nervous in comparison to the handsome, tanned and relaxed Kennedy. Ironically radio listeners believed Nixon had won the debate but TV viewers were in no doubt that Kennedy was the man they wanted to be the next president.

Nixon’s TV performances improved in later years and he spent five years in the White House before resigning in August 1974, overwhelmed by the Watergate scandal.

The second debate’s most memorable moment was  when President Ford insisted "there is no Soviet domination of Eastern Europe."

In the middle of the Cold War and with the stark evidence of the Warsaw Pact, it was a huge gaffe and appeared to highlight Ford’s ignorance of foreign affairs, an area he was notoriously weak on.

But it did not appear to faze the electorate and after the debate Ford actually closed Carter’s 11 point lead in the polls to two points.

In the end Ford lost the election by just 57 electoral college votes and the peanut farmer moved into the White House.

Carter endured a fairly torrid time in the White House, especially after the Iranian revolution overthrew the Shah, a key US ally in the Gulf, and ushered in a hardline Islamic regime.

The Carter administration failed to solve the Tehran embassy crisis and in election year the Republicans anointed Ronald Reagan, a former Hollywood actor and California governor, as their candidate.

Reagan came over as amiable and folksy, but had a good grip of policy detail and was able to highlight how Carter’s administration had worsened the reputation of the US only five years after the end of the Vietnam War.

The most memorable catchphrase of the debates was Reagan’s “there you go again” put-down, which he used effectively to make out that Carter was all talk and no action.

The phrase entered the political lexicon and helped Reagan to a landslide victory in November 1980.

When Reagan exited stage left in 1988 he was replaced by his Vice President George H. W. Bush , who retained much of his domestic and foreign policy agenda but had none of the folksy charm of Reagan.

In the 1992 election Bush was up against a guy who oozed folksy charm - Arkansas Governor Bill Clinton.

Bush came from a wealthy family and had an Ivy League education and in one of the debates a question from the audience about how the National Debt had affected him personally had him struggling for an answer.

As he prattled he made the mistake of glancing at his watch.

For many it symbolised that his time was up and he was swept away by Clinton in that year’s election.

One of Bush’s sons, George W., won the race to be the Republican candidate in 2000 and was up against Clinton’s Vice President, Al Gore.

Bush - who as President was dubbed Dubya and lampooned as being dopey - came across as clubbable, humble and a man of the people while Gore appeared standoffish, smug and a little arrogant.

In the first debated Gore sighed ostentatiously and pulled a face as Bush was speaking.

The second debate saw a bizarre moment when Gore appeared to invade Bush’s personal space on the stage and Bush nodded at him as if to say: “Are you Ok, buddy?”

It may or may not have clinched the election but in the event Bush won it, due to the famous Hanging Chads of Florida.

In the 2016 presidential campaign Trump, whose previous TV appearances had been on the reality show The Apprentice, was up against Bill Clinton’s wife, the former Secretary of State Hillary.

It was clear from the outset that there was no love lost between the pair.

The gloves really came off in the second debate when Trump called her “the devil” and threatened to jail her over her alleged abuse of emails.

Clinton responded: “With prior Republican nominees for president, I disagreed with them. Politics, policies, principles…but I never questioned their fitness to serve. Donald Trump is different.”

In the final debate Trump refused to rule out the possibility he would reject the outcome of the election if he felt it had been rigged.

Election night 2016 kept everyone in suspense but in the end Trump was the winner.