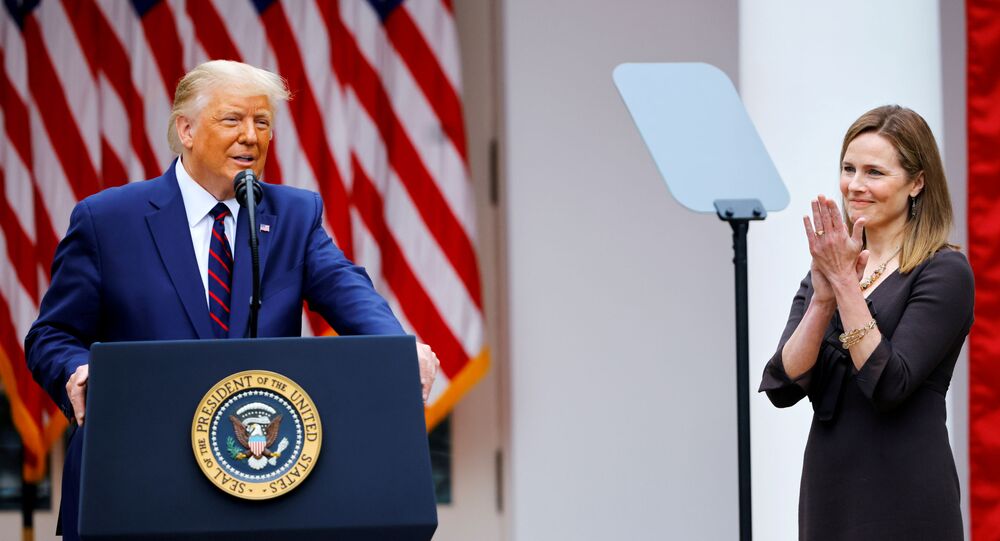 According to a Morning Consult/Politico poll, 37 percent of respondents said the Senate should vote to confirm Barrett to fill Ginsburg’s seat, while 34 percent felt the opposite.

At least 40 percent of respondents said that the Senate should only vote on confirming Barrett if Trump wins in November presidential election, while 39 percent said the vote should take place as soon as possible, regardless of the possible election results, the poll showed.

After Trump announced Barrett's nomination on Saturday, US Democratic presidential candidate Joe Biden released a statement urging the Senate not to approve Trump's nomination before the November vote.

© REUTERS / CARLOS BARRIA
U.S. Court of Appeals for the Seventh Circuit Judge Amy Coney Barrett reacts as U.S President Donald Trump holds an event to announce her as his nominee to fill the Supreme Court seat left vacant by the death of Justice Ruth Bader Ginsburg, who died on September 18, at the White House in Washington, U.S., September 26, 2020

Earlier this month, US Supreme Court Justice Ruth Bader Ginsburg died of complications from metastatic pancreatic cancer at her home in Washington. Before her passing, the US Supreme Court was already stacked with a 5-4 conservative majority.

The Democrats have been highly critical of Trump’s intention to fill the vacant Supreme Court seat just weeks before the presidential election.

Senate Majority Leader Mitch McConnell said earlier this month that the Senate would vote on Trump’s pick to replace Ginsburg regardless of criticism by the Democrats. The Republicans currently hold a 53-47 majority in the Senate.