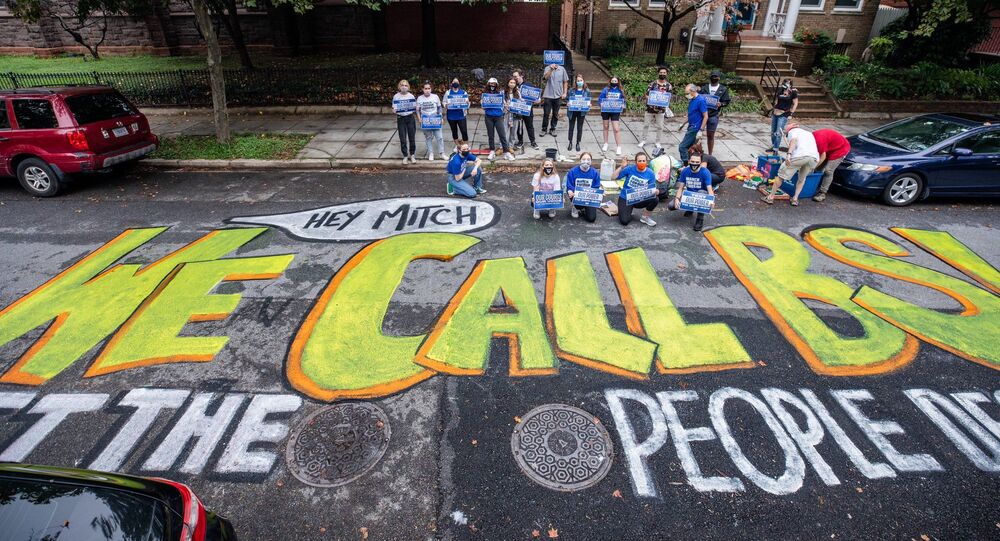 On 18 September, the day US Supreme Court Justice Ruth Bader Ginsburg died, Senate Majority Leader Mitch McConnell said that the Senate would vote on President Trump’s pick to replace her, despite that it is an election year – an argument he made in 2016 during the Obama era. On Saturday, Trump announced Amy Coney Barrett as his nominee.

Activists from the March For Our Lives movement, a group advocating gun control, protested on Saturday US Senate Majority Leader Mitch McConnell’s plans to support President Donald Trump’s nomination of a Supreme Court judge in an election year.

With a giant mural in front of McConnell’s residence in Washington DC, the activists called on the Republican Senator to leave the decision of choosing a replacement for late Supreme Court Justice Ruth Bader Ginsburg, who died on 18 September, for the American people.

Hey @senatemajldr, look outside your window. 😘

David Hogg, a co-founder of the movement, called on McConnell to “honor” Ginsburg’s last wish not to be replaced until a new president was sworn into office.

Hogg tweeted a selfie with the mural as it was being painted by March For Our Lives activists in cooperation with Demand Justice, which describes itself as “a movement dedicated to fighting Donald Trump's takeover of our courts”.

The March For Our Lives group was founded in 2018 by survivors of gun violence in the wake of the Marjory Stoneman Douglas High School mass shooting in Parkland, Florida, that saw 17 students and faculty shot and killed.

On Sunday, people gathered outside the Supreme Court building in Washington DC, to demand that US Senators wait until after the inauguration of a new president to confirm a new justice, as the country’s general election is set to take place in less than six weeks, on 3 November.

On Saturday, during a speech at the White House, Trump announced Amy Coney Barrett, a highly religious conservative, as his Supreme Court nominee, to fill the vacancy left by Ginsburg after she died of complications from metastatic pancreatic cancer, at the age of 87, at her home in Washington.

Senate Majority Leader Mitch McConnell said on 18 September, the day Ginsburg passed away, that the Senate would vote on Trump’s pick to replace her. McConnell’s support for Trump faced wide criticism, as it contradicts the Republican Senator’s previous stance on replacing a Supreme Court judge in an election year.

Although it was nine months before that year’s presidential election, McConnell at that time declared that the replacement should wait until after the election as “the American people should have a voice” in the Supreme Court Justice selection.

“The American people should have a voice in the selection of their next Supreme Court Justice. Therefore, this vacancy should not be filled until we have a new president,” McConnell said in a statement on 13 February 2016, the day Scalia died.

'No Confirmation Until Inauguration' Rally Outside Supreme Court in Washington, DC - Video