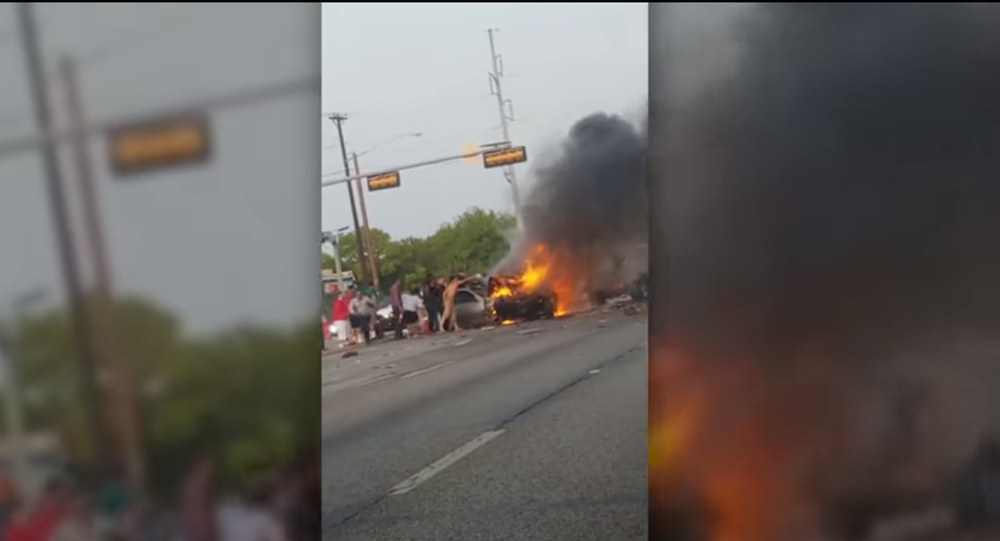 Video: Police Officers Team Up With Bypassers to Get Man Out of Burning Car

Police in Dallas, Texas, responded to reports of an incident involving multiple vehicles on Scyene Road on Saturday. One vehicle caught fire, emitting clouds of smoke, with a man trapped inside.

Police officers from Dallas' Southeast Patrol Division, together with bystanders on the street, saved the life of an unconscious man trapped inside a burning car.

Bodycam video shows officers rushing to assist community members trying to pull the man out of the car. The officers, Jonathan Calder, Jonathan Martinez, and Israel Banales, arrived at the scene of the incident and immediately started a rescue operation.

"The officers began smashing in the window with community members while the fire grew in the front of the car. Fighting the smoke and the heat, they didn’t give up. They were able to get the individual out of the car so that Dallas Fire Rescue could treat him and get him to the hospital", a police statement said.

While Banales used a fire extinguisher to contain the flames, the other patrol officers teamed with community members to help drag the man out of the car.

“It’s my job. I know everybody I work with in law enforcement would have done the exact same thing that I did,” said Calder.

According to police, the rescued man suffered major burns and was taken to hospital to receive treatment. The police officers who assisted in rescuing the man credited community members, noting that without their help it would have been impossible to pull the man out of the car.

“Three officers alone pulling on this guy wouldn’t have made it,” Martinez revealed. “It was the combination of the citizens putting their lives on the line, getting closer to that car, helping pull the gentleman out of the car, using water, using resources that they had.”

It is unclear what caused the incident, but the police said an investigation has been launched.