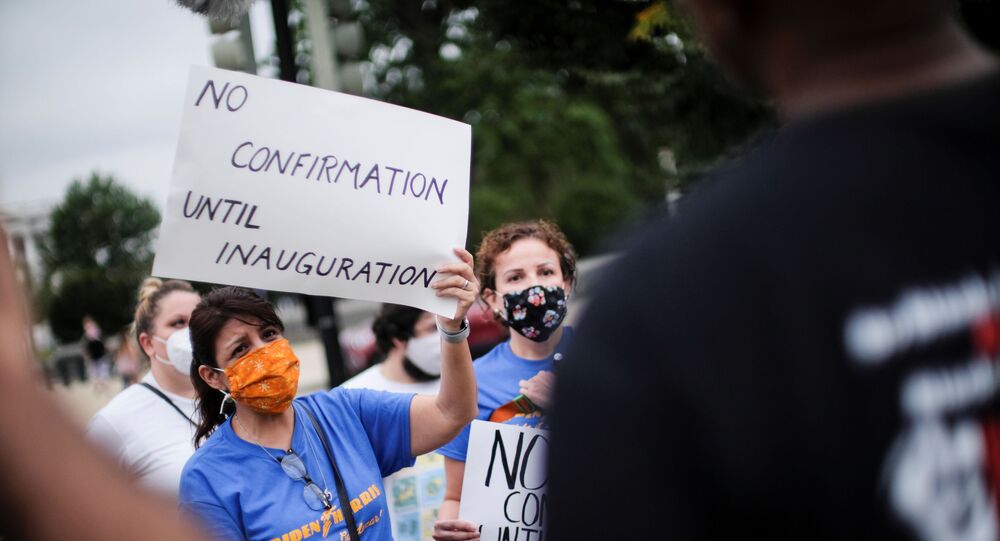 The intention by US President Donald Trump to fill in the vacancy in the Supreme Court opened after the death of Justice Ruth Bader Ginsburg last week drew harsh condemnation from Democrats, who insist that the vacancy should not be filled until after the US presidential election.

The announcement of Amy Coney Barrett as Trump's official Supreme Court nominee caused waves among many in the Democratic party who immediately castigated the nomination.

Democrats lashed out in Twitter tirades, claiming that by picking Barrett, Trump intends to "destroy" the Affordable Care Act and Roe v. Wade - a Supreme Court decision on a liberty of a woman to decide for herself to have an abortion.

Democratic presidential candidate Joe Biden was the first to criticise the Barrett nomination, urging the US Senate not to act "until after the American people select their next president and the next Congress".

Supreme Court decisions affect our everyday lives, and the Constitution was designed to give voters a voice on who makes those decisions.

The Senate shouldn't act until after the American people select their next president and the next Congress.

Americans deserve to be heard.

​His running mate Kamala Harris asserted that Trump's selection "would move the court further right for a generation & harm millions of Americans", expressing her opposition to the Barrett nomination.

Trump’s hand-picked successor to Justice Ginsburg’s seat makes it clear: they intend to destroy the Affordable Care Act & overturn Roe. This selection would move the court further right for a generation & harm millions of Americans.

"Trump is exploiting this vacancy against the clear and overwhelming will of the American people, as he dismantles the pillars of health and economic security in America", Pelosi said in her statetement regarding the nomination.

Elizabeth Warren posted a video message, noting that Trump's pick was made to "swing the Court in his favor" when he, Warren suggested, "loses this election". She was apparently referring to the president's recent threat that the November election could "end up in the Supreme Court".

Amy Coney Barrett will work to gut Roe v. Wade and the ACA, taking away health care coverage from millions of Americans—including those with pre-existing conditions. And make no mistake: Trump is counting on her to swing the Supreme Court in his favor when he loses this election. pic.twitter.com/cTpOHgintZ

​Amy Klobuchar, a Minnesota Senator, joined her fellow Democrats in the outcry against the Barrett nomination.

With Americans already voting in droves, the President wants to jam through a Court nominee who has voiced serious opposition to the legality of the Affordable Care Act. Strip away healthcare in the middle of a pandemic?

RBG always fought for what was right - I’ll do the same.

​Bernie Sanders, one of the front-runners in the Democratic race for presidential candidacy, rolled out a list of what he believes the Senate should approve - including Barrett's nomination to the opposite list.

What the Senate should approve:

-$600/week for 30 million unemployed workers
-$2,000 a month for working class Americans
-An emergency expansion of Medicare to all

What the Senate should not approve:

​Senate Democratic Leader Chuck Schumer labeled any Senate vote on Barrett as "a vote to eliminate health care for millions in the middle of the COVID-19 pandemic".

The American people should make no mistake:

A vote by any Senator for Judge Amy Coney Barrett is a vote to eliminate health care for millions in the middle the COVID-19 pandemic.

​Trump faces vehement criticism from the Democratic party after voicing his intention to fill the seat of Justice Ruth Bader Ginsburg, who passed away last week.

According to Democrats, Trump cannot fill the Supreme Court vacancy before the 3 November presidential vote - a claim dismissed by the GOP, members of which insist that Trump, as the incumbent president, has every right to do so.

Amy Barrett is expected to stand before the Senate Judiciary Committee starting from 12 October for her confirmation hearings, which, according to Committee Chairman Lindsey Graham, are hoped to be over by 26 October.