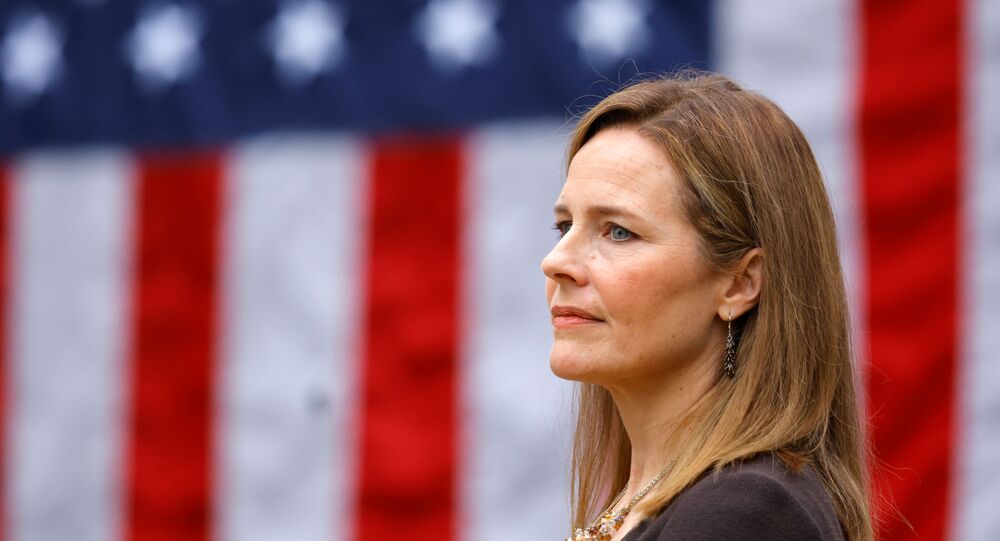 A vacancy in the US Supreme Court opened following the death of Justice Ruth Bader Ginsburg last week at the age of 87. US President Donald Trump has been eager to fill the vacancy before the presidential election, a desire met with criticism by Democrats.

"Today it is my honor to nominate one of our nation's most brilliant and gifted legal minds to the Supreme Court. She is a woman of unparalleled achievement, towering intellect, sterling credentials and unyielding loyalty to the Constitution. Judge Amy Coney Barrett", the president announced, with Barrett standing by his side in the Rose Garden.

In her response, Barrett thanked the president for picking her, also praising Justice Ruth Bader Ginsburg.

"She not only broke glass ceilings, she smashed them,” Barrett said of Ginsburg.

Democratic candidate Joe Biden immediately reacted to the announcement, urging the Senate not to confirm any candidacy for the Supreme Court until the November 3 presidential election.

"The American people know the US Supreme Court decisions affect their everyday lives. The United States Constitution was designed to give the voters one chance to have their voice heard on who serves on the Court. That moment is now and their voice should be heard. The Senate should not act on this vacancy until after the American people select their next president and the next Congress", Biden said in his statement.

Today, President Trump nominated Judge Amy Coney Barrett to the Supreme Court — a jurist with a written track record of disagreeing with the Court’s decision to uphold the Affordable Care Act.

Vote like your health care is on the ballot — because it is. https://t.co/TDBQOVLP4K

​Prior to the announcement, US media speculated on five possible candidates for Trump's nomination,: Judge Amy Barrett, Judge Barbara Lagoa, Judge Allison Jones Rushing and Judge Joan Larsen, while it was unclear who the fifth might have been.

Barrett was considered to be his most likely pick, as the president particularly remarked on how "tough" she was during a vetting process she underwent during confirmation hearings in 2017, when she was nominated by Trump for the Chicago-based 7th Circuit Court of Appeals.

© REUTERS / CARLOS BARRIA
U.S President Donald Trump watches U.S. Court of Appeals for the Seventh Circuit Judge Amy Coney Barrett deliver remarks as he holds an event to announce her as his nominee to fill the Supreme Court seat left vacant by the death of Justice Ruth Bader Ginsburg, who died on September 18, at the White House in Washington, U.S., September 26, 2020

She is a Roman Catholic, anti-abortion and pro-gun professional, who has criticised the decision by Chief Justice John Roberts to save the Obamacare individual mandate back in 2017. Barrett is also the 48-year-old mother of seven children, two adopted from Haiti and one with Down's syndrome.

“If confirmed, Justice Barrett will make history as the first mother of school age children to ever to serve on the US Supreme Court”, Trump stated.

Now that his Supreme Court replacement pick has been officially announced, Senate Judiciary Committee hearings will follow, after which, if Barrett passes, the Senate will vote on whether to appoint her to the Supreme Court, a job for life that cannot be termed out.

Commenting on the Senate hearings dates, Trump said that the Senate will "likely" open the hearings on 12 October, outlining that the dates are ultimately up to Senate Judiciary Committee chairman Lindsey Graham.

Earlier, The Associated Press, citing sources, said that the confirmation hearings in the Senate are expected to be held starting 12 October.

Trump predicted that Barrett would enjoy "a straightforward and prompt confirmation", praising her "unsurpassed qualifications" and touting her record as "beyond reproach".

"This should be a straightforward and prompt confirmation, it should be very easy, good luck. It’s gonna be very quick, I am sure it will be extremely non-controversial," Trump remarked at the White House.

He also pointed out that this was his "third such nomination", referring to two Supreme Court judges he nominated previously. After taking office, Trump nominated Neil Gorsuch, who was confirmed in April 2017 to replace Associate Justice Antonin Scalia, and Brett Kavanaugh in 2018, who took over the position of Associate Justice Anthony Kennedy after he announced his retirement.

Trump’s Taxes Still Hidden After SCOTUS Ruling, But for How Long?