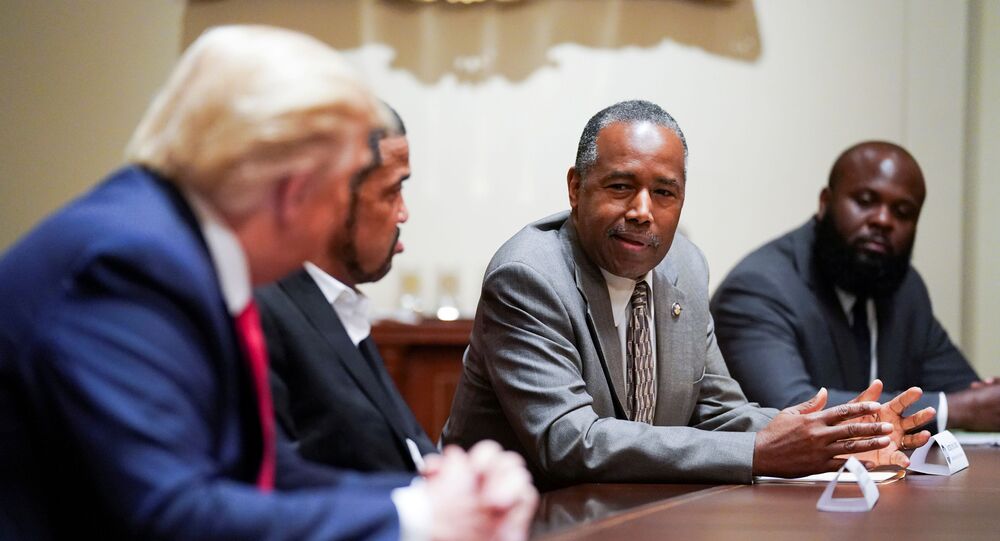 US President Donald Trump, according to polls, currently trails behind Democratic rival Joe Biden, particularly with black voters, with many accusing the president of being "racist" - something that Trump has repeatedly denied.

US President Donald Trump on Friday addressed Black voters, unveiling what he dubbed a "Platinum Plan" for the black community. He followed up his announcement by claiming that in several weeks he will win the US presidential election with a record number of black voters casting their vote for the Republican ticket.

Trump, who often praises himself as someone who has done more for black Americans than any other president, apart from Abraham Lincoln, does not enjoy wide support in the black community. Polls show that Biden has a lead with black voters, despite Trump accusing him of damaging the economy for Black Americans and joined a wave of public condemnation after Biden remarked that if African Americans support Trump, they "ain't black".

Trump's plan for bolstering black economic empowerment and access to capital begins with the line "Jobs, Jobs, Jobs", promising to "reach even greater levels of historic employment and wage growth for the black community set in 2019, so that anyone looking for a job gets one".

In August 2019, the black unemployment rate fell to 5.4 percent, but the low numbers were boosted by the coronavirus pandemic, which then soared to 13 percent. The so-called Platinum Plan envisages billions in government funding to the black business and job opportunities, along with "examining barriers" to employment, such as fees, licensing, and arrest record inaccuracies.

The plan also suggests growing minority-owned business by introducing tax cuts and additional funding, along with opening new ways for blacks in the US to access capital by "advancing lending relationships with financial institutions" and "hosting senior executives from major financial institutions on a quarterly basis".

The plan highlights that the programme would include "Affordable Care you can trust", promising price transparency, reduced costs, and the ability to choose the doctor.

"[Trump's promise is to] defend religious freedom exemptions to respect religious believers and always protect life", one of the bullet points claims, along with promises to "eliminate Long-Standing Healthcare Disparities".

Apparently one of the most on-point blocks to Trump's plan refers to the justice system, envisaging "working with police departments, community leaders and mental health professionals to install the most responsive, professional, and accountable models of policing, including diversity training and accreditation standards".

The promises come as the country is rocked with nationwide protests against police brutality and racism, with some demonstrations evolving into riots, looting, and attacks against heavily-militarized police officers. As more protests were sparked by the killing of George Floyd in police custody, many have ramped up hype around the slogan "Defund the police", calling to significantly reduce the budgets of police departments.

Trump has stated that he strongly opposes defunding police, making "Law and Order!" one of his campaign mottoes and constantly offering to send federal agency assets in the form of troops and military equipment to cities where protests have become violent.

In what appears to be a response to public outcry against racial injustice, Trump in his plan promises to make Juneteenth - a day commemorating the end of slavery in the US - a national holiday. He also suggests that he would "prosecute the KKK and antifa as terrorist organizations and make lynching a national hate crime".

Trump presented his plan during a speech in Georgia, while vowing to win the upcoming election with a record number of black supporters.

“In 39 days we’re going to win four more years of the White House, and we will do it with a record number of votes from the Black community", he said at the speech.

Many have accused Trump of racism, as he has long advocated the so-called birther conspiracy theory that falsely suggest that US President Barack Obama was not born in the US, allegedly referring to African countries as "sh**hole states", saying there are "very fine people on both sides" when commenting on the deadly right wing "Unite the Right" Charlottesville rally and suggesting that a handful of Democratic congresswomen should "go back and help fix the totally broken and crime infested places from which they came".

During his presidency, however, Trump addressed the problems of the black community, particularly with the implementation of the First Step Act, which included federal prison reforms to reduce recidivism and decrease federal inmate populations; support for historically black colleges and universities, and the creation of opportunity zones under the Tax Cuts and Jobs Act of 2017 that allow certain investments in lower income areas to have tax advantages.

Despite that, according to a recent YouGov/The Economist poll, Trump is not favoured by Black voters in the US, with 78% of respondents voicing preference to Democratic presidential candidate Joe Biden.

He, however, also did roll out several remarks that were denounced as racist and offensive, like "Well, I tell you what, if you have a problem figuring out whether you’re for me or Trump, then you ain’t black" and, while referring to former US President Barack Obama), “You got the first mainstream African American who is articulate and bright and clean and a nice-looking guy. I mean, that’s a storybook, man.”