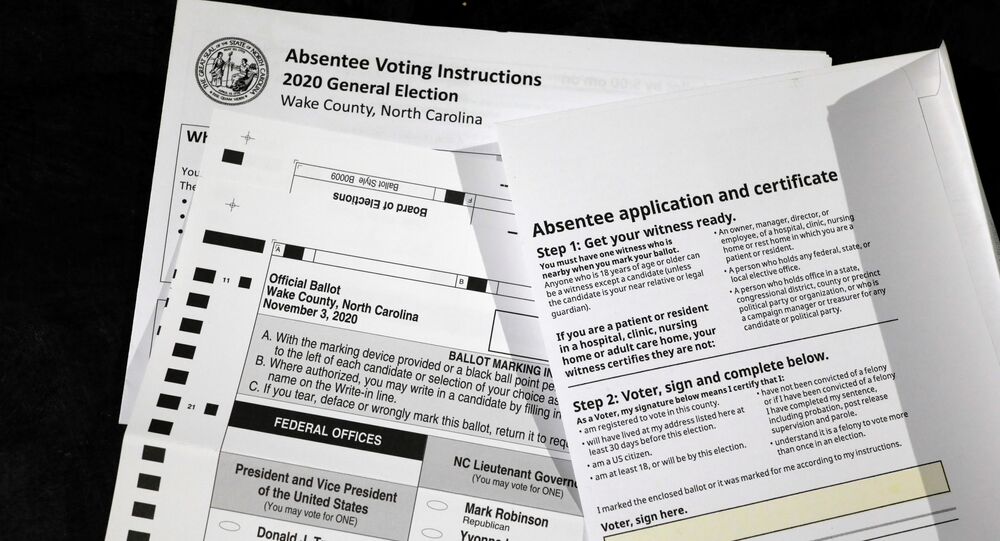 US President Donald Trump has repeatedly opposed the nationwide shift to absentee and mail-in voting proposed amid the ongoing coronavirus (COVID-19) pandemic, claiming that Democrats could win the November election via sending out millions of mail-in ballots or stealing millions of votes, in what he claims would be “the greatest scam in history”.

The US Department of Justice on Thursday announced that the Federal Bureau of Investigation (FBI) is investigating an incident of nine absentee ballots, the majority of them cast for President Donald Trump, recovered in garbage near the Pennsylvania city of Scranton.

In a Thursday press release, US Attorney David Freed said that there were nine recovered absentee ballots, adding that seven were cast for Trump, while two other ballots “had been resealed inside their appropriate envelopes”, so their contents “are unknown”.

“At this point we can confirm that a small number of military ballots were discarded,” Freed said. “Investigators have recovered nine ballots at this time. Some of those ballots can be attributed to specific voters and some cannot. Of the nine ballots that were discarded and then recovered, 7 were cast for presidential candidate Donald Trump”.

In an initial statement, now deleted, the Justice Department official said that “All nine ballots were cast for presidential candidate Donald Trump.”

The investigation into the incident was started on Monday by the FBI and Pennsylvania State Police personnel, according to Freed.

“Since Monday, FBI personnel working together with the Pennsylvania State Police have conducted numerous interviews and recovered and reviewed certain physical evidence. Election officials in Luzerne County have been cooperative,” Freed stated.

Later on Thursday, the Justice Department sent a letter to election officials in Luzerne, demanding the county change its “method for processing received military ballots”, arguing that preliminary findings of the inquiry into the incident “are troubling”.

“Even though your staff has made some attempts to reconstitute certain of the improperly opened ballots, there is no guarantee that any of these votes will be counted in the general election. In addition, our investigation has revealed that all or nearly all envelopes received in the elections office were opened as a matter of course,” said Attorney Freed in a letter to Shelby Watchilla, Director of Elections of Luzerne County Bureau of Elections.

Commenting on the discarded ballots, Trump told reporters at the White House that he is “not sure” that the 3 November election, which is only six weeks away, would be “honest”.

“They found, I understand, eight ballots in a wastepaper basket in some location,” Trump said as he departed the White House on Thursday for a trip to North Carolina and Florida, adding that the recovered ballots “had the Trump name on it”.

“We want to make sure the election is honest and I’m not sure that it can be. I don’t know that it can be with this whole situation — unsolicited ballots, they are unsolicited, millions being sent to everybody.”

On Wednesday, the Republican president told reporters he thought that the 2020 US presidential election “will end up in the Supreme Court”, suggesting that it is important to immediately fill the vacancy left after the death of Justice Ruth Bader Ginsburg, one of the nine judges on the Supreme Court, who passed away on 18 September of complications from metastatic pancreatic cancer.

“I think this will end up in the Supreme Court,” Trump remarked. “And I think it's important we have nine justices.”

The next day, in response to a question on whether he would accept the Supreme Court’s decision if it rules a Biden win on 3 November, Trump said during a radio interview that he would leave the White House voluntarily if his Democratic rival former vice president Joe Biden wins the election.

“Oh, that I would agree with but I think we have a long way before we get there. These ballots are a horror show,” Trump suggested. “It's a terrible thing that's going on with these ballots”.

As the 2020 US presidential election is set to take place on 3 November amid an ongoing coronavirus pandemic, additional mail-in and absentee voting have been encouraged in many US states, with many Democrats advocating the move.

More than 65.5 million absentee ballots have already been requested or sent to voters in over 30 states, along with the federal District of Columbia, according to The New York Times. Absentee ballot requests for this year’s general election have already far surpassed those issued in the 2016 election.

According to newspapers, more Democrats are expected to use mail-in ballots than Republicans this year in several battleground states.