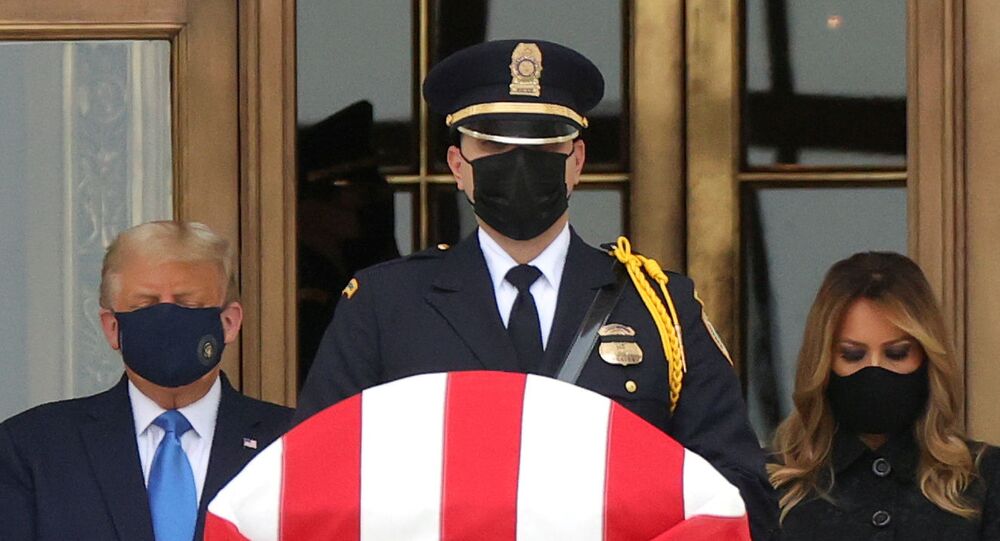 ‘Vote Him Out!’: Trump Met With Boos While Paying Respects to Ruth Bader Ginsburg - Videos

While paying respects to the late Justice Ruth Bader Ginsburg at the top of the US Supreme Court Building’s steps on Thursday, US President Donald Trump was met with booing and a chorus of “Vote him out” and “Honor her wish” chants by a nearby crowd.

Trump, wearing a dark blue face covering while standing next to first lady Melania Trump, paid his respects to Ginsburg, whose body is lying in repose for the second day at the Supreme Court. While he was doing so, protesters standing across the street from the nation’s highest court chanted that Trump should honor Ginsburg’s dying wish and not replace her until a new president is voted in.

​In the days before Ginsburg’s death on September 18, the late justice told her granddaughter Clara Spera: "My most fervent wish is that I will not be replaced until a new president is installed,” NPR reported.

However, despite Ginsburg’s wishes, Trump is expected to announce his nominee for her seat on Saturday and has urged that his choice be confirmed by the US Senate before the November election.

Democrats have strongly opposed Trump’s plans, demanding that whoever is elected on November 3 be the person to fill the vacancy.

In a September 18 statement on Twitter, Senate Minority Leader Chuck Schumer (D-NY) said: "The American people should have a voice in the selection of their next Supreme Court Justice. Therefore, this vacancy should not be filled until we have a new president."

During a briefing Thursday afternoon, White House Press Secretary Kayleigh McEnany said the crowd's response while Trump was paying his respects was "appalling, but certainly to be expected when you're in the heart of the swamp," The Hill reported. She also noted that Trump is often met by supporters during his travels across the United States.

Ginsburg’s casket, currently displayed on the Supreme Court Building’s steps, will be moved to the US Capitol on Friday. Other politicians have paid their respects to the late justice, including US Vice President Mike Pence and his wife, as well as the Clintons.