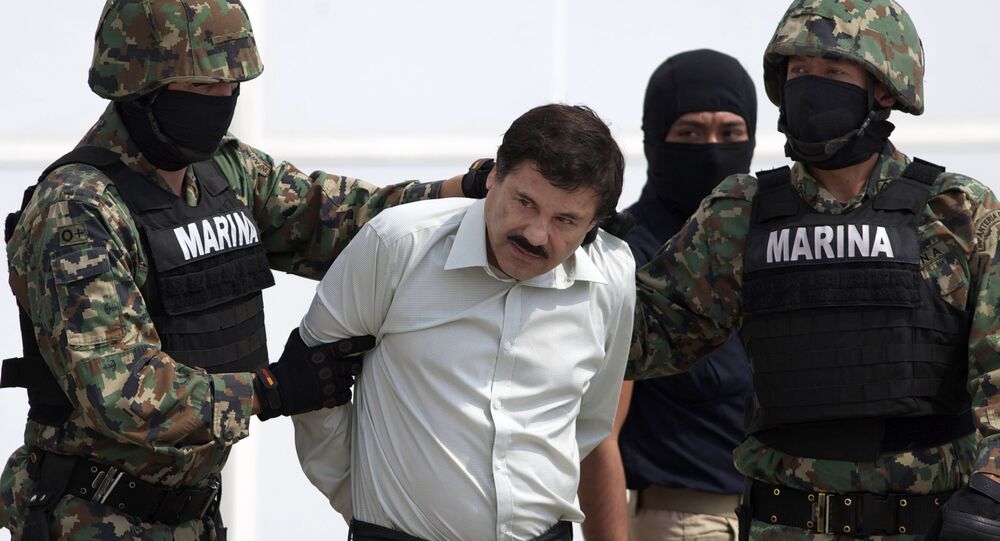 Sinaloa Cartel Is 'Not Dead' But 'Thriving' Despite El Chapo Being Jailed In US, Says Expert

In July 2019 Joaquin Guzman Loera - better known as El Chapo - was jailed for 30 years and ordered to forfeit US$12 billion in cash and assets by a court in New York. Who has filled the vacuum since El Chapo was extradited from Mexico in 2017?

Mexican authorities said recently seizures of the synthetic opioid fentanyl have risen by 465 percent this year and 46 percent more cocaine has been seized since 2019.

But the administration of President Donald Trump has said Mexico must do more to crack down on the production of fentanyl, which is manufactured by the same cartels who smuggle cocaine.

The Sinaloa Cartel are probably the most famous Mexican crime syndicate, due to the exploits of El Chapo.

Jim Creechan, a Canadian sociologist who has studied Mexican cartels for 25 years and is writing a book about them, said the Sinaloa Cartel was a ‘holding company’ which had many different components, some of whom sometimes went to war against each other.

"But perhaps the most consistent quality of the Sinaloa cartel is its resilience and its ability to survive even as leaders are picked off," he added.

Mr Creechan said: "The bottom line is that the Sinaloa Cartel is alive and well and still thriving. It has not been seriously undermined by the loss of El Chapo, but major sources of revenue have dried up."

Experts say reduced traffic across the US/Mexico border due to the coronavirus pandemic may have made shipments easier to spot.

I love that the official narrative cover story for the CIA owned gulfstream II that crashed in Mexico in 2007 while carrying 4 tons of cocaine is that the CIA actually sold it to El Chapo Guzman and didn't own it anymore. Oh okay that explains everything I'm satisfied.

​But Mr Creechan said: "The Sinaloa Cartel is not dead. It is too deeply ingrained and embedded with corporate and justice elements to die easily, or with the loss of one man."

Mr Creechan said four different factions of the Sinaloa Cartel are still in operation and he said that while they still co-operate they also have a “tense relationship” which sometimes leads to confrontations.

El Mayo is in charge of one of these factions while El Chapo's brother controls another faction, his sons control a third and the fourth is composed of shadowy figures who are close to the rival Beltran-Leyva brothers.

Mr Creechan said the cartel’s continuing power was exemplified by an event known as El Culiacanazo when an army commander tried to arrest El Chapo’s son Ovidio in October 2019.

Mexican National Security Director Alfonso Durazo happened to be hosting a regional security meeting in Culiacan on the same day.

Mr Creechan said the cartel mobilised its forces to resist Ovidio’s arrest and the President was forced to issue a "stand-down order", allowing him to escape.

Mr Creechan, who was a visiting professor at the Autonomous University of Sinaloa in Culiacán, said El Chapo was a “paradox of visibility.”

He said: "The real narco bosses and directors were also disturbed by all of the attention that El Chapo attracted. Organised crime works best in the underworld and in invisibility."

Mr Creechan said: “Most mafia bosses would prefer to remain in the shadows and anonymity. But not El Chapo. He relished the publicity and even hoped that his life story would become a Hollywood movie.”

“He had hired a script-writer (who was later murdered) and hoped that Mexican soap-star and Netflix actress Kate Castillo (from Queen of the South) would help him make a movie of his life,” he added.

In New York Times crime reporter Alan Feuer’s book El Jefe, he says the US agencies chasing Guzman were bickering among themselves about whether to follow actor Sean Penn when he flew with Ms Castillo to meet El Chapo in October 2015.

During his trial El Chapo tried to claim the real boss of the Sinaloa Cartel was 72-year-old Ismael Zambada, who is known as El Mayo. Zambada featured in a recent episode of the Netflix series The World’s Most Wanted.

Mr Creechan said one of the 10 charges on the indictment against El Chapo was that he was “head of a crime syndicate”, namely the Sinaloa Cartel.

But Mr Creechan said: “I do not think that the indictment and charges ever intended to say that he was the only "boss" of the cartel. Was he a capo who gave orders and directed criminal activity? Definitely! Was he proven to be the real boss of the cartel? - that question did not have to be resolved in the American jurisprudential system and it is actually irrelevant to the finding of guilt.”

“I do believe that El Mayo was and remains more powerful than El Chapo,” he said.

Mr Creechan said the Sinaloa Cartel’s main rival in Mexico nowadays was the Cartel de Jalisco Nueva Generacion (CJNG) or New Generation Jalisco Cartel, which gets its name from the state which is home to the city of Guadalajara.

This graphic explains which cartels are present in Mexico's 27 states. Note that the Sinaloa Cartel are referred to as the Pacific Cartel (P). Their main rivals are the New Generation Jalisco Cartel (NG).
Source:https://t.co/ZTNssa5isz pic.twitter.com/zrzMe5mvih

​He said: “They are different in several respects. The Sinaloa cartel has deep roots with legitimate businesses and the economy, and it continues to be supported by politicians, police and business elite. In spite of its occasional displays of violence, it is much less violent than the CJNG.”

A graphic video circulating on social media this week shows the CJNG beheading a rival.

The CJNG is dependent on the production of synthetic drugs like fentanyl and is now a major player in the oil and gas industry, said Mr Creechan.

Mexico's homicide rate has been stuck at around 3,000 murders per month since 2018, before President Andres Manuel Lopez Obrador - known to all as AMLO - took office.

Mr Creechan said Sinaloa and the CJNG were generally respecting each other’s territory and the main violence in Mexico today is from both cartels trying to suppress smaller gangs like Los Viagras and the Santa Rosa de Lima Cartel.

Mr Creechan said he did not believe the FBI, DEA, or Department of Homeland Security were monitoring Mexican cartels to the same degree they did when they were searching for El Chapo.

He said AMLO’s government had “failed to do anything meaningful” to combat the cartels.

“I am forced to conclude that there is no foreseeable end to violence and corruption,” concluded Mr Creechan.