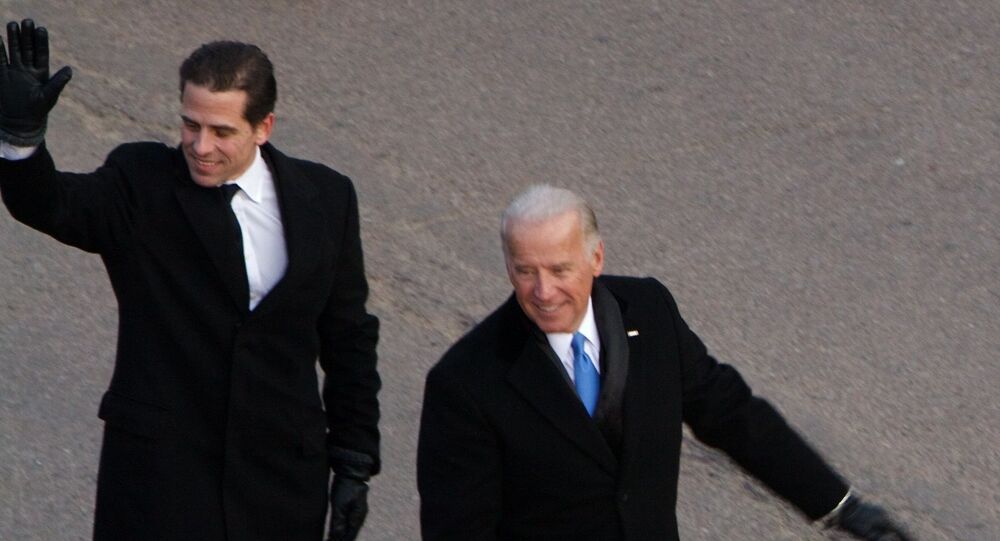 On Wednesday, Senate Republicans issued a report about Hunter Biden’s position at Ukraine’s Burisma Holdings while his father Joe Biden, then the US vice-president, was overseeing the Obama administration's policy for the country. The report eventually alleged that Hunter Biden’s post on the company’s board of directors was “problematic”.

Hunter Biden, son of Democratic presidential candidate Joe Biden, has allegedly sent “thousands of dollars” to people who have links to human-trafficking rings, the sex industry or prostitution, according to a footnote to the GOP report cited by the New York Post.

The 87-page report focusing on Hunter's previous business dealings in Ukraine was released by Republican-led committees on Wednesday, alleging that his post in Kiev-based Burisma Holdings group was “awkward” and possibly interfered with “efficient execution of policy” in regards to Ukraine.

The Senate Republicans ultimately concluded that the impact of this work was “unclear”, but in a reported footnote to the section detailing “criminal concerns and extortion threats” involving the Biden family, they alleged that Hunter “has sent funds to non-resident alien women in the United States who are citizens of Russia and Ukraine”.

It was then suggested, citing unspecified records, that these women in question “have subsequently wired funds they have received from Hunter to individuals located in Russia and Ukraine.”

“The records also note that some of these transactions are linked to what ‘appears to be an Eastern European prostitution or human-trafficking ring,’” the report adds.

The senators also alleged that although there was “extensive public reporting concerning Hunter's alleged involvement with prostitution services”, the “records on file with the Committees” do not necessarily confirm or reject these reports.

However, they said, the transactions do confirm that the former vice-president’s son sent significant funds to those individuals “who have either: 1) been involved in transactions consistent with possible human trafficking; 2) an association with the adult entertainment industry; or 3) potential association with prostitution.”

The same report insisted that Hunter had had a “financial relationship” and even received a $3.5 million wire transfer from Russian billionaire Elena Baturina, the widow of Moscow's former mayor Yury Luzhkov. According to the senators, between May and December 2015, Baturina sent 11 wire transfers to the tech startup BAK USA, but nine of them were first sent to Hunter’s Rosemont Seneca Partners investment fund and only then moved to the company, which filed for bankruptcy in 2019. The nature and purpose for these alleged transactions remains unclear. However, the report says that all 11 wires were described in the payment section as “Loan Agreements”.

The committees insisted that records obtained from the US Treasury Department unveiled “potential criminal activity relating to transactions among and between Hunter, his family, and his associates with Ukrainian, Russian, Kazakh and Chinese nationals.”

Hunter Biden Under Fire (and Joe)

Joe Biden’s son assumed the position at the board of Ukraine’s gas-producing Burisma Holdings in 2014, with the development taking place shortly after a coup d’etat against Ukrainian President Victor Yanukovych. Hunter Biden’s role in the company, which he held until 2019, was widely scrutinised by American lawmakers and US president Donald Trump himself, who accused Joe Biden and his son of a conflict of interest and alleged corruption, as the former vice-president was then overseeing policy regarding Ukraine under Barack Obama’s presidency. Joe Biden later publicly bragged about having been able to influence the dismissal of Ukraine’s prosecutor-general Victor Shokin, who was investigating Burisma Holdings' alleged corruption activities. Shokin was removed from his post in March 2016.

Trump repeatedly pushed for the investigation into the matter, something which has led to high-profile impeachment hearings last year, with US House Democrats insisting that the POTUS has threatened Ukrainian President Vladimir Zelensky to withhold hundreds of millions of dollars of US aid to Ukraine if the country does not investigate Biden family’s alleged corruption. Trump was impeached by the House of Representatives in December 2019 and was then acquitted by the Republican-controlled Senate.