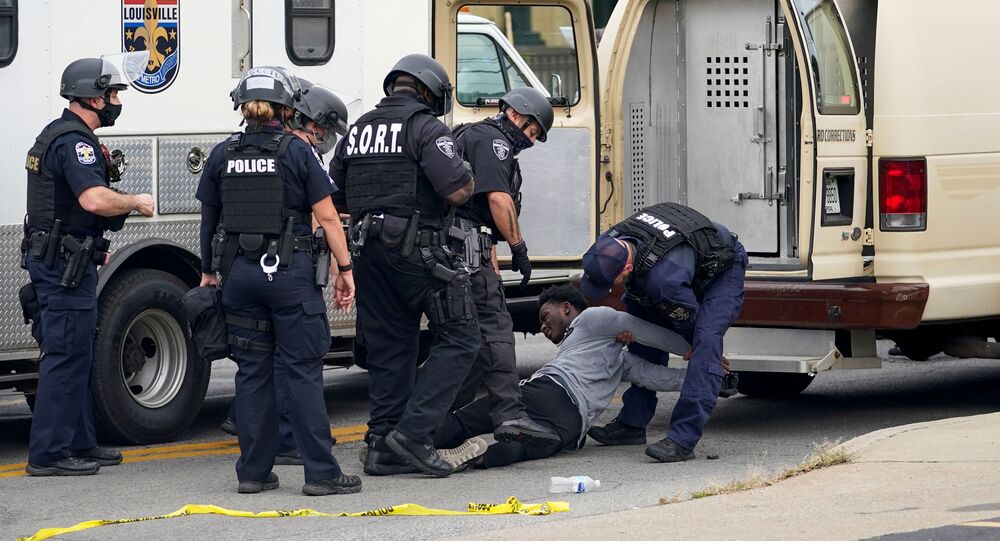 Violent protests have erupted in Louisville, Kentucky in the wake of grand jury's ruling not to indict police officers accused of shooting unarmed African-American Breonna Taylor and killing her at her home in March.

The Louisville police have conducted nearly 100 arrests overnight as protests engulfed the city following the court ruling to clear police officers, accused of Breonna Taylor's murder, of their charges.

According to a police statement cited by AP, protesters attempted to wreak havoc in the city, loot local businesses and jump on city vehicles. Several protesters were arrested for curfew violations after refusing orders to disperse, the statement adds.

The police also said that the lives of the two officers shot during the demonstration were not threatened. The statement, however, provided no further details about the identity of the suspect accused of opening fire against the policemen.

"Continued demonstrations around the country are mostly an understandable reaction to a series of unjust police actions. Still, no good purpose is served when demonstrations become violent, although the number of violent demonstrations is small compared to the attention they have received", says Robert Spitzer, political science researcher at State University of New York College at Cortland.

Spitzer points out that the term “defund the police” - often brought up by the Black Lives Matter protesters - was a "bad label from the start, as it implies dismantling police forces by depriving them of funding. That would be a terrible mistake".

"Most supporters of this idea really mean reforming police organizations, and that is a good and necessary step. On the other hand, law and order is always important and necessary. The police are also entitled to support given the many tasks they must perform on a daily basis. Support for the mission of police needs to be united with reform. Both should occur", he elaborates.

Protests erupted on Wednesday after a grand jury refused to charge police officers with the March killing of Taylor, a 26-year-old African American medical technician, in her Louisville home. The state attorney general said the deadly use of force by the police officers involved was justified in order to protect themselves. One of the officers was still charged with wanton endangerment. Soon after the announcement, clashes between protesters and police broke out in Louisville. Two officers received gunshot wounds.

Taylor was killed in her home in March when police officers executed a drug search warrant. Taylor's boyfriend allegedly fired the first shot in self-defence, fearing the entrants were burglars, which prompted the police officers to unleash a hail of bullets on the house, hitting Taylor several times.