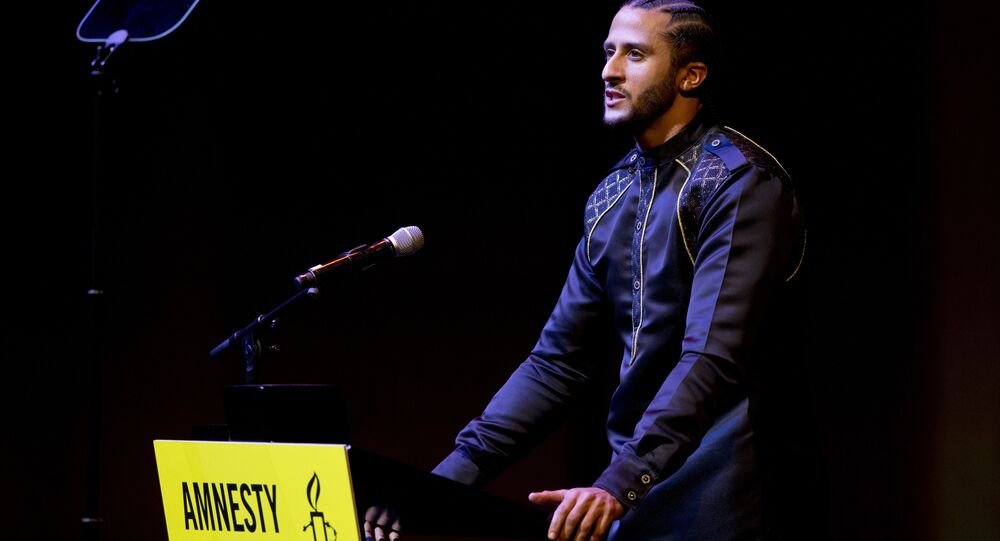 As the United States is rocked with nationwide protests against police brutality and racism, Louisville, Kentucky, has become another hotspot for outrage after an announcement that white police officers involved in the killing of a Black woman, Breonna Taylor, would not be prosecuted over her killing.

Colin Kaepernick, a former NFL star player and civil activist, slammed the recent move not to charge the involved police officers for the killing of Breonna Taylor, demanding that "the white supremacist of policing that stole Breonna Taylor's life" be abolished

"The white supremacist institution of policing that stole Breonna Taylor’s life from us must be abolished for the safety and well being of our people", Kaepernick tweeted on Thursday.

Kaepernick started the trend to kneel during the US national anthem before football games, in a gesture symbolizing protest against long-standing practices of racism and police violence against African Americans in the country.

Some users criticised the tweet, suggesting that "Abolish the Police" is not the right message and that systemic racism can be defeated without dismantling police departments.

Colin, what institution will be built in this unjust systems place that will actually protect its citizens? We agree that the current system is not working, but shouldn't we focus our energy on how we will rebuild a better system to protect all Americans?

​Some offered a different message, urging Kaepernick not to become too radical.

I support the cause homie but Abolish The Police is a terrible slogan. Reform The Police. Rebuild The Police. Much better. Right Wingers cling to that abolish word

I love you but I would frame it a bit differently since not all police is bad. That we reform policing.

​Others, however, supported the activist, rejecting suggestions of reforms and urging to "continue to hit the streets".

💯 We must reject ALL reforms & continue organizing to abolish police! We cannot reform or expect justice from a system built on a foundation of oppression & violence. May we continue to hit the streets, alongside all the tactics necessary to dismantle & rebuild 🔥✊🏽✊🏿✊🏾🔥

Murders walking around free like nothing happened while a black woman is dead. Those people who made this decision are apart of the problem. I am 1million % sure if she was white & the killers were black they would be in prison or dead right now. No excuses

​The announcement by the Kentucky Attorney General Daniel Cameron that police officers involved in the killing of Breonna Taylor will not be prosecuted for her death, as they claimed to be protecting themselves, has caused national outrage, with mass protests erupting in Louisville. At least two police officers have been shot by an unknown assailant who is now in custody during the protests as rioters clash with cops. Police are using rubber bullets and conducting multiple arrests.

Breonna Taylor, a black woman aged 26, was fatally shot during a 'no-knock' police raid, as her boyfriend opened fire at what he claimed he initially thought was an armed house break-in. He later stated that the police did not identify themselves, prompting his violent response. Police responded with dozens of shots, five of which struck Taylor, killing her instantly.

Her death, along with the killing of George Floyd in police custody in late May, has sparked a new wave of nationwide protests against police brutality and racism in the United States.