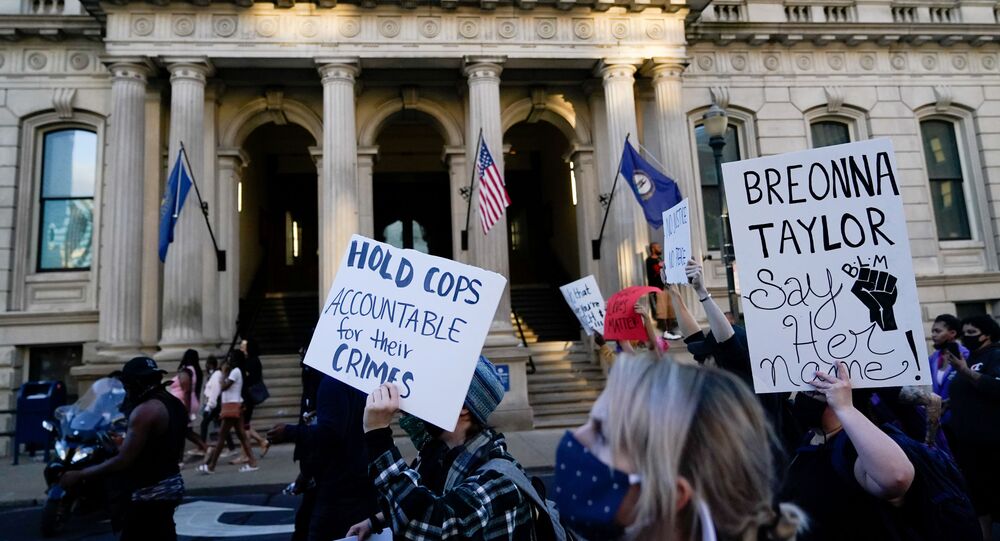 Renewed Black Lives Matter protests have broken out across the US in the wake of a Wednesday decision by a Kentucky grand jury not to indict for murder any of the officers involved in the shooting death of Breonna Taylor, a 26-year-old Black woman, on March 13. In Washington, DC, demonstrators gathered outside the US Department of Justice.

The Kentucky National Guard has been called into Louisville, where a 9 p.m. local time curfew has been scheduled amid nationwide protests triggered by the grand jury’s decision regarding the Louisville Metro Police Department (LMPD) officers involved in Taylor’s death.

Protesters gathered Wednesday evening at the DoJ building in downtown Washington, DC, and began marching and demanding justice for Taylor.

Taylor was killed when three plainclothes LMPD officers executed a no-knock search warrant at her apartment and her boyfriend engaged them, believing them to be intruders.

Of the three LMPD cops involved - Brett Hankinson, John Mattingly and Myles Cosgrove - Hankinson, charged with first-degree wanton endangerment, was the only officer indicted. The former detective was fired from the LMPD on June 23.

Activists online and in the streets have demanded that Hankinson, Mattingly and Cosgrove all be brought up on more serious felony charges in connection with Taylor’s death.

Federal Bureau of Investigation ballistics analysis revealed that of the 20 shots fired by officers, the bullet that killed Taylor was fired by Cosgrove.

Over 40 Razor Blades Found at Parks, Playground Equipment in US City