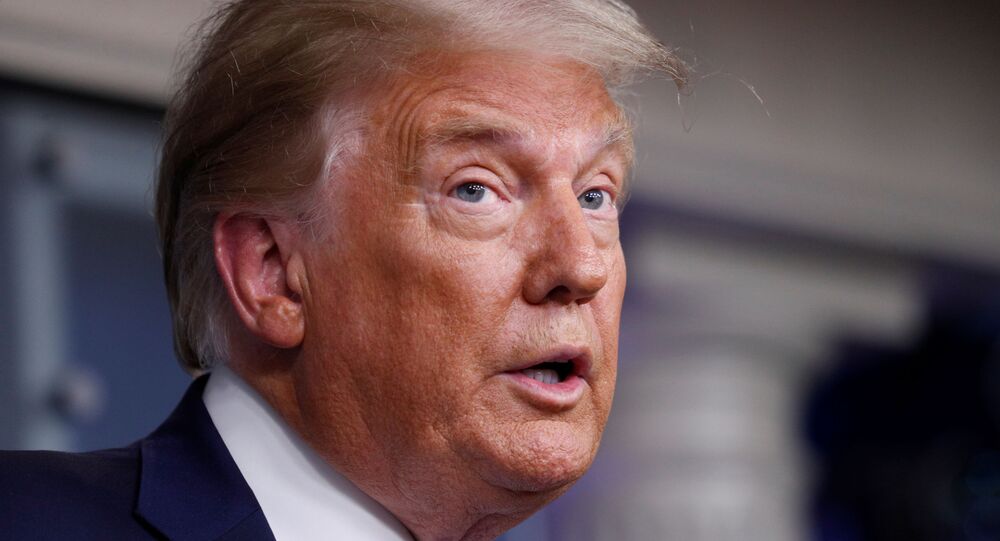 US President Donald Trump told reporters on Wednesday that, in the event that he loses the 2020 presidential election, he could not guarantee a peaceful transfer of power to Democratic nominee and former Vice President Joe Biden.

"We’re going to have to see what happens," he told reporters during his Wednesday news conference, noting that mail-in "ballots are a disaster."

"It'll be a continuation. The ballots are out of control."

Q: "Will you commit to making sure that there is a peaceful transferal of power after the election?"

Trump: "...There won't be a transfer frankly there'll be a continuation." pic.twitter.com/Q4cmSPqdvB

Trump abruptly departed from the Wednesday news conference and told members of the press that Director of the United States National Economic Council Larry Kudlow and Scott Atlas, White House adviser on the COVID-19 novel coronavirus, would answer the remaining questions as he as took an "emergency phone call."

However, at least one reporter claims to have gotten a different word on Trump's phone call.

Although Trump told us he was ending his remarks at the press briefing because "I have to leave for an emergency phone call," he doesn't have an emergency, I'm told. He's got politicking to do. He's speaking on two tele-events tonight.

​Trump has continuously argued that the November election would be a "scam" or "rigged" due to mail-in voting, which many Americans are relying on due to the ongoing COVID-19 pandemic.

Sending out 80 MILLION BALLOTS to people who aren’t even asking for a Ballot is unfair and a total fraud in the making. Look at what’s going on right now!

“They’re sending out tens of millions of ballots to everybody, people that didn’t expect them. People are getting inundated with ballots, they’ll be showered with ballots,” Trump said on Friday.

"Mark my words: I think he is gonna try to kick back the election somehow, come up with some rationale why it can't be held," Biden predicted in April.

However, Biden told Comedy Central's "The Daily Show" host Trevor Noah in June that he was confident that if Trump lost the election and refused to give in, military personnel would "escort him from the White House with great dispatch," CBS News reported.

"This is the guy who said that all mail-in ballots are fraudulent, voting by mail, while he sits behind the desk in the Oval Office and writes his mail-in ballot to vote in a primary," he told Noah.